Micolash, Host of the Nightmare Information

The Chase: Before he runs into the first room, have someone stand in front of the door (preventing him from entering). The other person is free to chase and hit him without him retaliating. After he disappears and goes into the next area, have someone stand in between the next dead end room and the middle of the room where he spawns after hitting him (This prevents him again from leading you into the final room to which there is no exit until you beat him. Allowing the other person to chase and hit him without him trying hit back). The person blocking the way is also able to get a hit in now and then; the Cannon is recommended because of its range and damage, plus buffed by the Bone Marrow Ash makes it work very well.

Strategy 2 (Killing him in Phase 1)

You can skip his second phase by killing him before he reaches the second room. For that, get him down to 50% in the first room. He will disappear. Go up the stairs and find him. Chase him till he jumps down from a ledge. DON'T follow him. Instead go down the stairs and attack him. Instead of going to a dead end he will run down the stairs. Follow him and get a few hits - he will disappear. Now go back to the place where he jumps down. He will wait along the way. When he sees you, he will run to the ledge. You can go back to the room where he lands. Now you're standing in the room to which he jumps - he is standing on the balcony. Run underneath him - he will jump; when he lands, get a few strikes. He will disappear and spawn on the way to the 2nd floor. Make him jump from the ledge again. With each jump you'll be able to land 1-2 hits and eventually you'll kill him without dealing with the second phase.

Do the first phase of the fight normally. Then, when he teleports, follow him until you reach the top of the room where he drops. Don't drop after him. Instead, switch to your cannon, press up to get +5 QS bullets and fire at him. Repeat until you're completely out of bullets. Don't forget to heal at some point. He should now be pretty low on health and you should be able to get him with a plunge attack. Alternatively, you can use any other kind of ranged attack, like Poison Knives, or you can increase the effectiveness of your firearms with Bone Marrow Ash.

For the first half of the fight deal with the skeletons quickly and then circle around Micolash hitting him with L2 attacks using Ludwig's in greatsword mode. If you just continuously walk around him while locked on and just out of sword reach, he will miss. When he runs away up to the point where you have to jump down through a square hole to fight him again - as for Strategy 3, any ranged strategy will probably work. Poison Knives are very effective. Two in quick succession will poison him. You won't see any damage counter but he will start running back and forth and his life bar will decrease until it wears off, at which point he will stand still again. It takes about 3 or 4 rounds of poison to kill him.

Follow Micolash around for the first half of the fight right up until he enters the room where you will fight him. There are several paths from here, when you enter there will be two floating enemies dispatch them from a distance and always keep an eye on Micolash because he uses a tentacle attack (Augur of Ebrietas) or you can lure Micolash out into the small corridor before the room, here he won't often attack so you can safely finish this stage. For the most part the first stage is easy because he only has the tentacle attack, but once he gets to around 50% health he relocates to a different part of library; follow him again until he has locked himself in the room. From this point on things will get a lot harder. First of all look around the maze for the drop in location. When you drop, start the fight with a plunging attack (I fought him with a +8 Ludwig's Holy Blade while using the highest arcane resistance gear I had, along with Fire Paper and Bolt Paper ). If you fail this he will usually use A Call Beyond which can one shot you, so be careful. For the rest of this fight you want to be super offensive. His melee attacks deal little damage and his tentacle attack is easy to dodge; there is no consistent way to dodge A Call Beyond, but he can easily be staggered while using this attack.

If you happen to be using weapons that don't stagger enemies (such as the Tonitrus) then the second half of this fight is nominally more difficult as you cannot stop Micolash from casting A Call Beyond if he gets into it.

Before you head to the boss room, head to the Hunter's Dream and make sure to equip the highest level Anti-Clockwise Metamorphosis run you happen to have. This will grant a higher maximum stamina which will be invaluable in this fight. Head to the fight and do the first half as directed above. In the second half, get him into his final room, then prepare yourself. Before you drop into the room, make sure you're at full health, then use a Bone Marrow Ash to buff your gun and a Beast Blood Pellet to increase your damage output. Peer over the ledge and lock onto him, then fall into the room and do a roll as you land. Not only will this minimize the amount of damage you take from the fall but it means you'll be ready to fight immediately.

Chances are Micolash will land a couple of punches on you, don't worry about this, instead get aggressive and combo him as much as possible. When you've got a small sliver of stamina left, dodge to the side and let him use the tentacle attack. Before he turns back to you, fire off a couple of shots from your gun. You won't do too much damage to him but you'll keep him from moving away to cast A Call Beyond. He should step back, so catch up to him, rinse and repeat. If you can get him pressed up against a wall, even better. The whole trick to surviving the second portion of the fight is to make sure that he doesn't cast A Call Beyond, so stay close to him, use regain to keep yourself alive (even if he hits you with the tentacle attack) and he'll go down quickly.

If you have enough arcane to use the Blacksky Eye, and enough insight to cause Micolash to jump through the mirrors, you can kill the boss before he gets to any of the "fighting rooms".

When you first cross the nightmare fog, Micolash will always be standing in the same place to start out with (up the stairs to the right, then down the hallway to the left). Normally, he will start to run when you get close enough to him, but with the Blacksky eye, you can stand far enough away from him to hit him with the spell, but not so close that he starts to run away. When nearing the 50% health threshold, Micolash may attempt to run for his first fight room, but can easily be interrupted and cut down, as you would be standing between him and his room.

For his second phase, you will need to chase Micolash until he starts jumping through mirrors, then go to where you would normally drop down on him, only to have him run into his second fight room and close the door behind him. Instead of dropping down, simply stand on the ledge and continue to use the Blacksky Eye to whittle his health away. Each hit with the eye will cause him to vanish, then reappear in the mirror behind him.

This method is very reliable and easy to utilize, mostly because you don't have to worry about his use of A Call Beyond.

If you have the Bowblade and plenty of ammo/blood vials, you can cheese this fight.

Progress the fight as usual and after you've gotten his health down to 50%, and he disappears, head upwards and pursue him until he runs into the first mirror. Now head to the right onto the balcony, and into the small room with a hole in the floor. Drop through but take a second to look around. You should see two skeleton puppets/mannequins yet to wake, and down the corridor Micolash is waiting in front of another mirror.

Walk forward slowly and kill the two mannequins that will wake. Be careful not to move too far down the corridor and trigger Micolash's running away.

Once the mannequins are dead, get your bowblade out, and walk slowly down the corridor until you can just lock onto Micolash. Once you can, use R2 to fire a powered shot at him. Micolash will be knocked backwards into the mirror, and come rolling forward out of it once again, only to stand still in the same spot.

Repeatedly damage him using R2, using blood bullets if you need to, and re-killing the mannequins as they wake up (still being careful not to trigger Micolash running), and he'll be dead in no time.

Strategy 9 (Aggro and fight through the gate)

If you have a gun which can hit through walls (such as the blunderbuss) and a decent-range melee weapon such as the axe or threaded cane, you can cheese the second half of this fight.

After you’ve got Micolash down to half health, he will teleport away from you and go to the second part of the arena. He will run away from you again and will lead you to the second fight room. This room has a gate which drops down after he enters but before you can enter.

Now you want to kill all the puppet men in this room and equip a gun like the blunderbuss which can hit him through the gate. Stand right up against the gate and shoot the blunderbuss at him. This will aggro him and he'll start running towards the gate to attack you. You can then use a long weapon like the hunters axe (in its two handed form) or threaded cane (in whip form) to hit him through the wall. He might try to cast a magic attack or try to punch you through the wall, but he didn't do this in my playthrough. The puppets may also respawn after some time, but if your melee weapon is powerful enough he should be dead by this point. 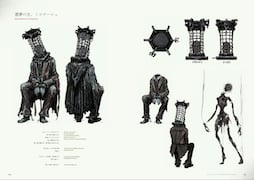 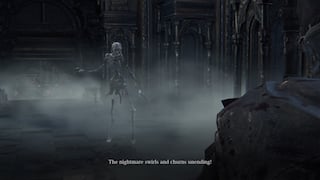 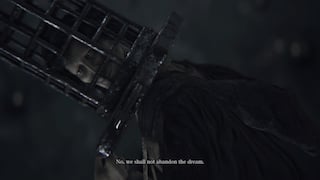