During the first phase, the first and second Shadows will be extremely aggressive and chase you around while the third will fire soft-homing fireballs at you that come in waves of three. This puts you in a very evasive position and the obvious course of action is to kill the third ASAP. The third tends to hang back from you compared to the others, leading the first and second away from the third is recommended. Obstacles throughout the arena are useful for stalling the aggressive pair's movement. When the third becomes isolated, charge at him and beat him down, but watch out, because the other two will be on you again quickly. The first is the most aggressive, but that doesn't mean you can ignore the second. The second will occasionally blow on his candle and unleash a flame in a wide arc that tracks you. If you're caught in the middle of it you're likely to die, but if you can get away from it you should survive just fine.

After you've done enough damage to kill one of them (you don't actually need to kill one of them, but just do enough damage between the three that one would be dead if all that damage was stacked on them), the Shadows reveal their inhuman nature. Their movesets change at this point, becoming rather bizarre; they can stretch their limbs at odd angles. You'll find that this increases their range immensely. If you put too much distance between yourself and the two melee Shadows, they'll hit you with melee attacks with a near unlimited range. There's very little wind up to these attacks, meaning that you've got an incredibly narrow window to dodge. If they land one of these attacks they can take off significant amounts of health.

At this point the second will light his scimitar on fire, if you attack him during this animation and manage to stagger him, you can prevent this weapon buff. The third will occasionally shoot the fireballs up in an arc rather than fire them in a wave now, where the fireballs land will leave a patch of fire. Otherwise, the second phase is largely the same. After killing the third, focus your attention on killing the first Shadow, as it is more aggressive. Use the obstacles in the area to separate the two remaining Shadows, but be careful - when the Shadows stretch their limbs for their attacks, it seems they can clip through the obstacles.

After killing your second shadow, the remaining shadow gains an extra ability; a new "summoning" ability wherein he will pause for a moment, become enveloped in a crimson aura, and cause several ENORMOUS serpents to rise from the surrounding mire and attack you. It doesn't matter which Shadow is left alive, all three are capable of this attack when they're on their own. In practice, they're not so much enemies as an attack unto themselves, as they'll eventually go away. Their range covers pretty much the entire arena, so keep on your toes. If you're feeling brave, when the Shadow gets down on his knees to summon you can sprint in and land a couple of hits. You can interrupt this summoning process if you can get enough hits in quickly enough which will stop the snakes appearing.

If you're having trouble with the snake spawns in the last phase, try to leave the third Shadow until last and then stay right on top of him attacking constantly. It takes a second for his fireball to wind up so you can interrupt it and if he's being hit he won't stop to summon the giant snakes. The only thing to look out for is his occasional mace attack.

This strategy makes the fight trivial. Focus the fast katana user first, and kite around the fire mage. Use obstacles in the arena to block his fireballs. Once the first katana user is dead, there will be two left. The now snake bellied fire caster, using AoE bursts of flame (simply avoid the areas he's shooting), and the one with the flaming katana. The one with the flaming katana is promptly named "Happy Feet," because he does nothing but sidestep you. This has happened to me twice now, both NG and NG+, and I'm not sure if it's supposed to happen, but all he does is sidestep you. You can pin him in to a corner, or just laugh at him, but all he does is dodge sideways. To finish the fight, simply pin him in a corner and attack him to death, he will not ever attack. For both fights I used Ludwig's Holy Sword in greatsword form. After happy feet is dead, the fire caster will pull out an Tonitrus without any lightning buff, and poorly try and hit you with it. It does some damage, so watch out, but nothing to stress about, as he is very slow and short range.
(This seems to only have happened due to a bug where enemy AI would become extremely simple if the game was left on for too long. It no longer happens, and the AI will attack as normal on current patches.)

The fight is tough, especially on NG+ but don't give up. This strategy involves killing the caster first. This seems obvious but the strategy begins to work once it is dead. I chose to wear high fire resist armor for the times I made mistakes. Anyways once the caster is dead, next start to work on the katana only boss. The trick for the 2nd phase is to keep both bosses in line of sight and keeping a certain distance. Once you find the distance they seem to become incredibly predictable. This strategy is designed to take away the advantage the boss has which, at this point is 2 AI threads running independently. If you properly distance yourself you can bait the katana wielder to do a normal melee attack while the other breathes fire. Once you get in this rhythm you can start to parry the katana wileder consistently. The AI may to do some weird things so pay attention during this second phase cause it isn't guaranteed to keep them from doing something random. The idea is to get as many V-attacks on the katana wielder. This will mitigate the damage you take by giving you i-frames and healing you if you use the proper rune. Also if you wear the Charred set, the damage the candle boss will do is reduced. If you can get through this second phase you should be in great shape for the last phase.

The last phase should be simple. Stay aggressive and bait attacks to push the last boss into a corner. As long as you keep stamina and consistent Damage you shouldn't have a problem.

This is a very tough fight on New Game+. Prepare to die, and be very patient. Focus only on one at a time. Out of the three the most annoying one is the fire caster. Focus on him first, and kill him as fast as possible. Use the giant tomb stones, and the little ones as cover perpetually so you can draw the two swordsmen away from the fire caster. Once you get him low enough they will all transform. That's when you kill him as fast as possible and start focusing on the other two. Next one to kill is the one with the katana. This one is also very annoying. Since he is already transformed he will have long range sweeps and a uppercut thrust which deals a lot of damage. Just keep circling and use the tombstones as cover again. Use the Hunter Axe in trick form to do a sweep attack knocking them back repeatedly over and over. If you can use your pistol to counter him when he is in the middle of an attack, this will make it go by a lot faster. Once you have killed the Katana wielder rush to the last guy and do not let him breathe. Continuously attack him because he can summon snakes at this point which will kill you in one hit. DO NOT LET THAT HAPPEN. Keep on him and you will find success.

The hardest boss battle in level 4 run can be made somewhat easier if you know what you are doing. First you have to prepare for the fight. You need two important things. Shaman Bone Blade (Brainsucker near Alfred NPC and the Forest entrance drops those) and piece of tape or some object to put in front of your TV to mark the exact place in the healthbars that triggers the phase two. Damaging the shadows in phase one is much easier than in phase two so getting the melee Shadow and the Mage as low health as possible before triggering the phase two is essential. Once those two are in low health (like 33%) and the next swing would trigger the phase two get the Shaman Bone Blade ready. Trigger the second phase by attacking and when the Shadows are transforming hit either the Katana or Mage with the Shaman Bone Blade. This way Shadows will fight each other and with luck kill the Bone Bladed one so you only have to worry about the last remaining two. I recommend to kill the melee Shadow with Bone Blade since the Mage has lesser health pool and is maybe easier to finish off later. Try to trigger the Candle Shadows fire breath attack and then run to the low health Shadow. Either kill him by attacking or use another Shaman Bone Blade if you can. After the second one is down just run to the last one, swing once and walk forward to create the famous loop strat.

Have bloodtinge of 30 or higher ten bone marrow ash an Evelyn pistol 20 blood vials 20 bullets and any weapon that's +6 to +10. Find the one shadow you just hate with your whole heart, use your bone marrow ash on your Evelyn pistol for each shot, if he isn't dead kill him off with your weapon. If you don't kill the one with the candle first go for him this is where you use fire paper. Once its just one left avoid attack when possible, and NEVER EVER let them do the ground touch, it summons annoying ass snakes. Sadly I'm unable to help with how to dodge the attacks either find what works for you or use the guide above. Thankyou for reading my strategy. 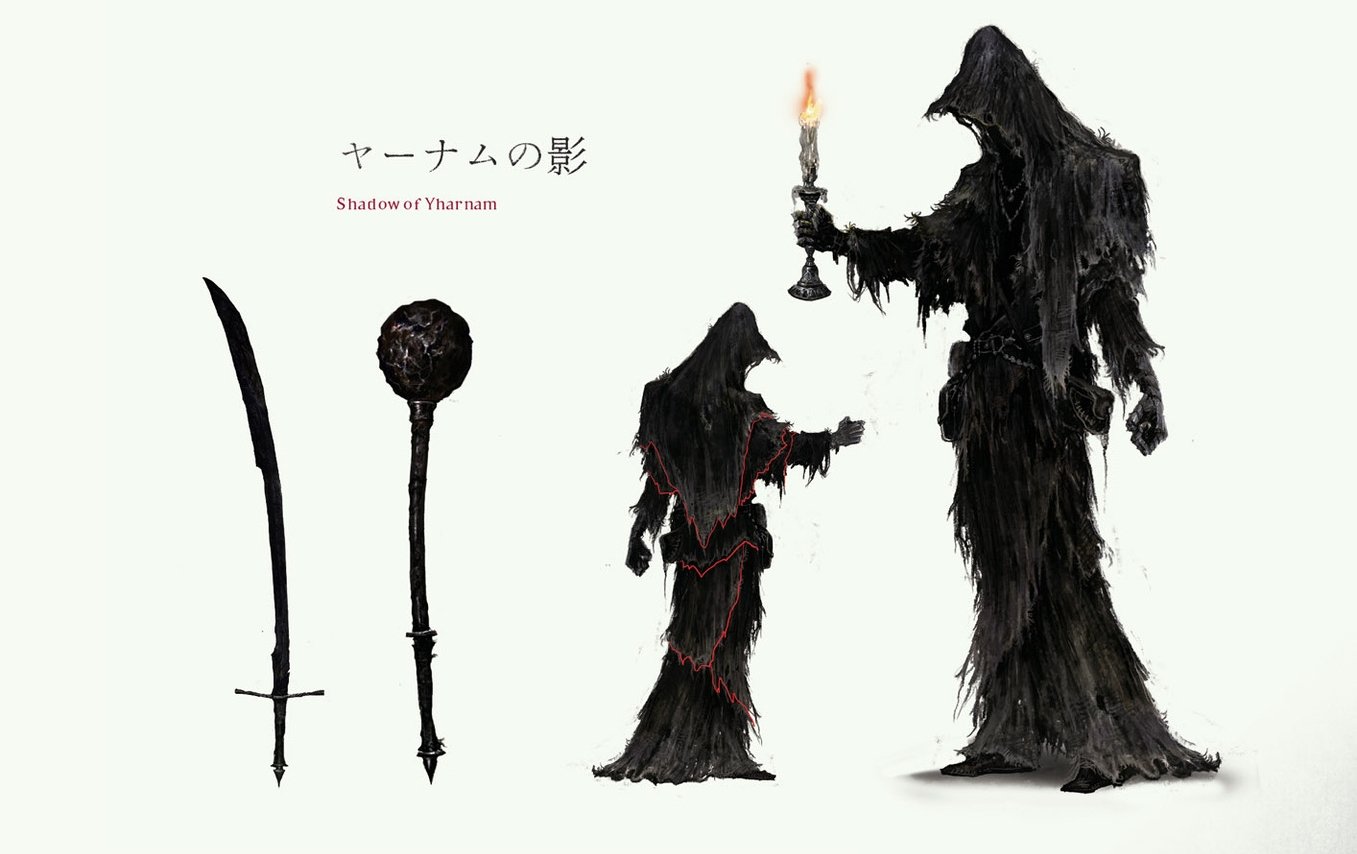 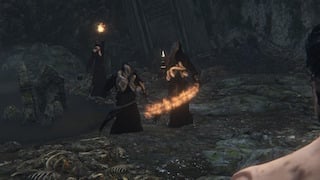 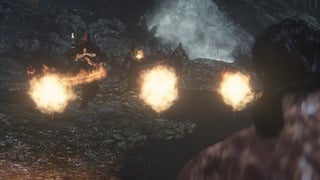