Byrgenwerth is a location in Bloodborne. It is a former building for higher education, discovered immediately after the Shadow of Yharnam boss fight. Go ahead a short distance, fight one enemy, and you arrive at the Lamp. 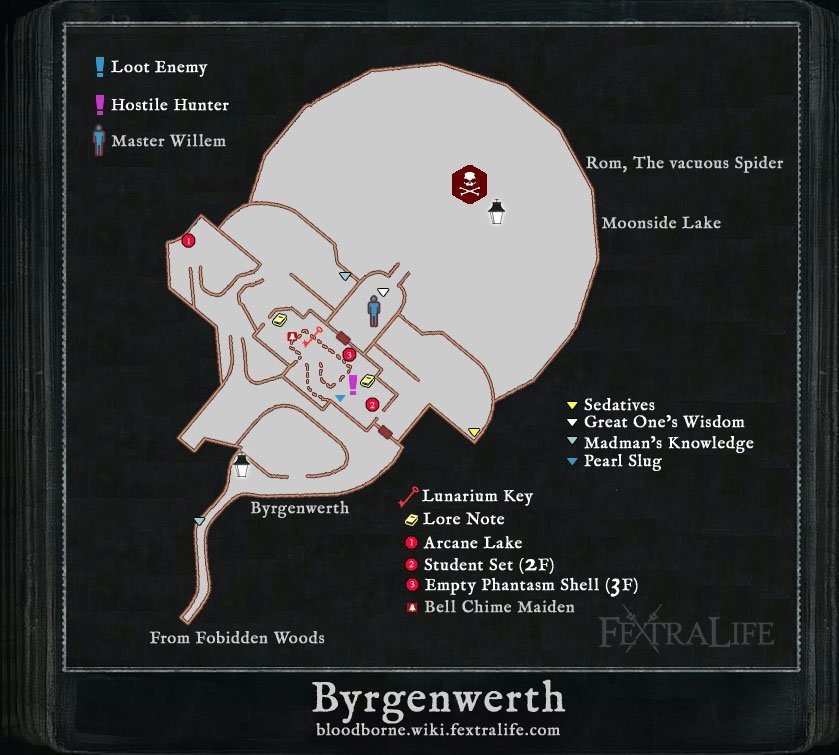 Bygernwerth is an area situated directly past the Shadow of Yharnam boss fight in Forbidden Woods. From the Forbidden Grave Lamp, head away from the Woods though an arched doorway into a narrow wooded tunnel. Keep an eye out for an ambush by a Mi-Go that is hiding behind some trees on your right at the end of the tunnel. There will also be a corpse with a Madman's Knowledge to your left. After you exit the wood path the Byrgenwerth Lamp will be directly in front of you. 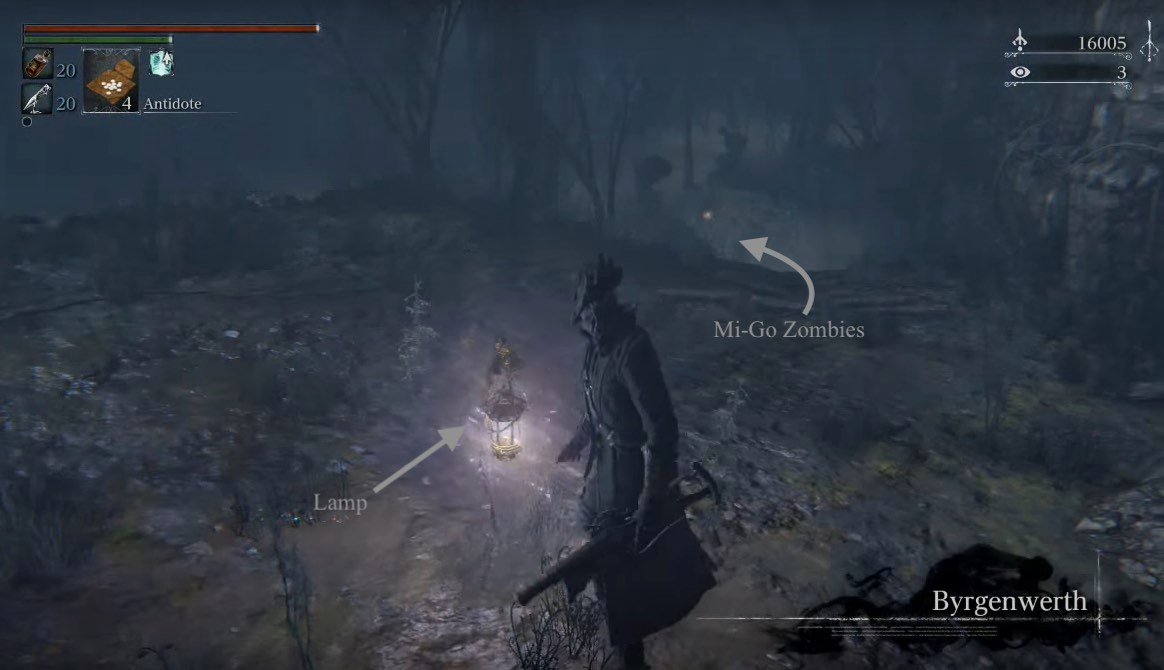 If you head down the stairs on the right, there are 3 more Mi-Go Zombies in this area. Take the first one you see down here. Head left and wait for the one patrolling to move away from the tree on the left, then head there and kill the second then finally go over and kill the last one. It is better to try and pull them one at a time and avoid their flying jump/grab since it will induce frenzy. Keep some Sedatives handy. After this, head up a small stairwell to the right, sticking to the left wall to ascend a small stonewalled path and some stairs into a clearing with a tree in the center. There is a Brainsucker behind the tree. Dispatch it carefully and then pick up the Arcane Lake near it.

The gate at the bottom of that first stairwell is shut for now but can be opened up to provide a shortcut later.

Run back out of the clearing the way you came and down the steps further. You should find yourself in a courtyard, next to another closed door on the side of a building. Head to the left of it, down towards the lake. Head down the central path under the bridge on this side of the building, being careful of the Celestial Centipede on the other side that may throw some fireballs at you. Pick up another Madman's Knowledge on your left which will trigger 2 more Zombies dropping down from the bridge above. Pull them back away from the Centipede and take them out.

Once they're taken care of head back to the Centipede, making sure to dodge its fireballs. Get behind it and just wail on it 'til it goes down; it is also susceptible to poison, so you may want to use Poison Knifes if you have any. Underneath the balcony on the left hand side you can find a Great One's Wisdom. Be careful, because there is yet another Zombie on the far side of the circular rotunda that the Centipede occupied. Also pick up x5 Sedative on the far side of the rotunda where it was hanging out. 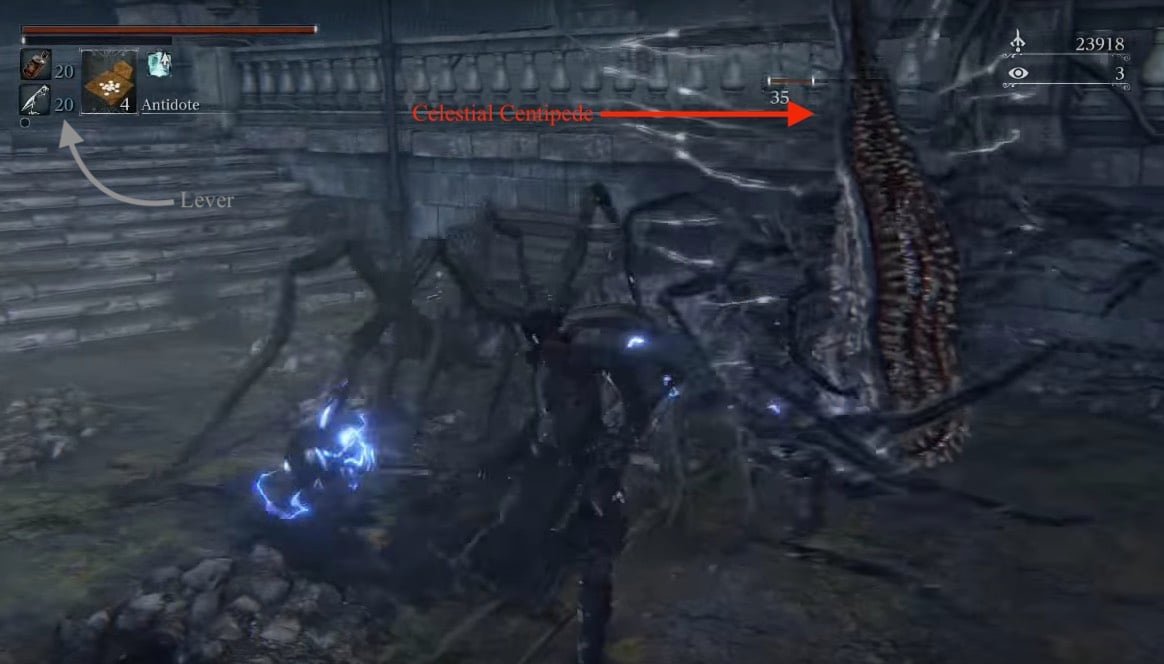 Inside you'll be on the ground floor of what appears to be some sort of lab. To your left will be a chest with a Pearl Slug. Directly ahead is the backside of a curving staircase that leads to the second floor. When you go around to the front of that staircase you will aggro an NPC hunter, Yurie, who's hiding at the top right of the stairs. A few things to note about our new friend: 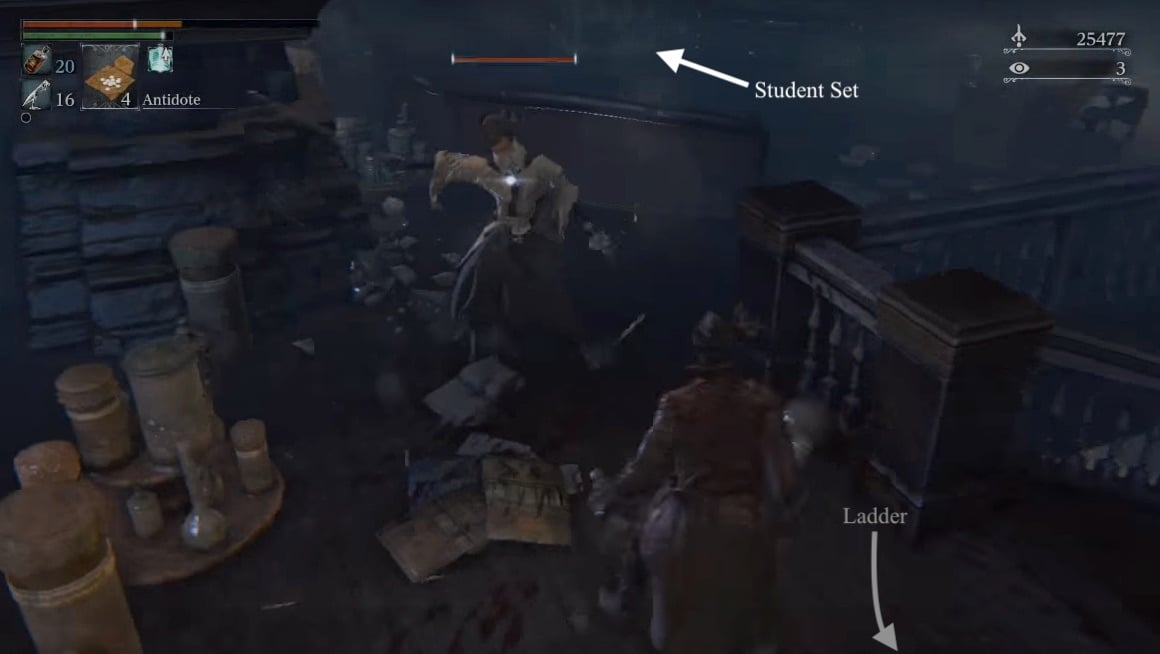 Once the hunter is dead, you'll be granted 3x Blue Elixir, and you can open the (fairly useless) shortcut door on the other side of the room and safely head up the stairwell to the second floor. Straight ahead in the little sitting area is another chest with the Student Set in it. Heading back past the stair and around there is a door to the right that is currently locked (this is the door that leads to the boss fight) and then further on there is a note to read on a bookshelf. All the way around is a ladder leading up to the third floor that you should climb now.

The loot on the table immediately in front of you as you climb off the ladder is the Lunarium Key, which unlocks the boss door on the floor below that you just passed. But before continuing on to fight the boss, head up another flight of curved stairs to a little landing. This landing will probably be empty now, but it is where the Chime Maiden who rings the sinister bell will spawn when playing co-op/PvP.

Head up yet another curved stairwell to the very top floor and watch out for a Zombie ambush from behind you. Open the chest up here to receive an Empty Phantasm Shell and then head back downstairs to the second floor. Open the locked door and head out onto the balcony to meet Master Willem and engage in deeply profound conversation with him. Talking to him nets you 2 Insight and killing him (no real reason not to) grants you the Eye. 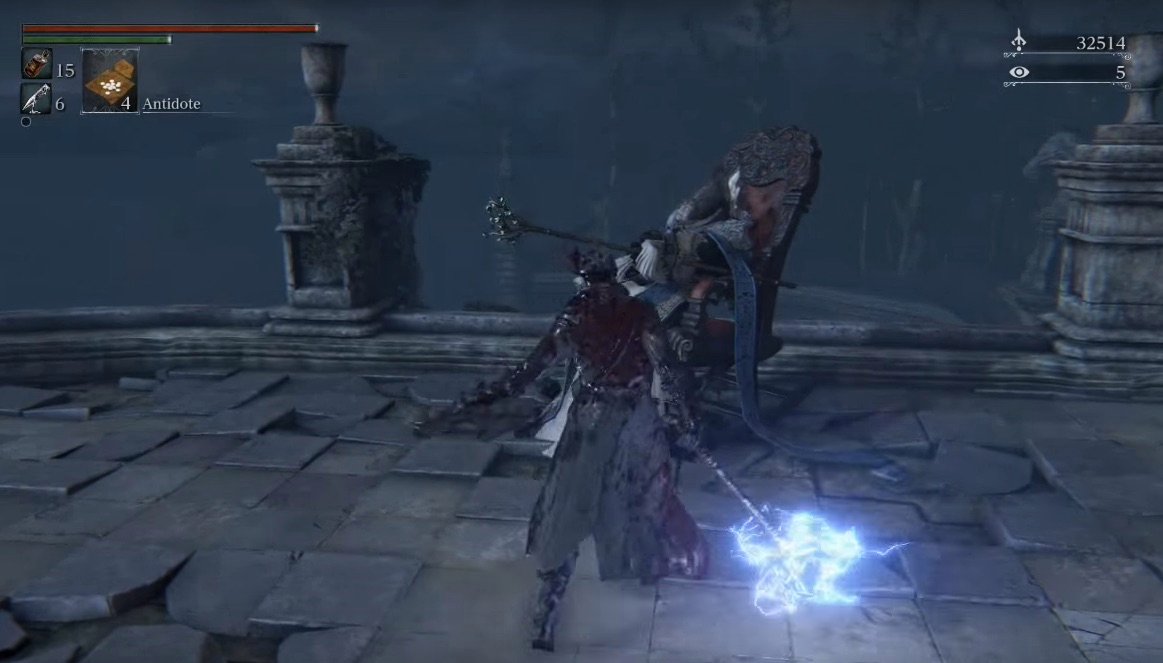 After you're done chatting/murdering, head to the far end of the balcony and hop off into the lake. 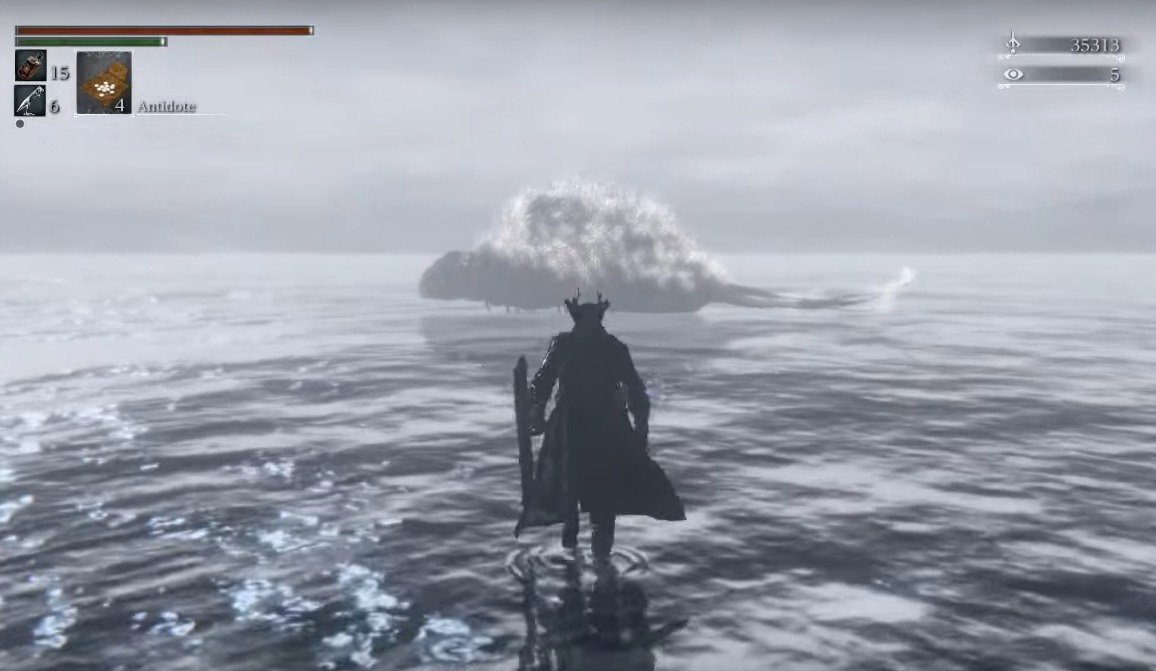 Note: If you have the League of Confederates patch and have acquired the Old Hunter Bell, then there is a summonable old Hunter called Mensis Scholar Damian. His summon location is right next to balcony door. He is very similar to Micolash in terms of fighting, except he primarily uses the Blacksky Eye and will heal you with a Choir Bell if you are low on health. If you have the Impurity rune equipped, the Younger Madaras Twin can be summoned near the lantern and Old Hunter Henryk can be summoned on the second floor of the building near the chest.