Hemwick Charnel Lane is a location in Bloodborne. Accessed from Cathedral Ward (Grand Cathedral Lamp), follow the right path exiting the cathedral and go through a tunnel that lands you at a graveyard with many Rifle Huntsmen and Hunting Dogs. You may travel to Cainhurst Castle from here. 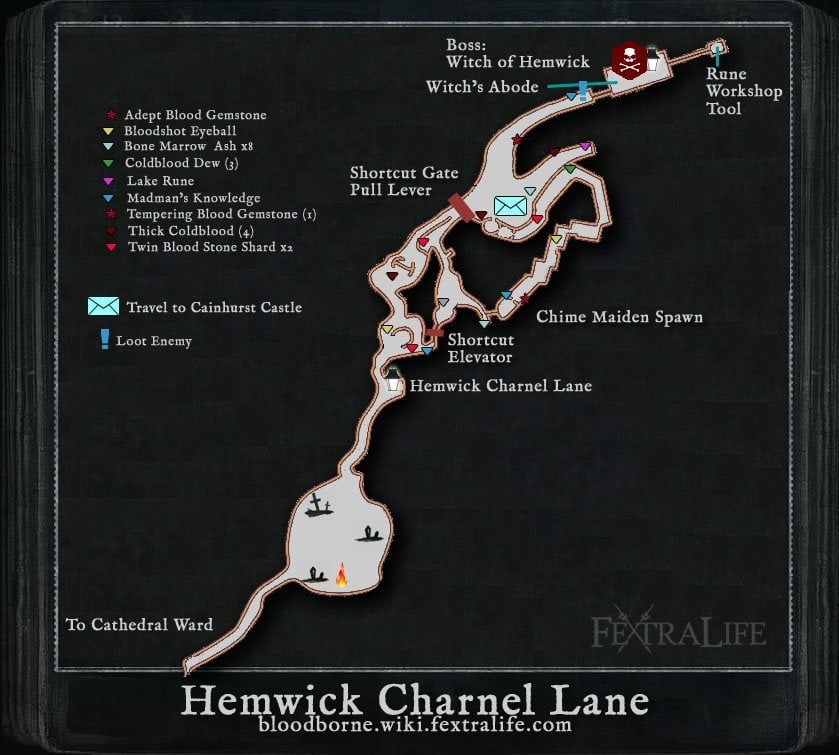 From the area with the Dogs you can find 9x Bone Marrow Ash, 2 Coldblood Dew, and a Twin Blood Stone Shards. Follow a straight path to find big wooden doors that open into Hemwick Charnel and find the lamp, defeating the second wave of Dogs and Rifle Huntsmen as you do. From the Lantern, walk down the stairs towards the Graveyard Hags with polearms and knives, being mindful of their range. Once killed, a cart on the left has a Bloodshot Eyeball. Facing the guillotine cart, go right and find 2x Twin Blood Stone Shard and notice the steps going up the dilapidated house. A lamp signals an NPC who just screams when you interact with them, and nearby you can pick up a Madman's Knowledge and see the elevator shortcut contraption on the immediate left, inoperable at this time. 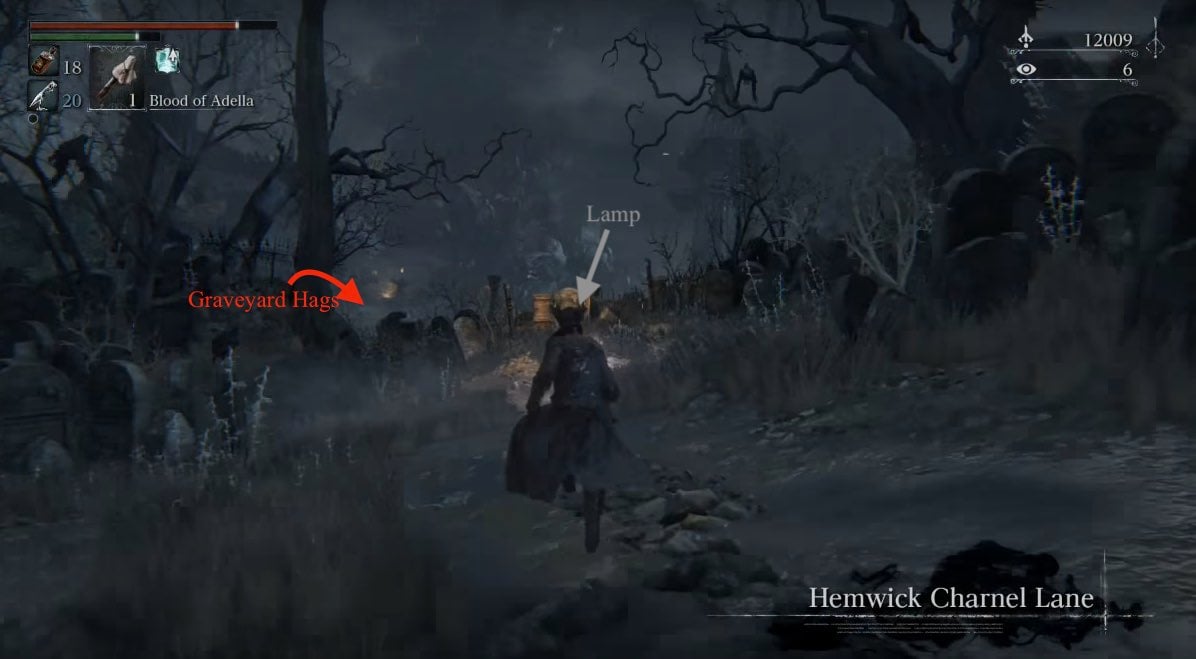 Return towards the cart and go up the stairs next to it, being mindful of the Hag that will rush down. Ahead, an open area will reveal another Hag and a Dog, and on the ledge sits a third Hag, throwing Molotov Cocktails at you. Make use of the middle blockade to avoid the flammables while you deal with the imminent threat. A corpse resting on the tree in the middle of this area holds Thick Coldblood (4).

Up the stairs, deal with the Molotov Hag and her melee companion, then continue up the second set of stairs to find a Brick Troll. After the troll is defeated, note the closed shortcut gate location straight ahead, and then turn around follow the narrow path rimming the hill to your left to pick up 2x Twin Blood Stone Shard on a corpse. Further up towards the gate, another Molotov Hag will begin attacking, however within a comfortable distance. Now that that's taken care of, you may notice you're unable to access the gate, make a note of its location and continue up the slope where the most recent fiery enemy was. Turn left into the stairs and be mindful of the obvious ambush from your left -you can turn the ambusher into the ambushee by walking on the ledge on the left, instead of going down the stairs and dive attacking her. Once you've dealt with this, you will arrive at a small open area with crows. 4x Pebble can be found on the corpse here, and you can access the Elevator shortcut. 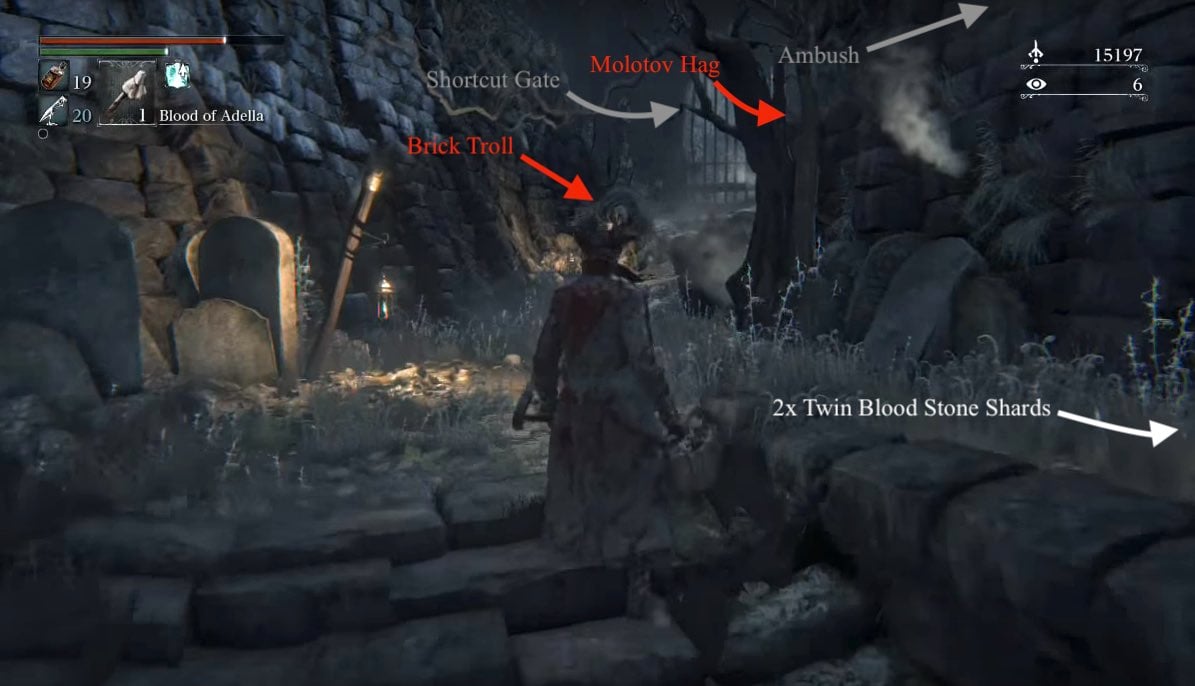 After activating the lift, a follow the narrow edge on the right until it leads you towards a makeshift wooden bridge. Here a Hag wielding flaming pike will try to ambush you, be warned that it is fully capable of pushing you off the ledge. Behind her, find 8x Bone Marrow Ash.

Across the narrow bridge, a Brick Troll and another pesky Molotov Hag await. Once defeated, go into the barn and take the fight to the Hag waiting on the right, then the Dog emerging through the second door deeper in the barn. Press on up the few steps, climb the ladder, and immediately launch forward to attack the Wandering Madness that is barely visible. Pick up the Bloodshot Eyeball since you're already here, then turn around and head down the few steps. You'll find wooden rafters in front of you, in a controlled manner, run straight through -there is no need to make any turns- and once you land on the other side, enter the doorway and immediately attack the Wheelchair Huntsman in the right corner. You can also find a Madman's Knowledge -the Bell Chime Maiden will spawn exactly where this item sits if you attempt a co-op game- and an Adept Blood Gemstone in this area. 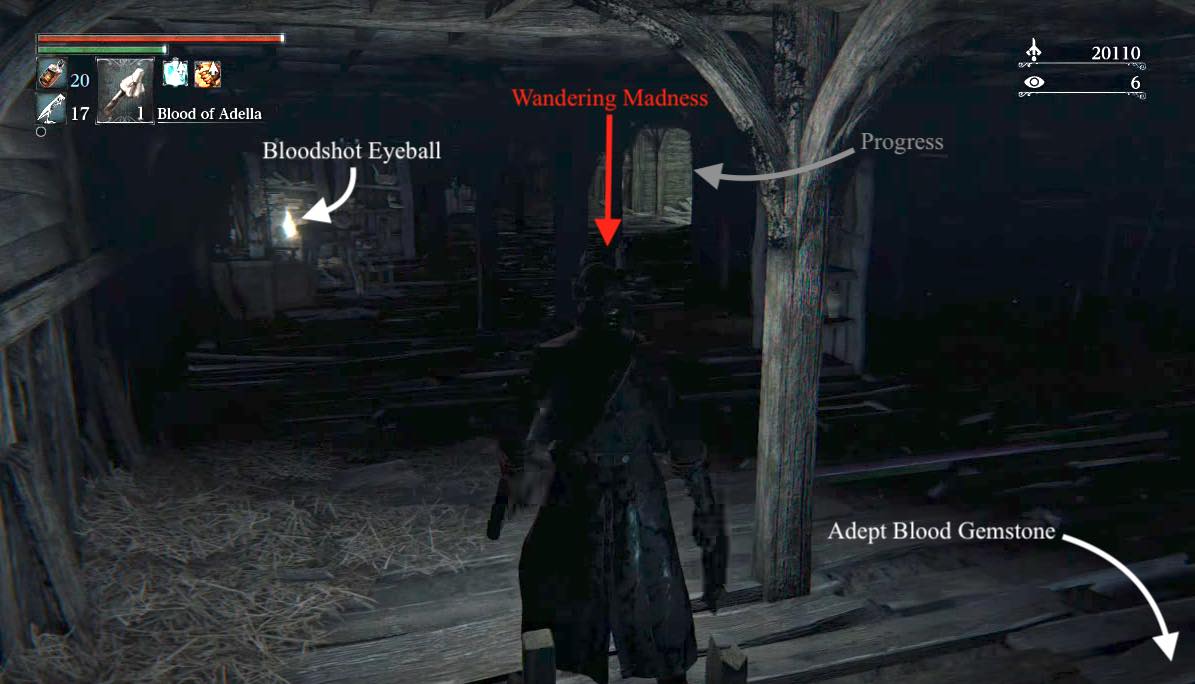 Go back to where you picked up the Bloodshot Eyeball, then head towards the outside floors. Go around the left and roll into the first Hag you see to ensure she doesn't knock you off, then take care of the second before you claim a Coldblood Dew from the corpse in the headstones near the cliff. Continue onwards and beware of the Brick Troll, Hunting Dogs, Graveyard Hags, and the Molotov Hag ahead. Clever use of Molotovs may save your life. Once they are dealt with, you can pick up 2x Twin Blood Stone Shards before going into the broken circular building and downstairs towards the last bit of the level.

Outside, two Executioners await you. You can sneak past them to start with or go mano-a-mano. When you've decided what to do, go left to pick up Thick Coldblood and open the Shortcut Gate -this is the gate from earlier which being open, gives you straight access to cut through a large portion of enemies. While you may have just gained an incredible access, there is still a danger ahead; a group of five Hunting Dogs and a Graveyard Hag ahead, and can be challenging to evade. Deal with the doggos first. It's worth expending a couple Pungent Blood Cocktails to get them all together, making it easy for you to hit them all at once, take the Hag on after. Past them, find a Thick Coldblood, 8x Bone Marrow Ash and most importantly, on the edge of the map right before the cliff, the Lake rune. You may travel to Cainhurst Castle from here.

Wicked Witch of the Lane

Return to the fork before the shortcut and this time head up the ramp but before doing so, to your right is an Executioner guarding a chest hiding a Tempering Blood Gemstone. Be careful when engaging him as a group of three Graveyard Hags will come downhill and possibly spot you. One of which carries Molotovs. 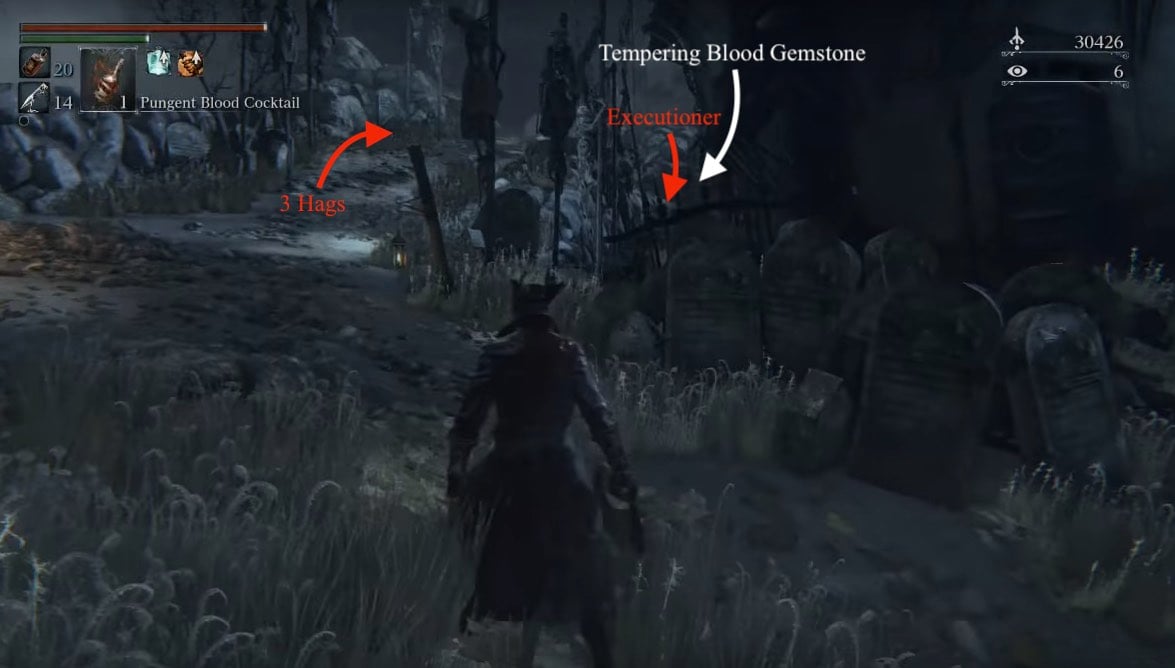 Once they have been defeated, continue towards the structure and hit a barrel once you enter to cause a Wandering Madness to drop from the ceiling to the left of the stairs going down. Defeat it to claim Twin Blood Stone Shard x2. Directly behind where the loot enemy just dropped, you will be able to see a Madman's Knowledge. Head down the stairs to meet this area's boss... 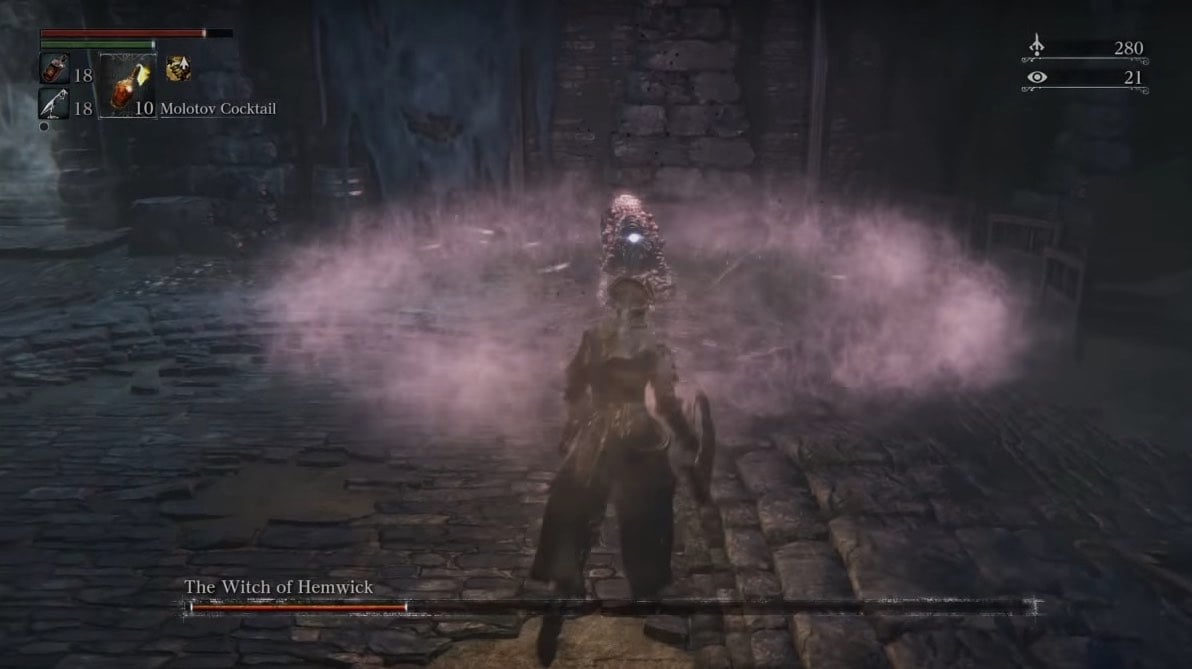