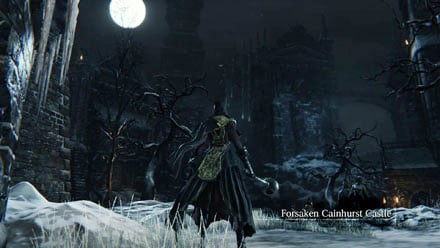 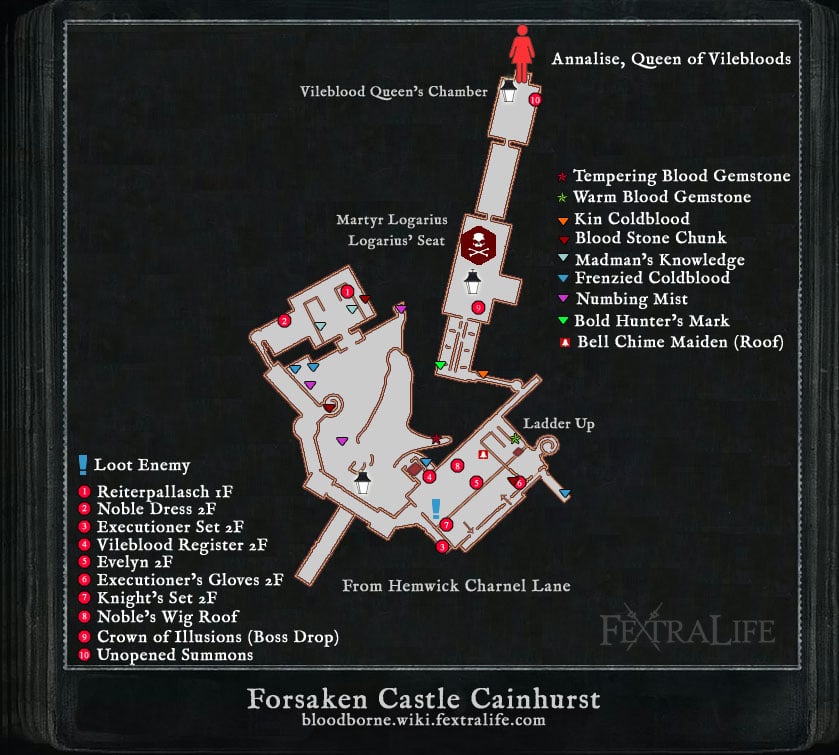 To access the Castle, warp to the Witch's Abode lamp and head back towards the large open area. You may want clear this area of Graveyard Hags, Executioners and Tainted Dogs entirely as if you die before heading to Cainhurst, you won't be able to summon the carriage again, however if you're confident in your ability to avoid death, make a beeline for the tall stone obelisk in the area holding the two executioners. This is because you'll need to use your Cainhurst Summons before approaching the area, and you are limited to 1. This will trigger a cutscene of a horse drawn carriage arriving. Once it ends, get in the carriage to trigger another cinematic to travel to Cainhurst Castle. 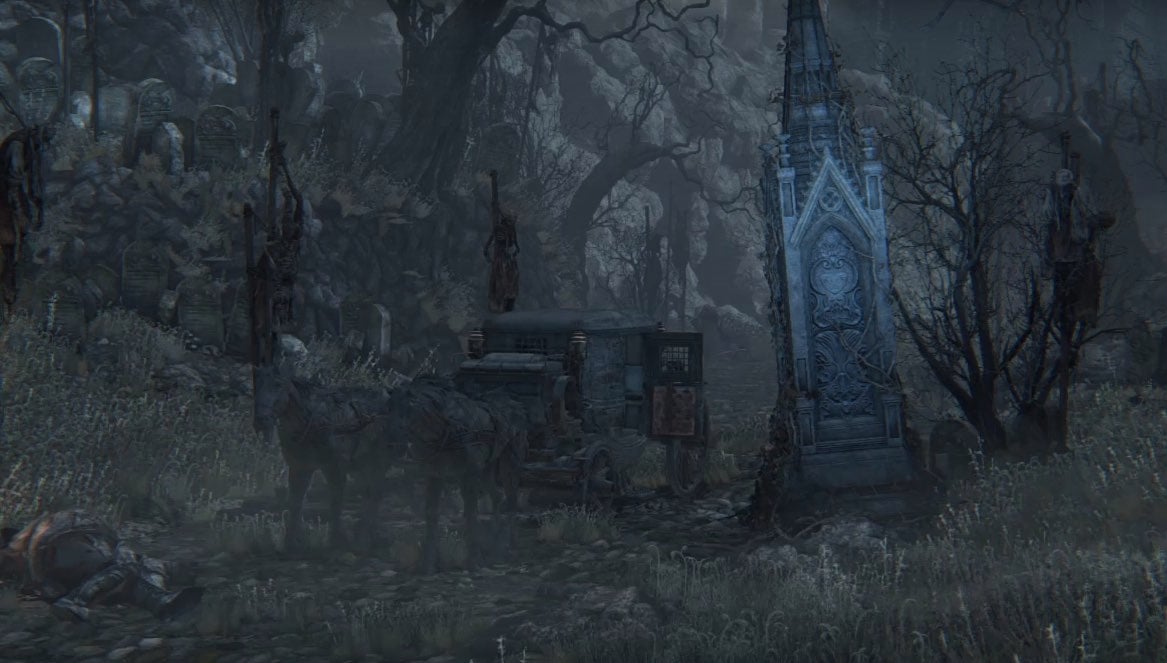 Upon arrival, you'll find yourself on a bridge over a moat, with the castle directly in front of you. Your only option is to head forward. As you do, the massive portcullis will raise and you'll find the first area lamp. Light it and now you can die in peace.

We're heading forward to the right, straight through both doorways, turn right to walk along the side of the mountain to pick up a Frenzied Coldblood(9) then drop down the rocks nearby, into a pit of Hateful Maggots to pick up a Tempering Blood Gemstone(3). You want to ensure you aren't swarmed by them so collect the item and run out of there, once you're in a bit more space, feel free to take them on or continue with your journey.

You'll want ignore the structure we just dropped from for the time being, and head towards the left towards the large gold doors into the castle proper. As you get closer, you'll encounter three pairs of Bloodsucking Beasts. Fighting these two at a time is very difficult as they're very fast, have an incredible reach and can do a pounce attack that can stun lock you. Divide and conquer plus the use of bolt damage, for the most effective results. Don't forget to pick up the 2x Numbing Mist on the way, as well as the 4x Numbing Mist, Frenzied Coldblood(9), and Frenzied Coldblood(8) on the triangulated corpses to the left of the big gold doors. On the right of the doors, find another 4x Numbing Mist.

When you reach the large doors they'll open by themselves and you'll find yourself in the grand reception area of the castle. There are bodies with items littered around and you'll be able to hear the sound of a woman crying. If you want to, you can pick up the items, but this will cause mobs of Bound Widows to appear and be aggressive. They're not hard enemies to deal with, but in large groups you'll have issues. There's a Madman's Knowledge on the left, next to a pillar. On the far right corner of the room, find a chest containing the Reiterpallasch, and another Madman's Knowledge not too far off. Kneeling on the floor there should be an Indentured Chevalier. Kill him before he gets up, then head up the stairs and to the right only briefly to secure a Blood Stone Chunk before heading up the left stars. You'll find another Chevalier on the landing in a similar position to kill him quickly too. 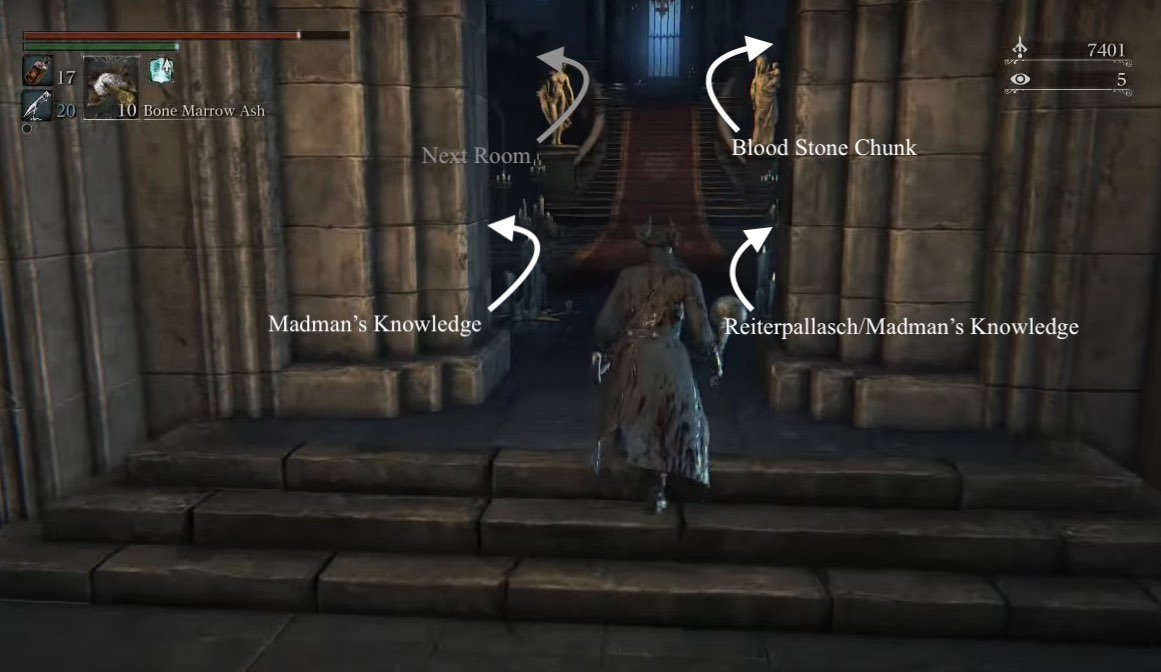 NOTE: An alternative to facing these enemies here, can be to just not, it is as easy to get swarmed as it is easy enough to run past most of them.

In the next room you'll encounter more Widows, but more importantly, you'll also find a corpse with 4x Quicksilver Bullets. You will probably have to fight these Widows dude to the spacing of this room so be prepared. Clear the room out and make sure to pick up the Noble Dress from the chest on the right side of the room. Head out, onto the balcony, and ascend the stairs onto the castle walls where you'll encounter your first Gargoyle on a round battlement. These enemies aren't very hard but have relatively high HP. Avoid getting grabbed by them, and a good combo should do the trick as they're easily stunlocked. Once the first one is dead, turn around and head up the steps onto a little tower. Kill the second one up here and pick up the Blood Stone Chunk. Carry on down the path across the walls and past another couple of Gargoyles until you reach the indoors once again. You'll find another Chevalier before you reach another exit. Once you're back outside, you'll only do so momentarily but before you proceed forward, take a right where there are a collection of statues and deal with the two Gargoyles at the end of the path so you can pick up the Executioner Set then back track and proceed into the library.

The first thing you want to do in the Library is sprint past any enemies and head to the left into a small room. This is the shortcut back down to the first lamp so you want to trigger this. Return back up and prepare yourself for another big fight. There are several groups of Bound Widows in this area, but most importantly you want to kill the Indentured Chevalier at the far end of the room. He has a blow dart which causes all of the Widows in the area to become twice as aggressive if he hits you -which can be identified by the red mark on your back. Once you've killed the him and cleared out all of the Widows, head back to the shortcut lift and open the chest next to it to get the Vileblood Register. There's another chest closer to the stairs that contains the Evelyn. As you approach the stairs, it will be against the right-hand wall behind some tables. Carry on with the level by heading up the stairs. 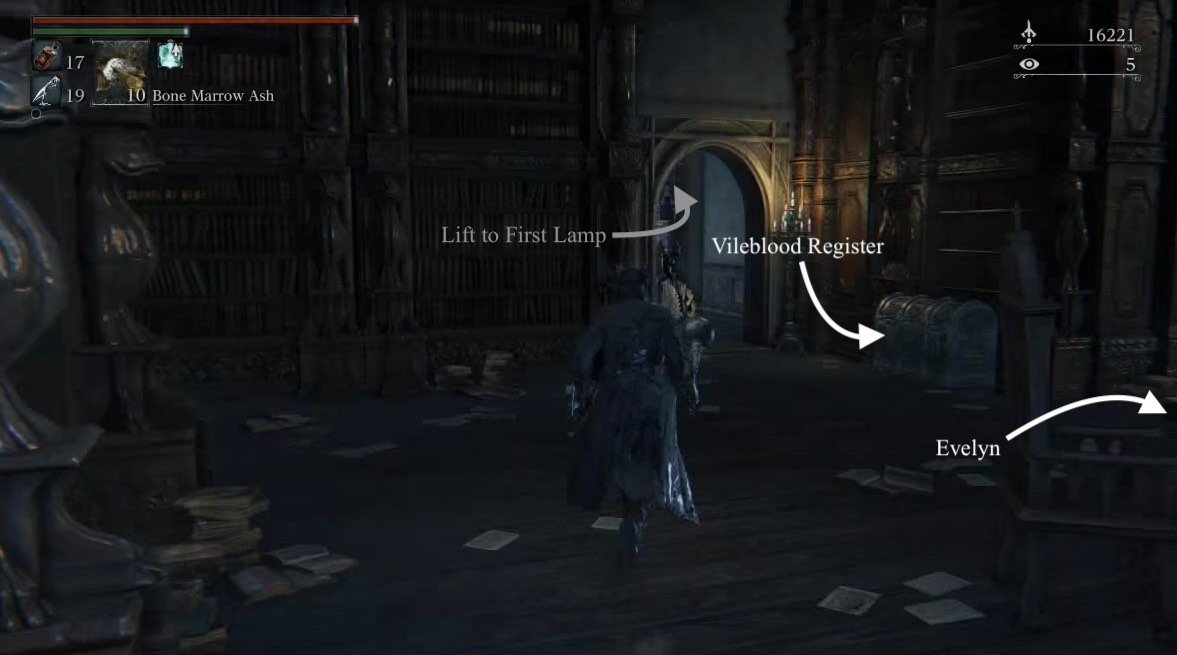 Up the stairs you have several Chevaliers to deal with. Some appear in pairs but mostly you should be able to clear this area out with relative ease. There's lots of loot in this area so be sure to clear out the enemies and head to the left corner -across the small bridge- of the room to pick up a Blood Stone Shard. Once you're done in the room, look over to the window on the far right and you'll find one with pane of glass missing. Head through it and you'll be be on a small statue. Carefully drop down to the next ledge, picking up the 6x Quicksilver Bullets off the body, then drop down to the bottom where Gargoyles will greet you.

Head through the door back into the library and you'll be met by several mobs of slightly more aggressive Bound Widows, including several that don't hold daggers, but instead hold their own heads and scream at you. The scream can stunlock you, so be sure to kill them first as getting stun locked leaves you very vulnerable. There is also a Chevalier hiding to the right of the entrance to the room, so prioritize killing him before the Widows as he will also use blow darts to aggro them. In this room there are two chests, one of which contains one of the strongest arcane spells in the game, Executioner's Gloves, while the other contains the Knight's Set. Once you've cleared the room out, you're done in here so head back out of the door onto the balcony. 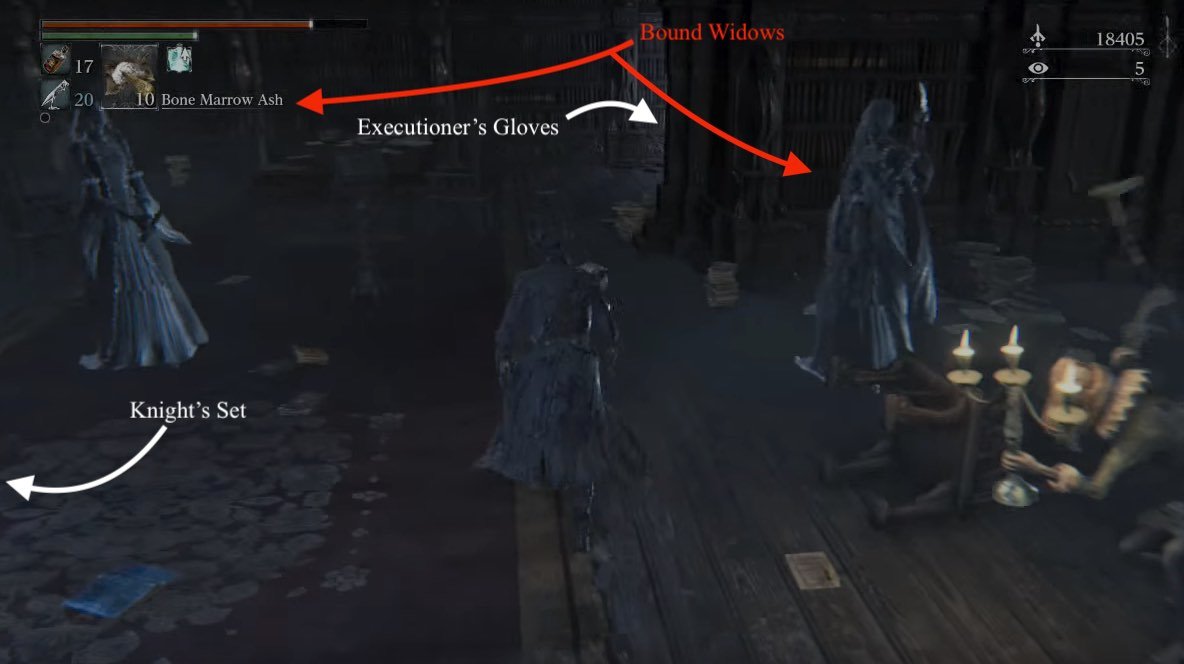 Head back out the same way you came into the room and proceed left to find a gap in the wall with a ledge. Carefully head down the ledge and onto the small roof where you can find a Kin Coldblood(10), but beware the Gargoyle perched against the wall above the item. Head back onto the ledge and hop into the open window and you'll appear in a blocked off part of the Library. Pull the lever and you'll open up the ladder to the end of the level and create a convenient shortcut back to where you picked up the Evelyn. Climb the ladder and explore the upper section. There are no enemies up here so enjoy the brief moment of peace. Straight to your left, you'll find yet another chest, this time holding a Warm Blood Gemstone(3). If you head round the side of the room you'll find a Wandering Madness who holds 2x Blood Stone Chunk so do your best to catch him.

Getting to the Martyr

Once you're ready to move on, head up the stairs out of this area to the roof. You'll spot an item guarded by a lone Gargoyle. When you engage it, two more will fly in so be fast and damage them as fast as possible. Pick up the Knight's Wig then head the only way you can... off the side of the roof. Don't worry, you can only come off one edge of the roof, so drop off the side and land a few feet down, then look to the circular turret roof; drop off it and onto the thin fenced walkway (NOTE: If you've missed something and would like to go and claim it, you can do so by dropping onto the stairs on the right, but as soon as you drop off the roof, onto this walkway, there is no returning to Cainhurst.). Head a long here until you find a gap in the fence, drop out here onto another circular roof. Carefully walk around the edge until you get to a bridge you can drop down to. Pick up the Kin Coldblood from the body then climb the ladder. On the next roof, if you head over to the far side and pick up the Bold Hunter's Mark. Head up the roof and through the archway to take on the boss of Cainhurst Castle. 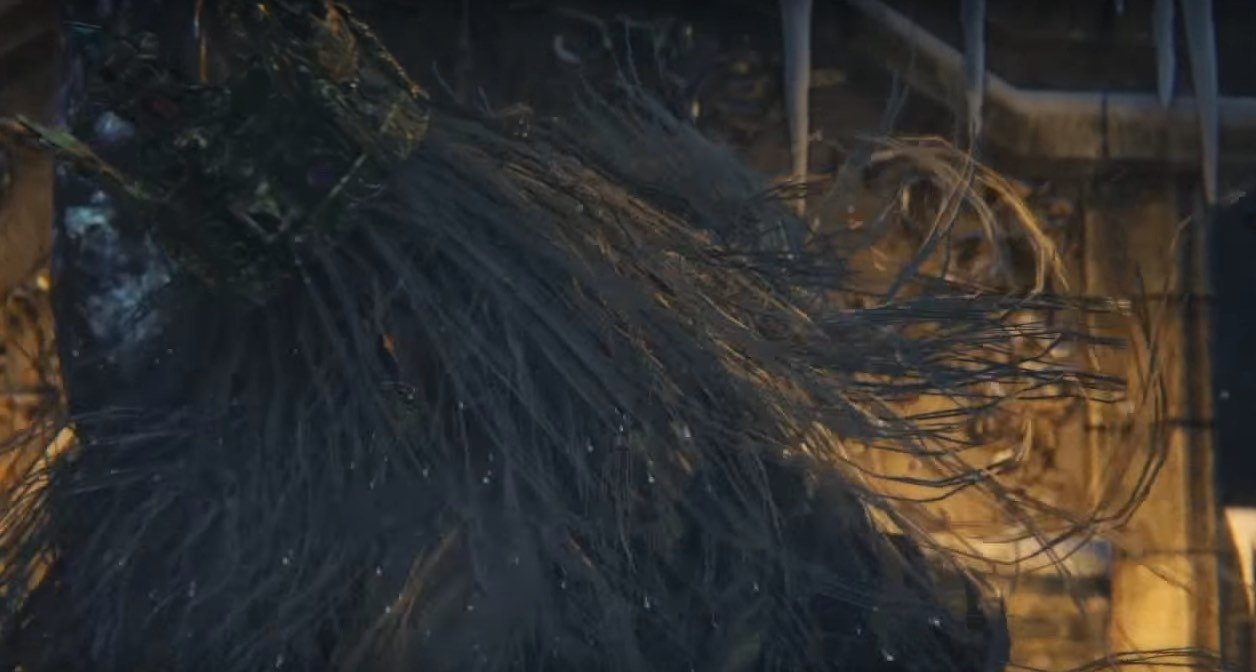 Calm After the Storm

Once you have defeated Logarius, pick up the Crown Of Illusions he drops and put it on. Head towards where his throne stood and a cutscene will trigger, causing a previously hidden chamber to appear. Go in the building and up the stairs into Annalise, Queen of the Vilebloods' chamber. She will talk to you as soon as you enter the room, telling you to kneel before her. Walk forwards to just before her and look to the right, here is the Unopened Summons which you need to give to Alfred to finish his storyline (though if you want to join the Cainhurst Vilebloods don't give the summons to Alfred as he will kill Annalise [though if he does, you can take part of her remains to the upper cathedral to have her resurrected. In the event you resurrect her, she will return here automatically]).

Kneel before the queen and decide if you want to join the covenant or not. Once you're done, turn around and there'll be another Lamp, allowing you to return to the Hunter's Dream.