Old Yharnam is a location in Bloodborne. Use the lever on the balcony to access the path found under the large tomb in the Cathedral Ward. 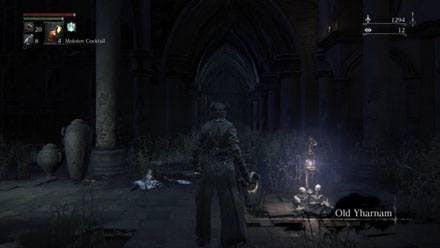 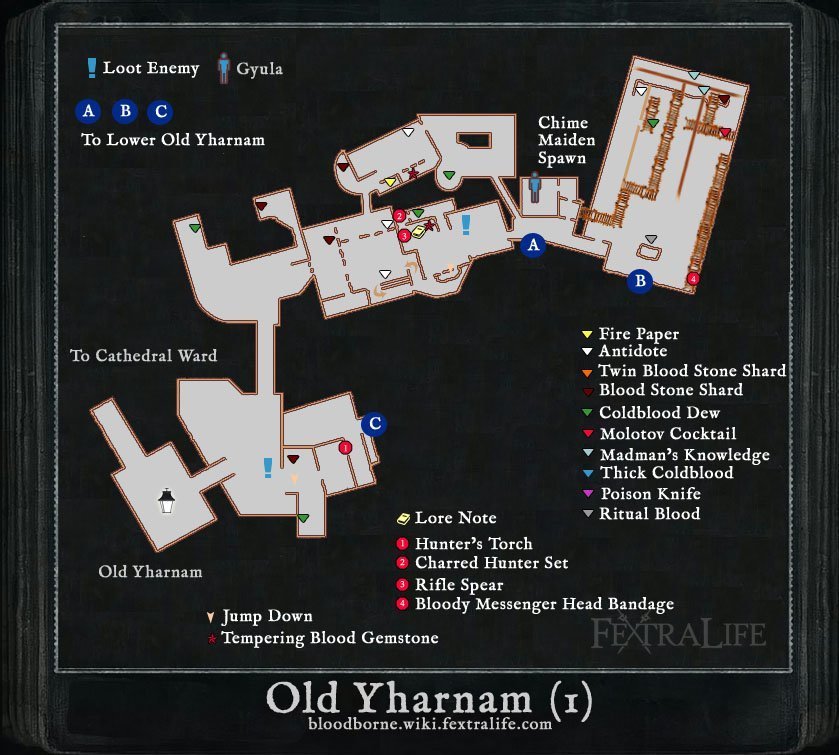 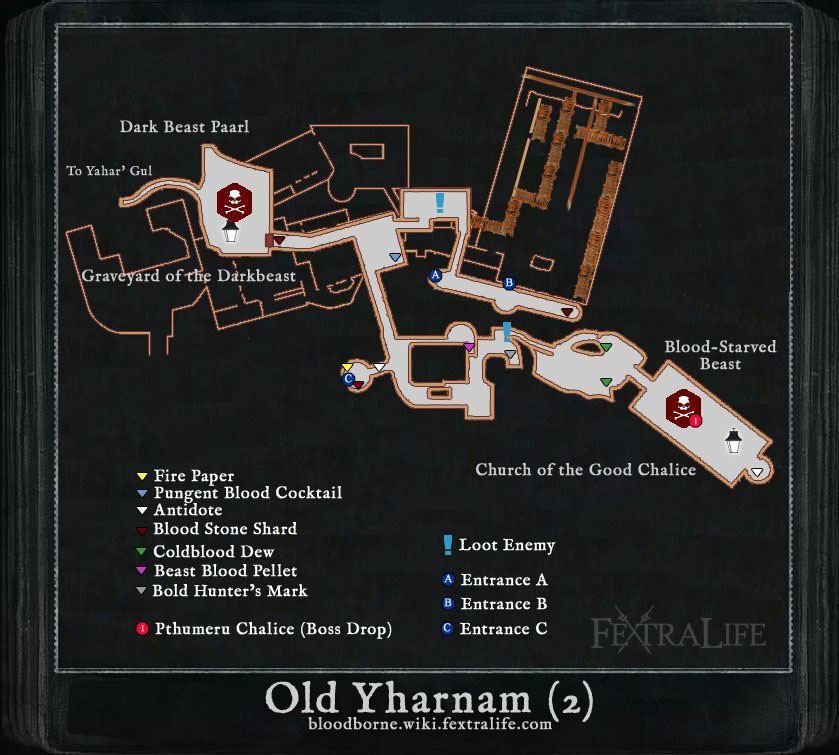 Enter the tomb you have just been granted access to via the lever in Cathedral Ward. At the bottom of these stairs, you'll notice an item -Tempering Blood Gemstone (1)- straight ahead. Turning right and heading to the bottom of the stairs, you'll encounter another Scourge Beast similar to those you faced on the Great Bridge. Continue down the staircase behind it and drop down the ladder to find 4x Antidote up one flight of stairs, then head all the way down to find the first Lamp of Old Yharnam. On the right of the Lamp, you can find 3x Pungent Blood Cocktail behind some pots. When you're ready, proceed to open the giant black doors ahead of the Lamp. 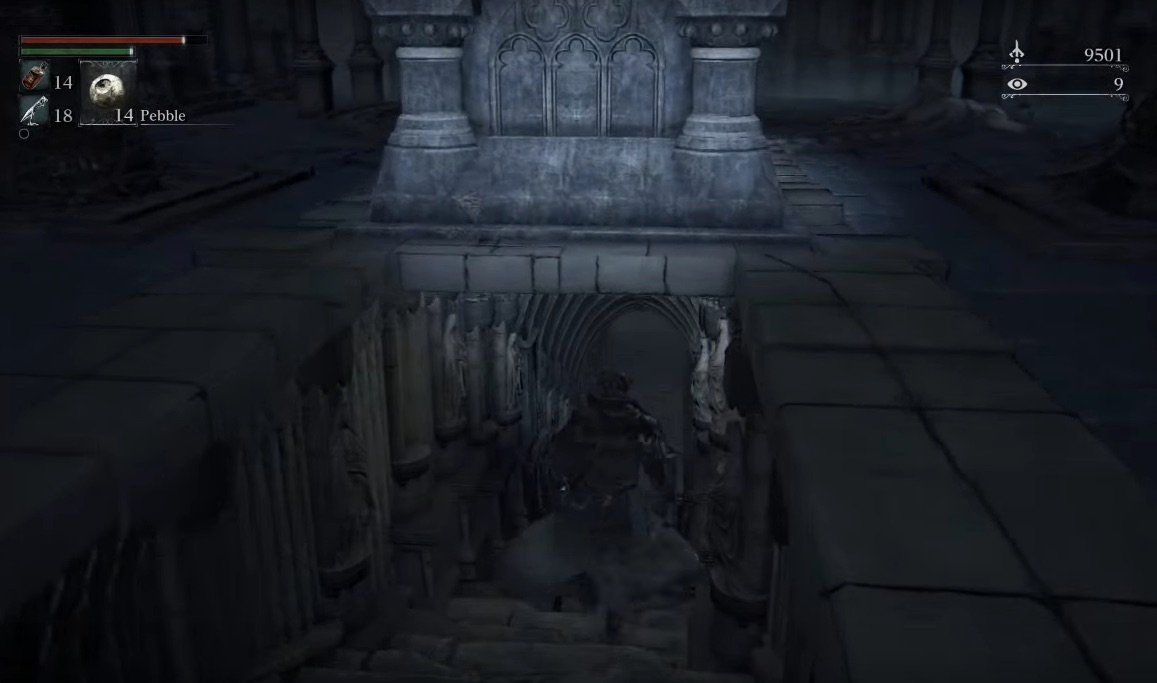 As soon as you open the doors, you'll find a Wandering Madness next to a bonfire that will drop down the platform in order to escape from you. Take care of it swiftly and collect your 2x Blood Stone Shards. Down here you can gather another Blood Stone Shard, and at the bottom, the Hunter's Torch. Be careful dropping down here as there is a trap with two Cloaked Beasts. They're not too strong in themselves, but they can inflict slow poison on you surprisingly quickly. One will be stood on its own in a courtyard, but engaging it will aggro the second one. Once they're dealt with, use the walkways and ladders to return to the top where you initially saw the Wandering Madness, picking up a Coldblood Dew(2) at the top of the ladder. 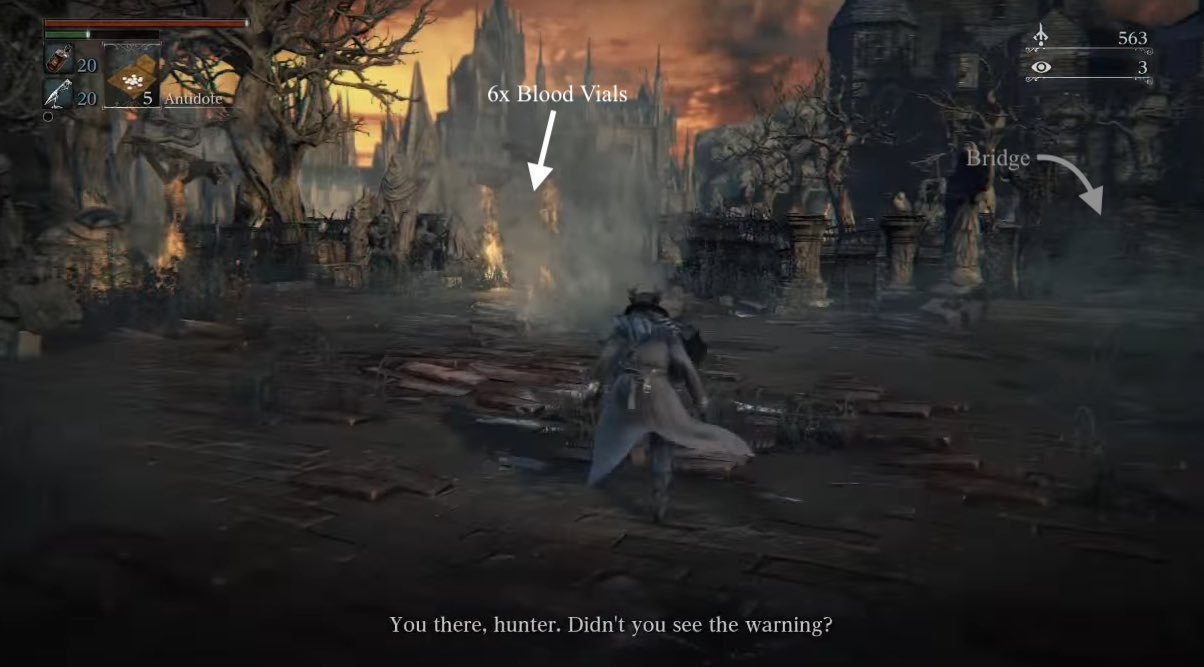 Facing the big black doors, head right, passing the bonfire. Upon doing so, Djura's voice will be heard, warning you to turn back -of course, this won't stop us. Pick up the 6x Blood Vials on the left then proceed to cross the bridge but be ready to face a Beast Patient. At the end of the bridge you'll arrive at an open courtyard with smoke emerging from piles of corpses, however will not have much time to admire the view as you'll be promptly attacked by another two Beasts, with a third sitting at the wall straight ahead. Grab a Coldblood Dew from the nearby corpse and head right to pick up another 2x Blood Stone Shard. Head back and this time go around the other side of the church building and you'll encounter another Cloaked Beast, kill him and pick up the Coldblood Dew near by. Head back round the the front of the church and proceed down the stairs.

This will prompt another warning and not long after, more enemies (3 Beast Patients, 2 Cloaked Beasts) will emerge to follow up on the threat. After a short time, the fire of a Gatling gun will get you so get behind cover. Head right at the stairs, and drop down to a balcony to avoid the gunfire. Here you will find a Blood Stone Shard, and once you enter the room, you'll find another 3x Antidote, and a Cloaked Beast. The downstairs exit will lead you to more gunfire and 2 aggressive Beast Patients. Lure them inside to defeat them safely, as the gunfire can create explosions with the Oil Urns laying on the area. Once they've been dealt with, exit and while sprint through, grabbing the 3x Antidote then the Blood Vial at the exit, and cross a narrow wooden bridge. 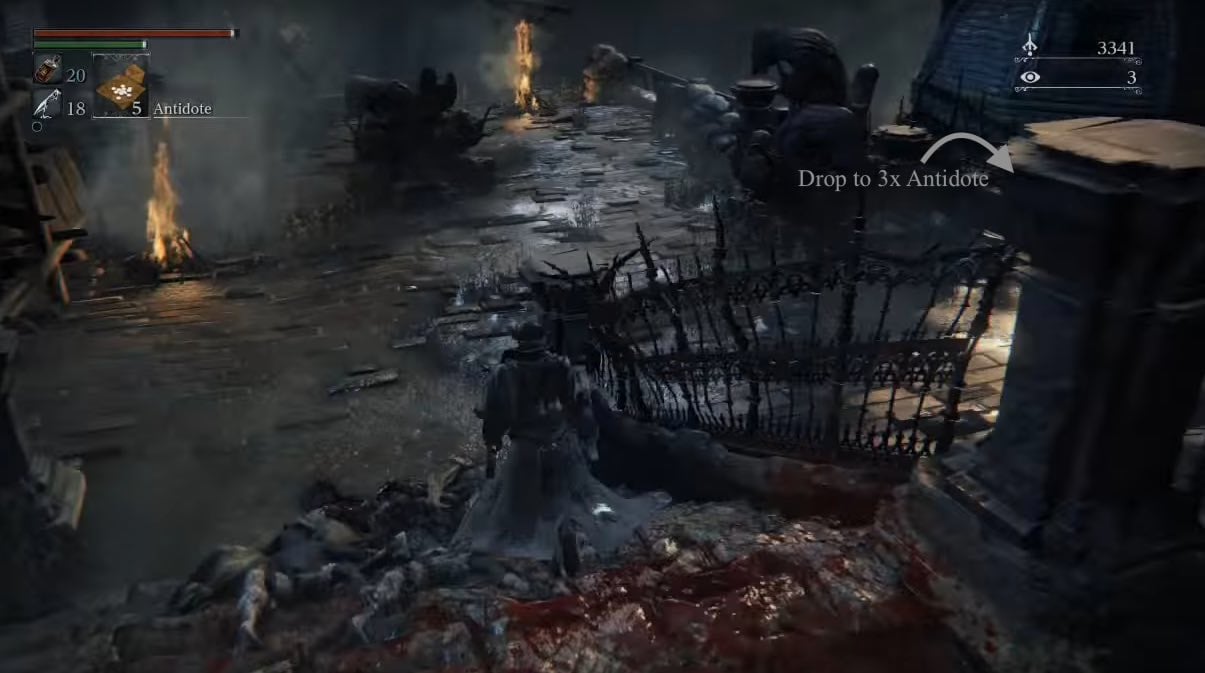 Here, a group of Carrion Crows devour a corpse that holds a Blood Stone Shard. Once you have dealt with them, rim around the right side of the entrance and find 2x Fire Paper before entering inside the building and defeating the three enemies inside (2 Beast Patients, 1 Cloaked Beast that jumps through a wall on the right). Check the room on the right to obtain Bloodtinge Gemstone, and then pick up an Antidote near the exit. 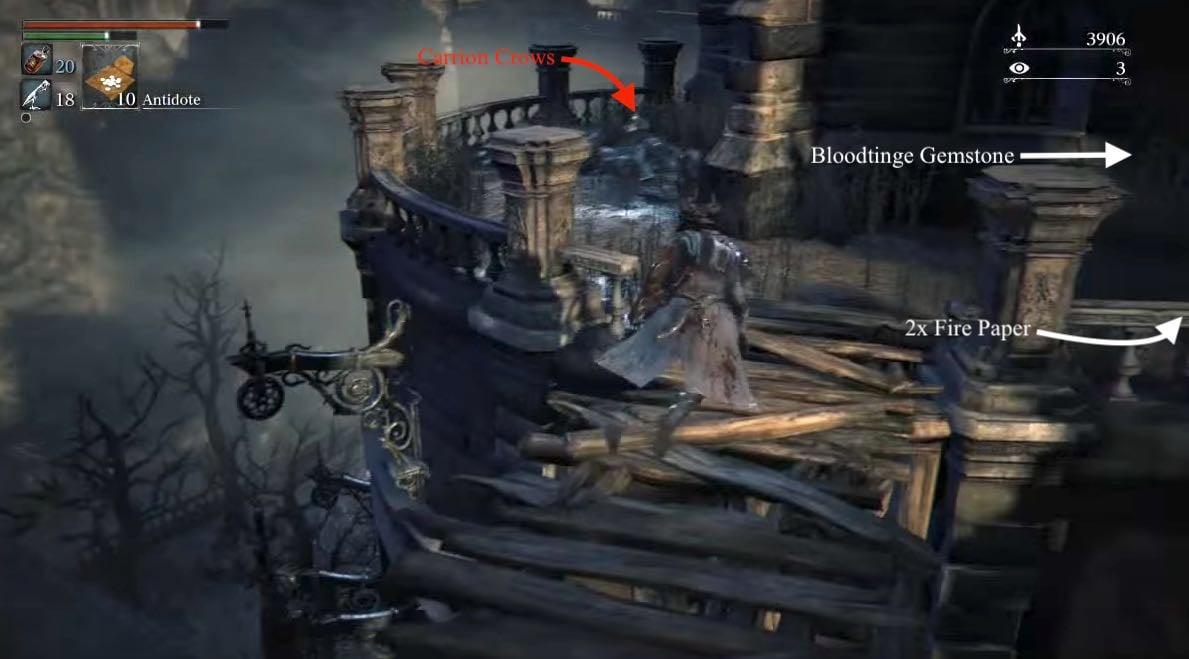 You will now exit to a courtyard where gunfire can reach you, and 3 Beast Patients are ready to ambush you. Lure them into the safety of the building to fight comfortably. Once defeated, you can go out on the courtyard to grab a Coldblood Dew and then dash along another narrow wooden bridge. You are now at Exit A, but you cannot activate it yet. To your right, you may return to a courtyard with a Hunter -he drops 6x Bone Marrow Ash. but in the range of the Gatling gun. To your left, stairs leading to Djura, the hunter who has been gunning at you. If you fight the hunter on the courtyard, make sure to stay behind the statues for protection, however it is advised to lure him to exit A and fight him there, as you are clear of the Djura's line of sight.

Note: It is advised you do not engage Djura at this time, and come back here later to engage him in dialogue.

From the top of the stairs next to exit A, run across the courtyard and hug the wall moving left, until you find an opening on to drop down (marked on the map). Drop to a ledge below and then further to the entrance of the lower floor. At the bottom you will enter a room filled with Beast Patients and Cloaked Beasts, a chest with a Tempering Blood Gemstone and 6x Blood Vials; defeat the enemies first. You can deal with them via AOE attacks or by parrying, as you gain invincibility frames when doing a visceral attack and it has a "push back" effect on nearby enemies. Once you have dealt with them, head up the stairs, grab the Rifle Spear off a corpse under a vase then grab the Charred Hunter Set at the top, along with a Coldblood Dew right outside. Beware of more enemies rushing you as you exit!. 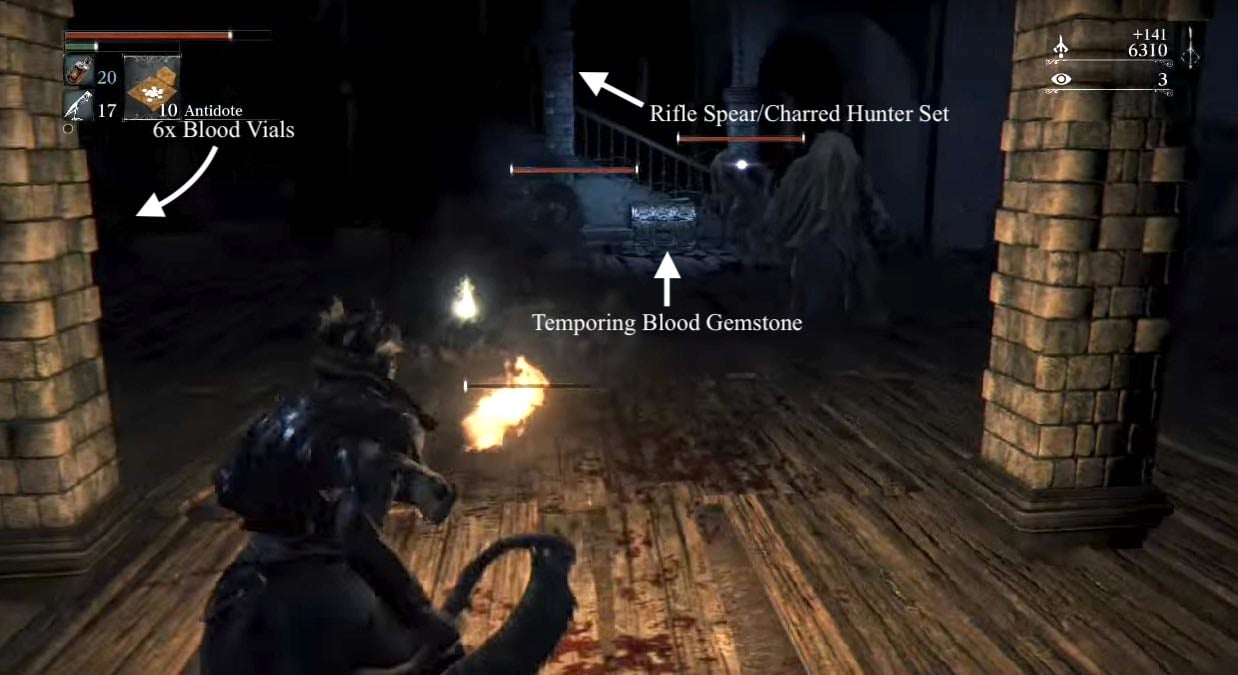 You can now take the stairs on the right to return to the courtyard area where you are free from Djura's fire (near exit A) , and have two choices to proceed: 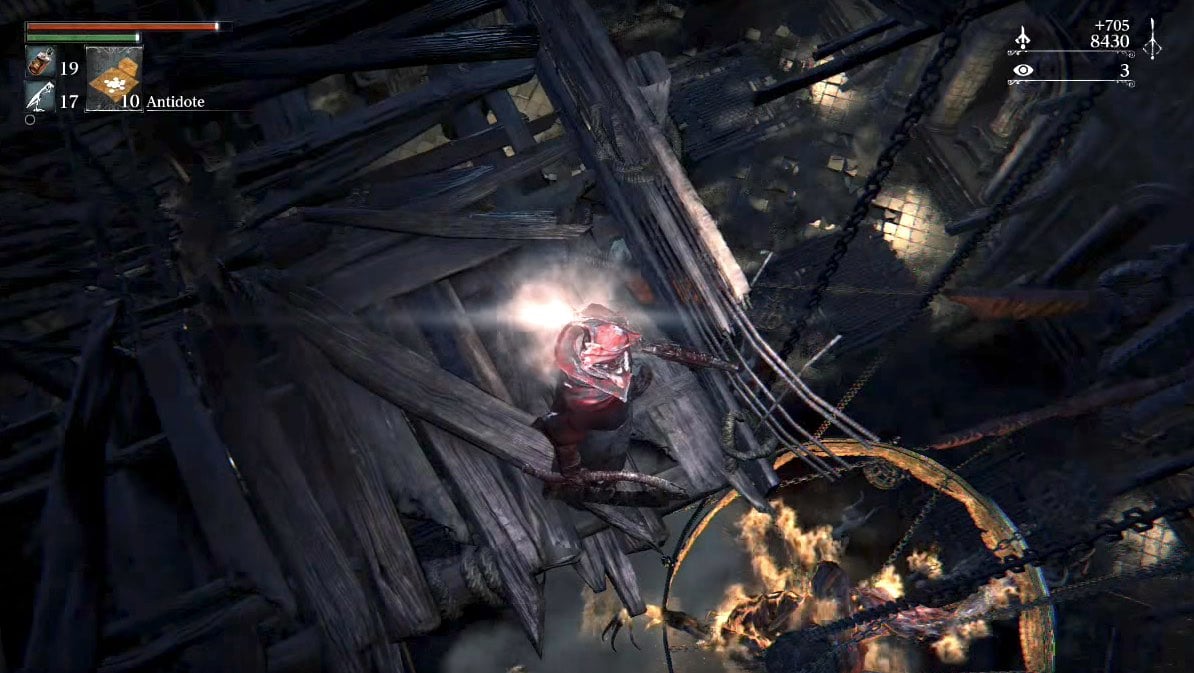 The bottom floor of the building has some hooded enemies that can be dealt with safely in the large environment, and hide away 1x Madman's Knowledge and 1x Ritual Blood on the altar. Exiting the building will place you at Entrance B.

From Entrance B, turn left and fight a group of Carrion Crows to claim the Blood Stone Shard they protect. Turn around and continue straight until you come across 6x Blood Vials and a doorway on your right, leading to a ladder. Climb it to unlock this shortcut leading upstairs to Djura.

Climb back down the ladder and turn into the corridor next to you. As soon as you enter the room, rush to kill the Wandering Madness in the far left side of the room, ignoring the three Beast Patients until you kill your target. Tip: Using the Hunter's Torch on the beasts will cause them to cower and retreat for a moment before pouncing once again, giving you a little bit of breathing room. Head down the short steps and look for a corner in this open area to collect 2x Pungent Blood Cocktail, but be careful as there are two Scourge Beasts patrolling around the left of this area. Best advice is to wait for them to split up and go after the right hand one first, then return and deal with the second one, unless you want to take on both together. Head to the right hand side of where you initially find the Beasts and continue down this dead-end corridor to find a door and 2x Blood Stone Shard - you will not be able to open this door towards Darkbeast Paarl yet. 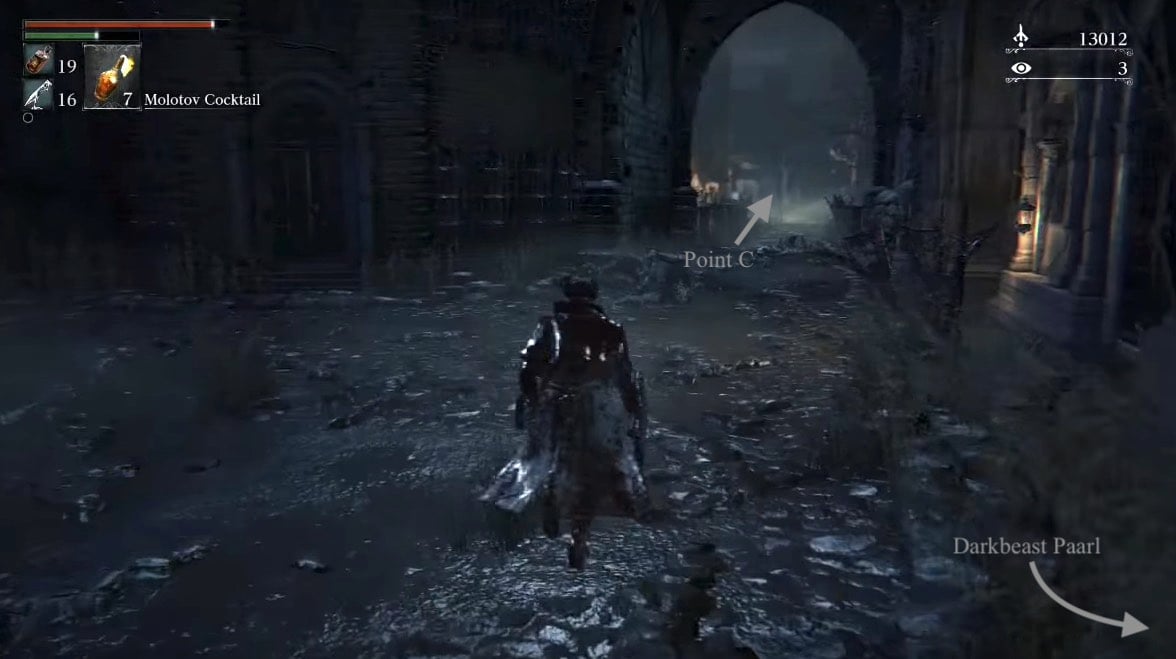 Returning towards the area where the Beasts were patrolling, continue down the street towards Point C, being mindful of enemies breaking through the house doors. When you cross the bridge, turn left into narrow corridor and find 6x Beast Blood Pellet at the end. Once you've picked the pellets up, a Beast will drop from the side of the building and try to ambush you. Back on the main street, another Beast will come through a door, that reveals the path to Shortcut C. Explore the stairs to find an Antidote, an ambushing 2 Beast Patients next to 2x Blood Stone Shard, and 2x Fire Paper at the top next to the shortcut opening.

Returning downstairs, follow the path until you hear a screeching sound. Ignore that for now and go to the right of the small building to take on another Scourge Beast. Like the other werewolves in this area, he can cause slow poisoning, so be careful. Go down the smoke filled alley on the left of the building and kill the Cloaked Beast. Right before the wooden ramp, you can collect 10x Quicksilver Bullets. There's another Wandering Madness, and 2x Bold Hunter Mark beyond the ramp, to your right.

Continuing on, a large open area where burning fires and Cloaked Beats await. Stick to the left side to defeat the first enemy that hides next to the tree and collect the Coldblood Dew. You can also check the opposite side of the map for more Coldblood Dew next to a large rock, but beware, there are three of these enemies lying in the long grass in ambush. You won't be able to lock on until you've triggered them but if you keep an eye out you'll be able to see them and use the opportunity to do a charged attack on them. 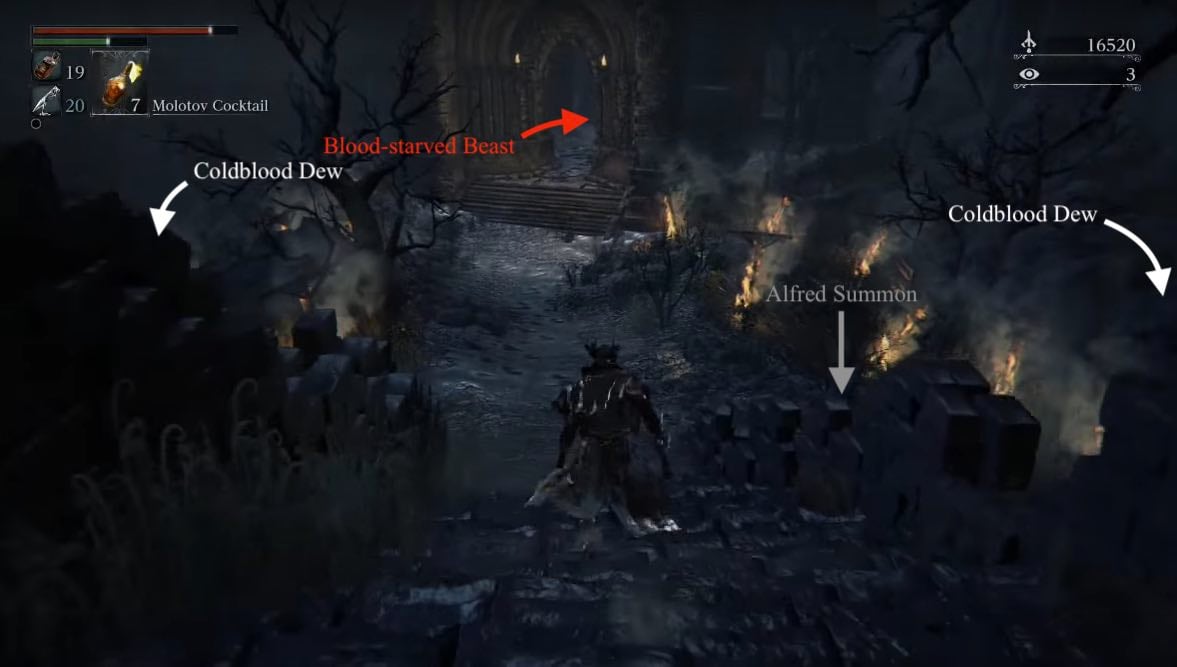 Proceeding forward will trigger the level's boss fight and unlock the next lamp. 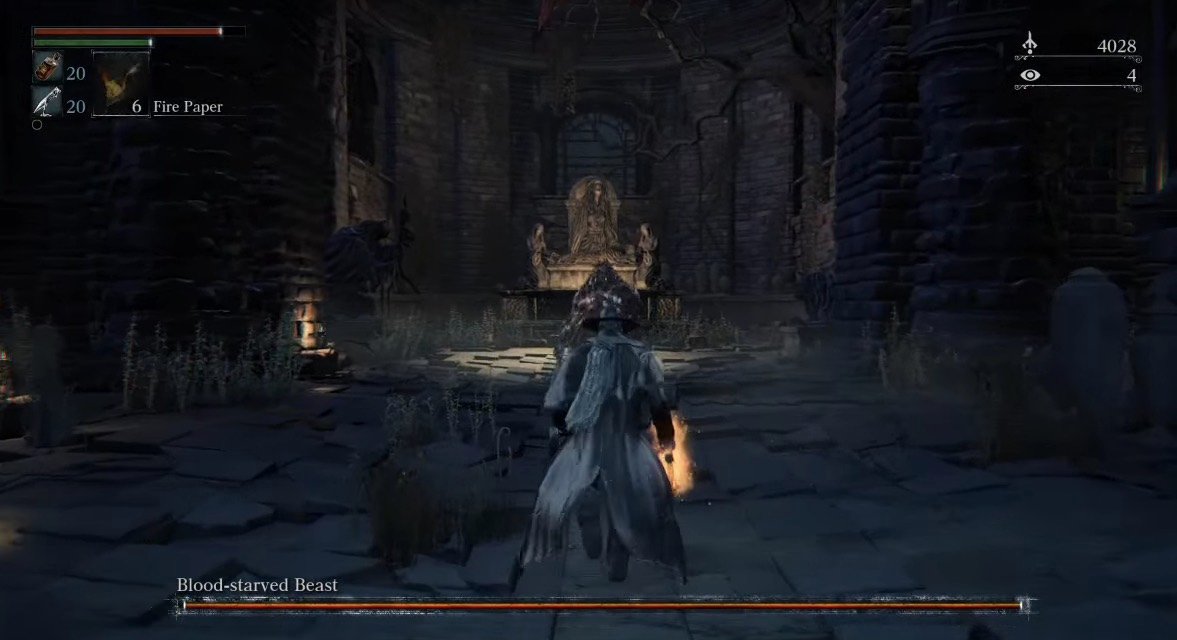 Should you struggle with the boss fight, next to the slope that bring you down to the area is a note; reading this note then ringing your Beckoning Bell will summon Alfred as an NPC summon (providing you agreed to cooperate with him when you met him in Cathedral Ward).