Hypogean Gaol is a location in Bloodborne, a subsection of Yahar'gul that can be accessed before the main quest takes the Hunter there. The Lamp to this location becomes unavailable after the player advances past Rom, the Vacuous Spider, and stays unavailable for the rest of the game. While not a 'true' area of the game as it is labelled as Yahar'gul, it is called the Hypogean Gaol to differentiate it from the later part of the area. 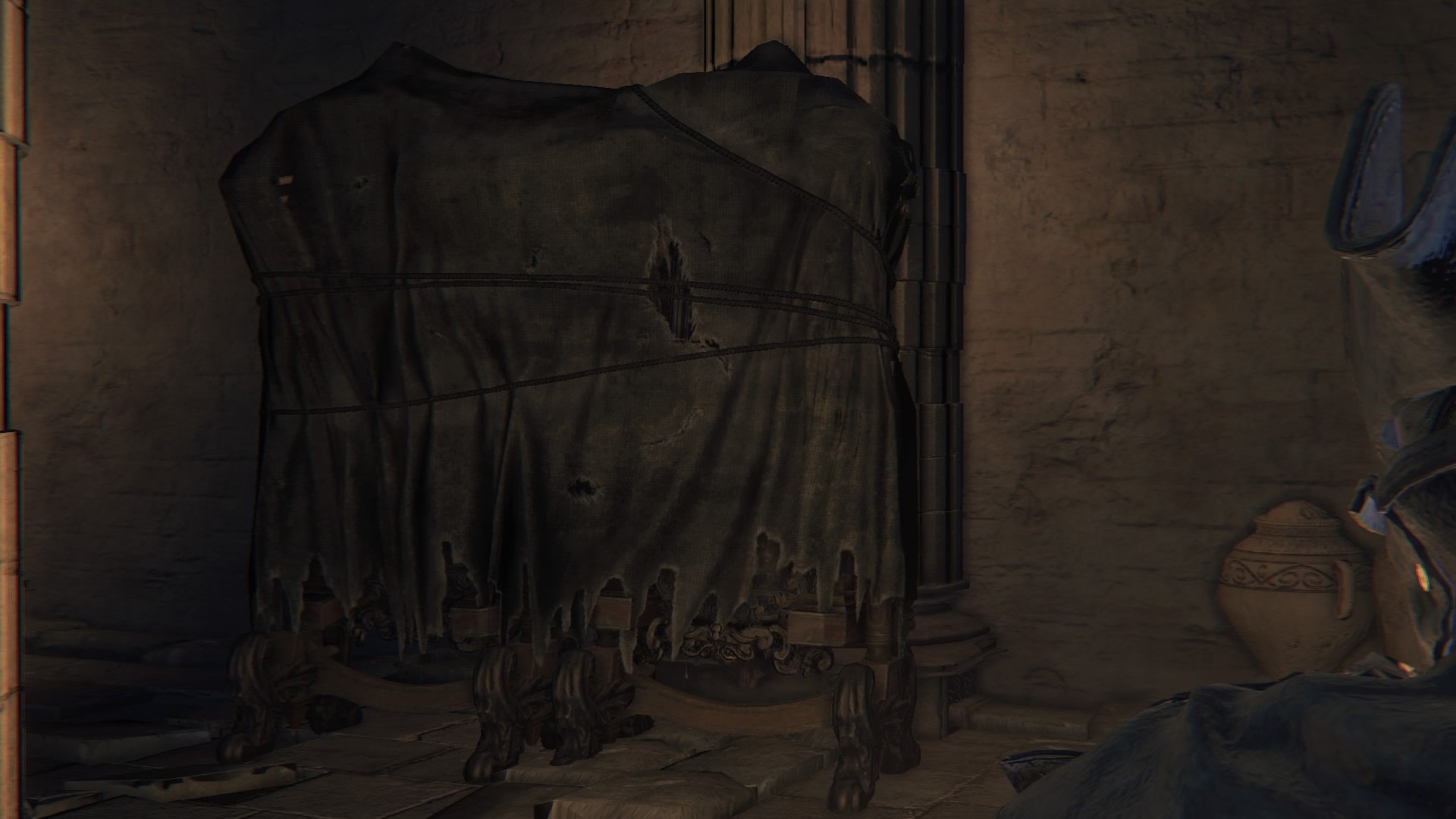 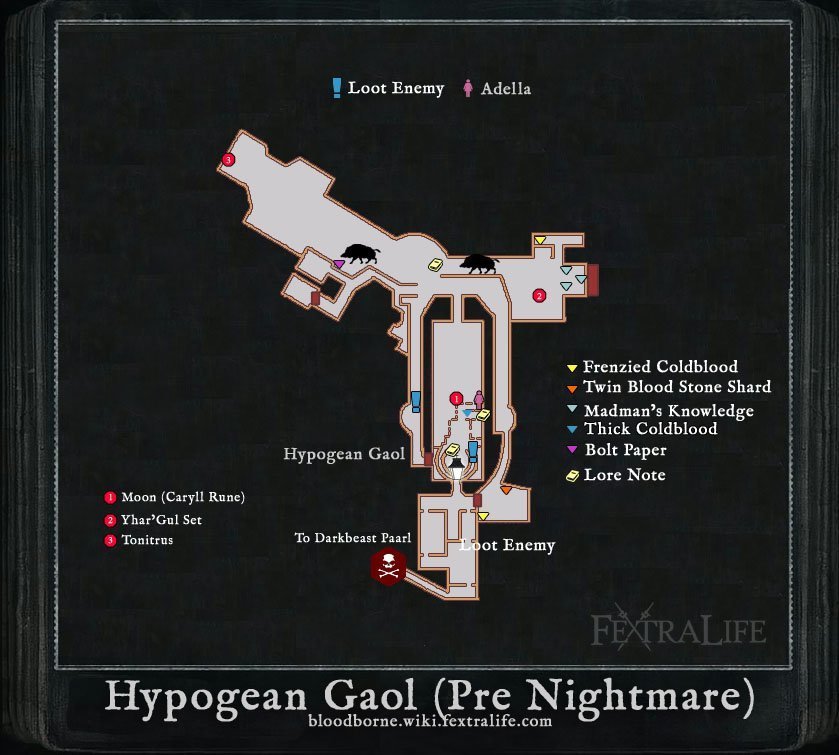 After defeating the Blood-Starved Beast, you'll be able to encounter a Snatcher; you must die by a Snatcher's hand to be thrown into his sack and trigger a small cut-scene ending with you standing alone in an unlocked cell. Exit your cell through the unlocked door and head right to find a staircase -you should find a corpse with Thick Coldblood(6) as you approach these stairs- leading to a dead end room containing the praying/hidden woman, this is Adella. While she is an interactive NPC, it only works if you seem as though you represent the church. Achieve this by equipping one of the many church-related garbs or sets, such as the Black Church Set, or even Gascoigne's Set. Speaking to her will hand you some tasty lore, and the option to send her to a safe passage - there are more benefits to sending her to the Oedon Chapel. Also find Frenzied Coldblood(7) in this area. 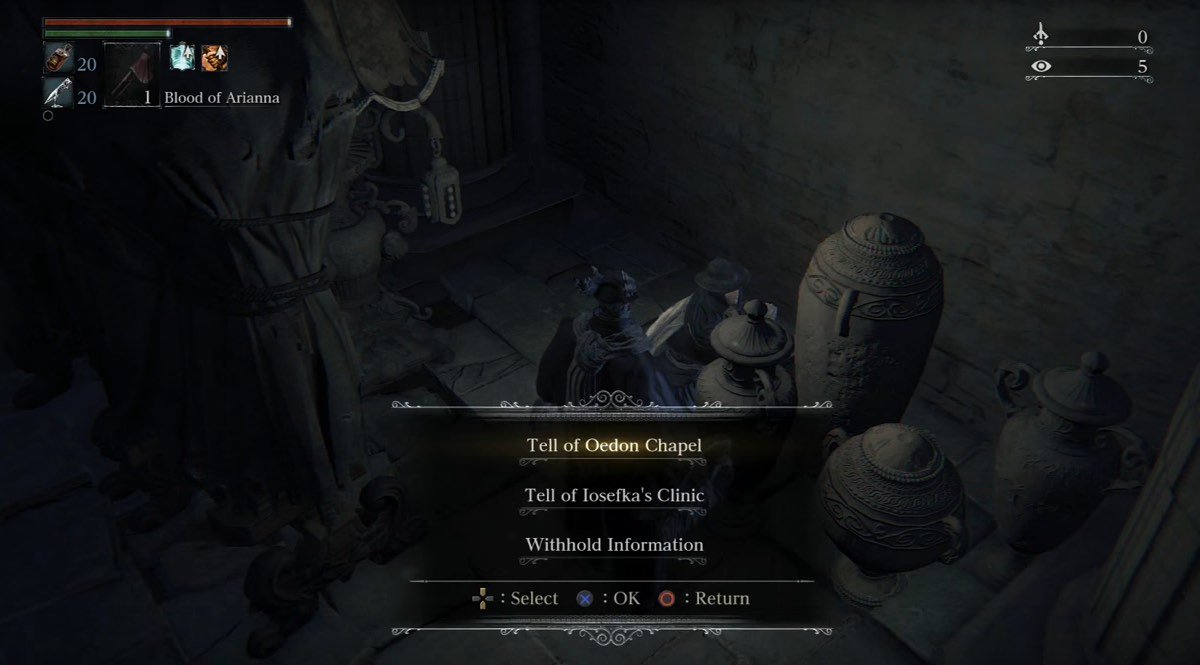 Head back up to the cell and continue past it to find a small staircase with four accessible floors. It is recommended that the player sprint to the fourth floor of this staircase and light the Lamp before attempting anything else, as the Snatchers are capable of one-shotting most players at this point.

The Lamp rests atop the spiral staircase, and will act as the center point to this area. Upon first using the Lamp, only the chapel is available. However on both sides of the Lamp, there are doors that can be opened from outside, providing a faster route through the area. On your way up, you'll find a Scurrying Beast if you take the stairs on your left, kill it to reap its reward. 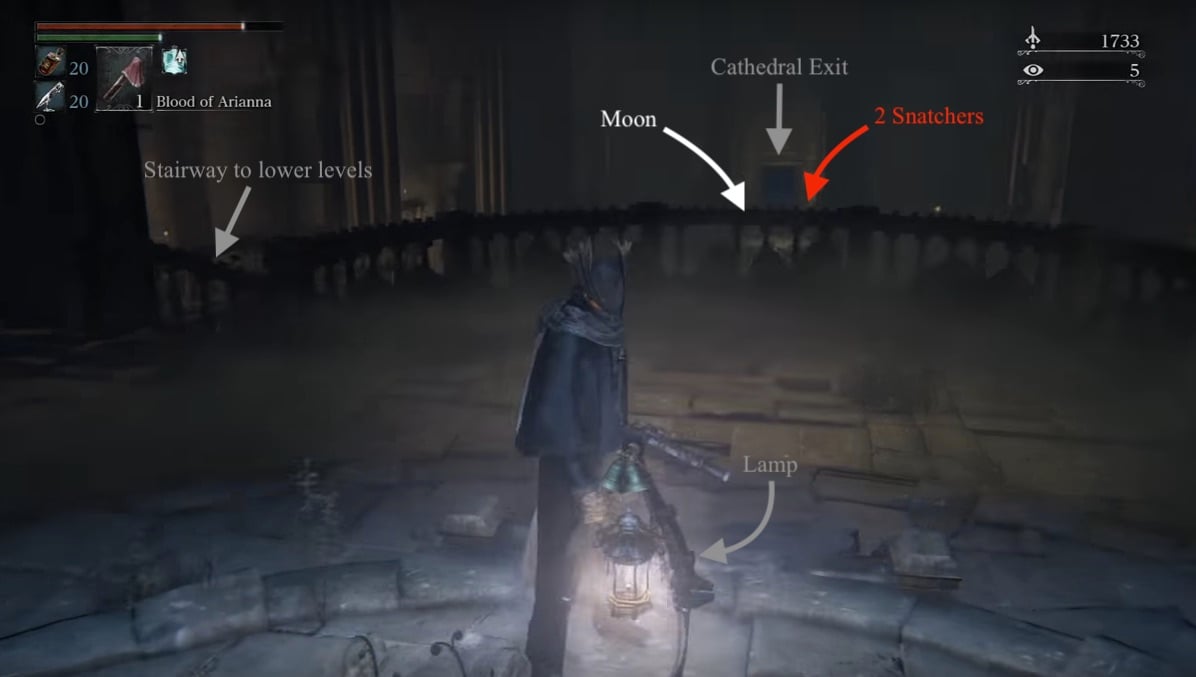 The doorway on the second landing of the spiral staircase leads to a small room in which an enemy is seen running across the doorway. As you may guess, this is a trap. As soon as you turn to attack the enemy you just saw, a second enemy lies in wait to the right of the doorway. These enemies are known as Witches of Hemwick. Letting either enemy land a back attack will result in a drawn out death animation, in which one enemy cuts your throat and the other beats on you. The best thing to do in this situation is to, instead of making a sharp left and attacking the first Witch immediately, run through the door to create distance from yourself and the Witches' grab attack, then manoeuvre around to deal with them 1-on-1. 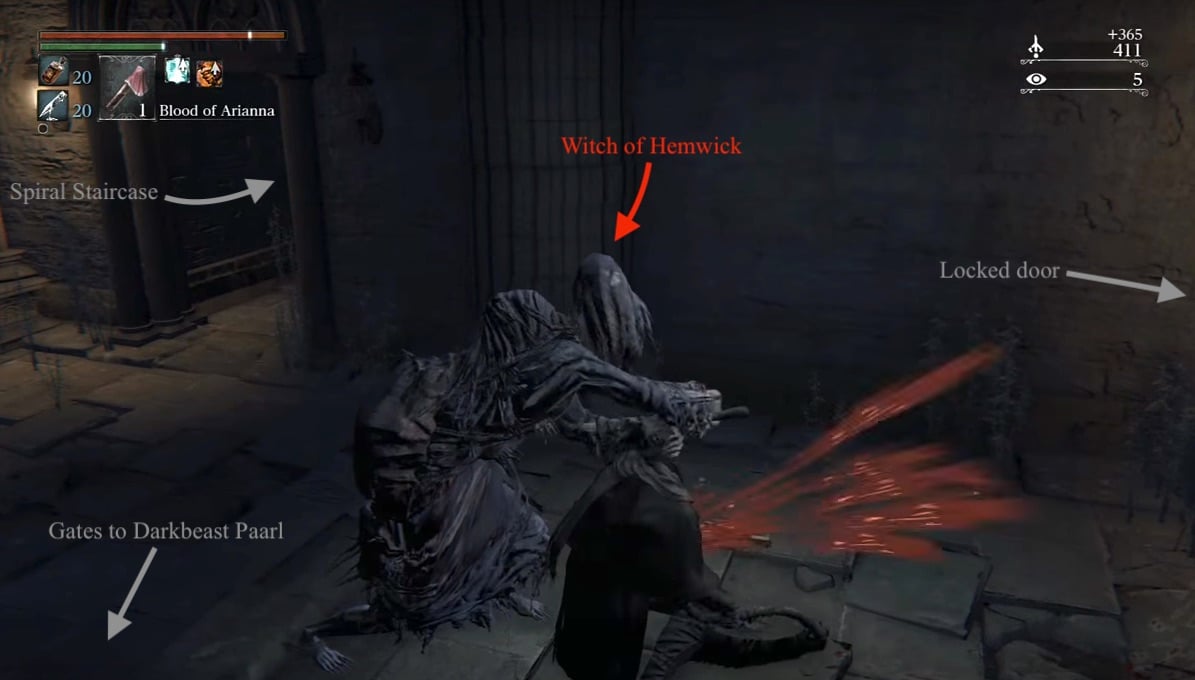 In this room a door on the left cannot be opened, but can later be accessed from outside the Chapel. After disposing of these two enemies, the player can progress into the room and deal with the corpses on the floor, which can be easily dealt with in three or four hits, proving very little of a challenge. Be sure to pick up the 6 Blood Vials and 10 Quicksilver Bullets from the corpses that are actually dead in this area. Do not enter the doorways in the back left and right of the room, as behind these doorways reside two very strong enemies that can one hit lower level characters. However when you do, past the gates are two Snatchers standing at a table. Upon defeating these enemies or choosing to move forward, the player will have to drop down a ledge and engage the boss of the area, Darkbeast Paarl. 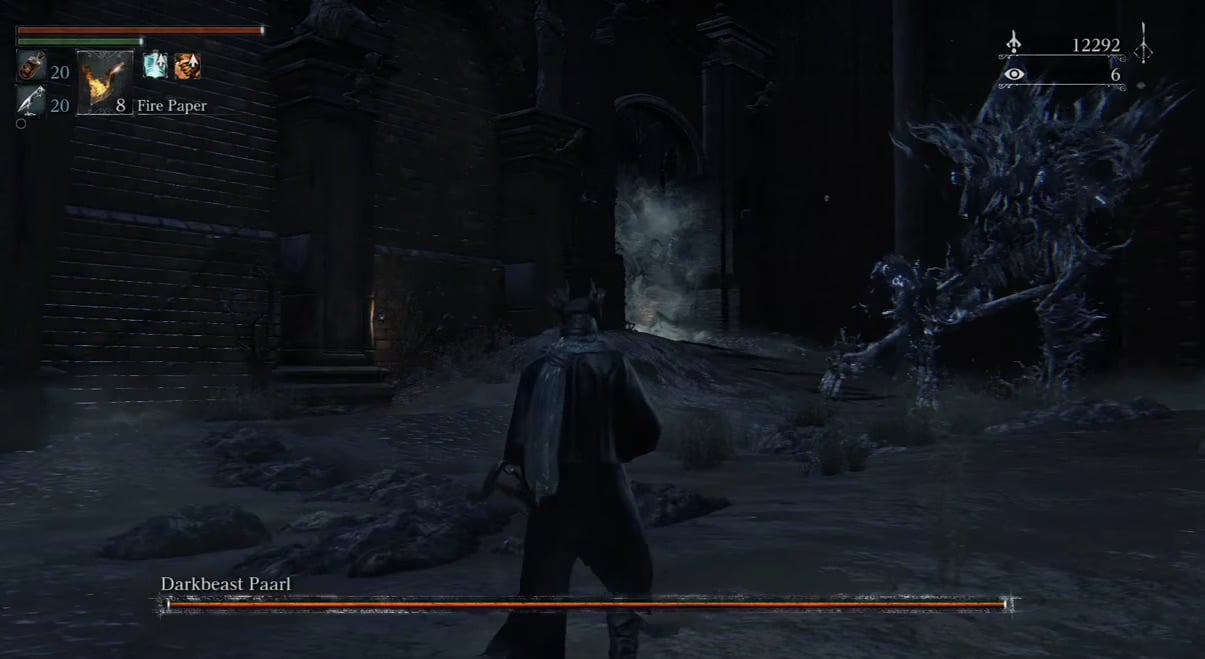 The ground floor of the area -the level that is just below the little balcony with the lamp from earlier- has two Snatchers guarding a Moon drop, in the middle of the floor of the cathedral you are in, and another Witch behind a pillar on the right. Upon leaving the cathedral, the player will be presented with what appears to be the ground level of Hypogean Gaol. To the immediate right there is a path leading down to the door to the room leading to the area boss, as well as a Snatcher and two Rabid Dogs. Continue straight down the corridor and stairs, then turn left to pick up the Twin Blood Stone Shards and a Frenzied Coldblood in this area too. You can also open the door down here and it will take you to the room where the two Witches planned their ambush on you. 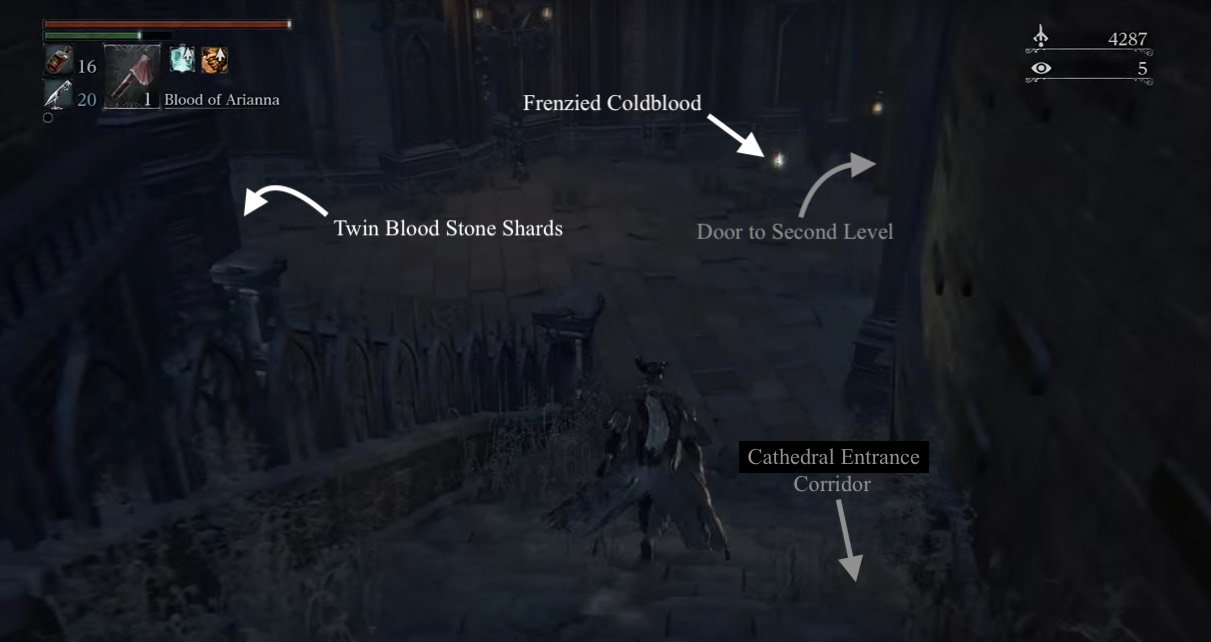 If you go back to the cathedral doorway you exited earlier, and continue the other way. Turn left into the first corridor possible and kill the Wandering Madness in the middle of the corridor for 2x Twin Blood Stone Shards. Follow this path to the end to open up a shortcut to the lantern you lit. Head back out the corridor to the open area and up the stairs to your left. Turn left once again to pick up a Frenzied Coldblood(8) behind a wall. Head back and towards the other direction on this platform to find a doorway on your left that will lead to a lift which we will leave for now, and instead climb the stairs again so you can roll onto a carriage and avoid damage from the 2 Maneater Boars and multiple Rabid Dogs in the area below. A good way to deal with the dogs of this area is to expend a couple of Pungent Blood Cocktails to gather them for easier an easier dispatch via your weapon or Molotov Cocktails. Avoid the pigs while you do this as it makes your flight a whole lot harder if you aggro them. Once the Rabid Dogs are defeated, engage the pig under the walkway first, as this one guards some very useful 5x Bolt Paper. 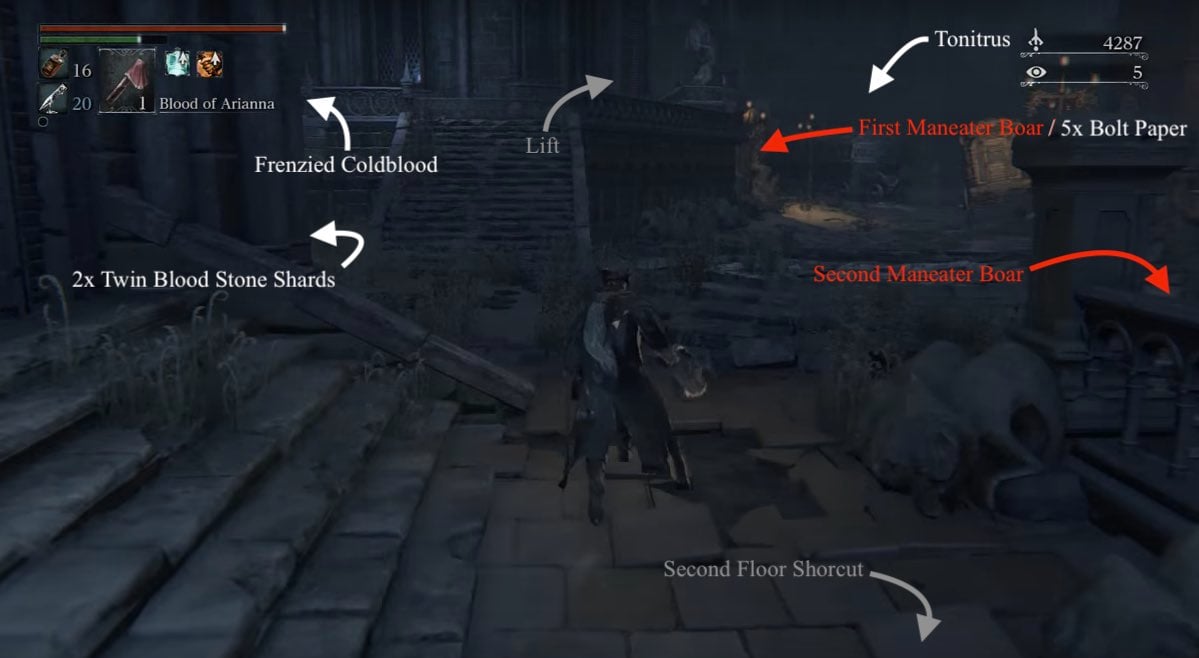 At the far left of the area (coming out of the cathedral) you'll find another 2 Rabid Dogs and their Snatcher master guarding the Tonitrus, a very good mace. You can defeat them to obtain it but if you would rather not, then the very useful Pungent Blood Cocktails can come in handy to lure the puppers away momentarily. The second Boar hides on the downward staircase on the right side. Defeat it to gain access to a very lootable area with 3 more Rabid Dogs. Find 3 Madman's Knowledge on corpses triangulating each other at a currently unmanageable door, the Yahar'gul Set on a coach driver on the carriage, and climb the stairs on the right of the doors to find a Frenzied Coldblood(8) on this balcony.