Upper Cathedral Ward is a location in Bloodborne. This is an area after Healing Church Workshop. 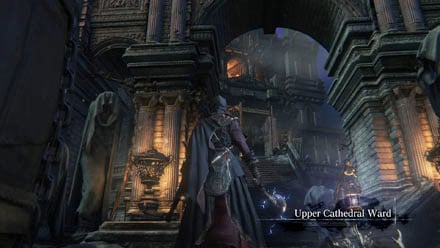 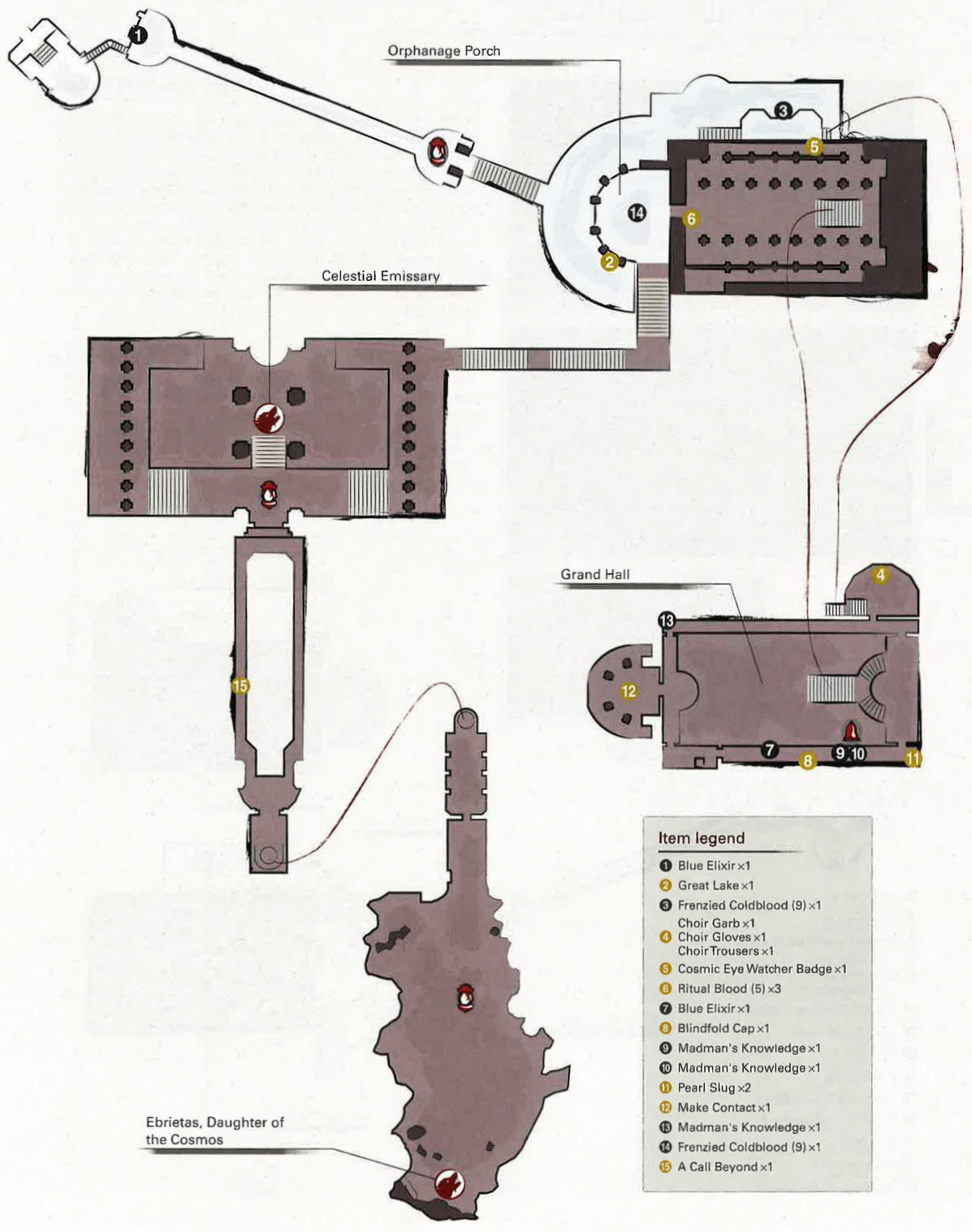 Getting to the Upper Section

To access Upper Cathedral Ward you need to obtain the Upper Cathedral Key which is found in Yahar'gul, Unseen Village. When you have the key, head to the top of Healing Church Workshop and open the previously locked door. Proceed through, and the title should prompt, letting know you have arrived. 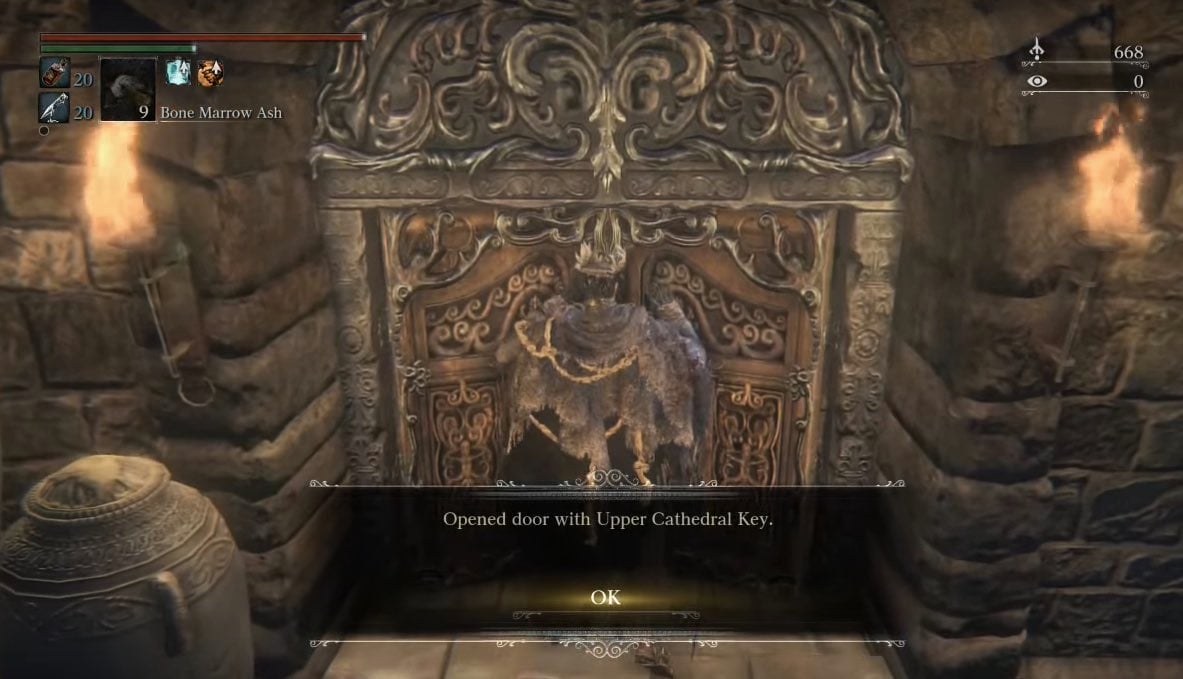 Top of the Ward

When you first enter, head up the steps infront of you and kill the first Celestial Larvae enemy. Carry on heading up the stairs. You'll come to a gate and a bridge, pick up the Blue Elixir from the body at the gate then head down the bridge. Through the fog, two Church Servants will approach you. Up here they're stronger than down in the normal Cathedral Ward, so be careful, but engage them the same as you would any other time. You'll find the area lamp past them. 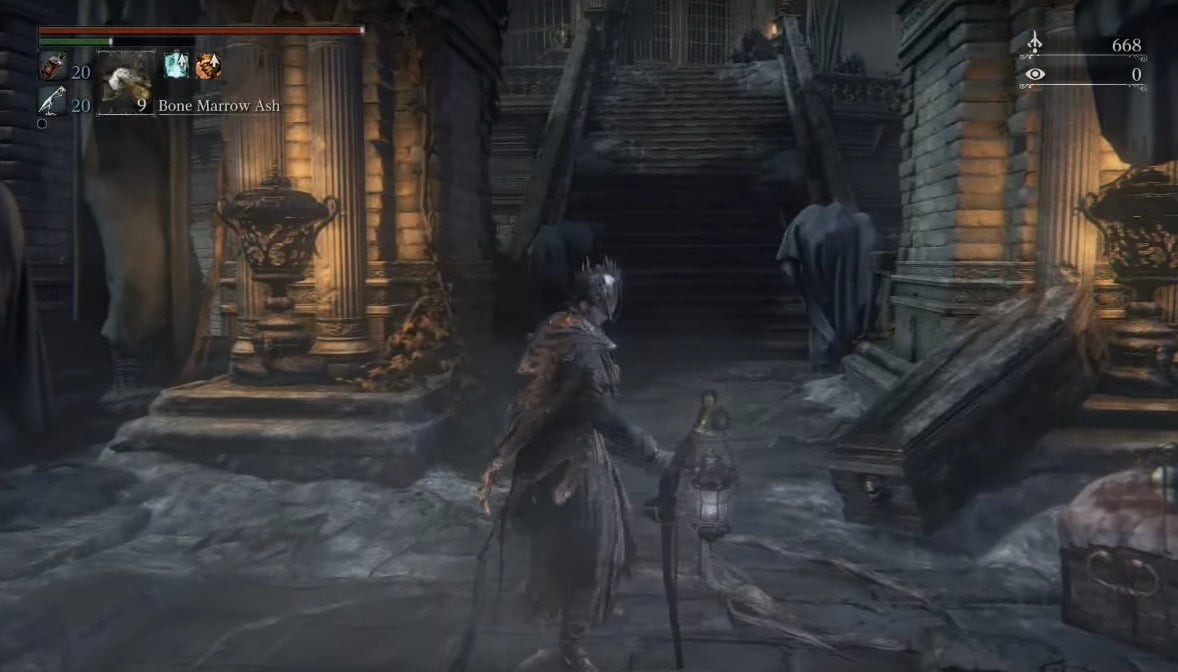 Past the lamp, carry on up the stairs and you'll come out to a semi-circular area, patrolled by many Celestial Larvae. Go right first, kill your way through the group to pick up the Great Lake rune at the dead end. Head back and before continuing up the second set of stairs, the Carrion Crows to the side of them, guard a body with a Frenzied Coldblood(9). Once you've picked it up, head up the stairs. You'll see a bonfire ahead of you and another Church Servant at the top of the stairs. This one is carrying a pretty big flame imbued scythe, so watch out. If you pull him down the stairs you can get him to walk through the bonfire which can shave a bit of HP off him. No matter how you deal with him, head up the stairs and prepare to be quiet.

At the top of the stairs you'll walk into a dark room with the unmistakeable sound of a Brainsucker. Creep up behind him and take him out. Make sure to pick up the Choir Set before you head out into the corridor. On the right you'll see a lootable body at the end of that corridor which holds a Madman's Knowledge. When you approach the body a Wolf Beast will burst through the window. Note that he has blue eyes instead of the normal red, the Scourge Beasts in this area are amped up compared to those you've fought before, so be prepared to parry, backstep and if you need to, run into the room where the Brainsucker was as it can't get through the door.

As you can't get through the door next to where the wolf burst in, head back to the other end of the corridor, open the door and you'll find yourself on a balcony above the main hall. When you head down the stairs three of the same variety of  Scourge Beasts will fall from the ceiling and destroy the chandelier. As a jump scare, this works, as a device that makes the fight harder, it's even more effective as now there is very little light in the room. Try to pull the beasts one at a time. Alternatively, lure them to the door so they can't go through and cheese it. Patrolling on the left side of the room will be another Scourge Beast and around the right, you'll find a Brainsucker. 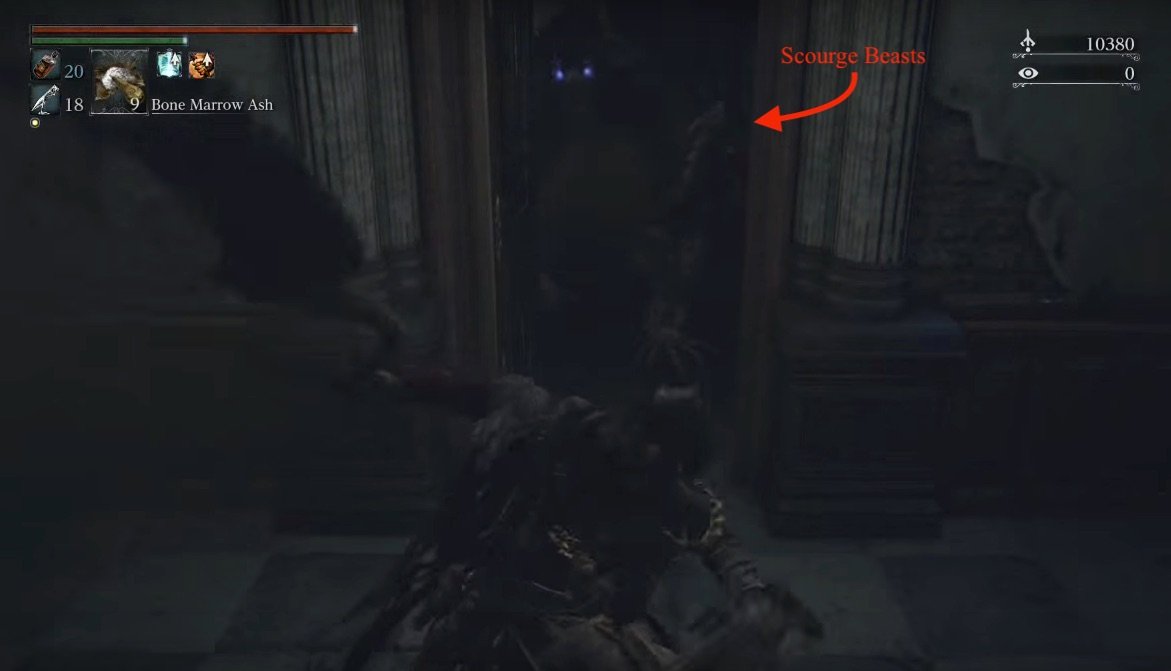 Clear the area then head to the rear of the room on the right side. Going down the tight corridor here will net you the Cosmic Eye Watcher Badge, guarded by a Brainsucker. At the locked main door is a body with some Ritual Blood(5). Head back to the other side of the hall and head down the tight corridor with the Scurrying Beast at the end. DO NOT chase it. Hiding around the right corner is another Brainsucker; a good strategy to kill the Beast without losing insight, is to chuck a Molotov at it before it leaves the room. Head up the ladder when you've sorted this area out.

When you reach the top of the ladder you'll be out on a balcony with a Brainsucker standing looking out over the room, which upon attacking, will lure another one out for an unfair battle. Killing them will cause one of them to drop the Orphanage Key.Take the stairs down to open a shortcut back to this point next to where the wolf beast burst in, then head back up. Open the doors on the balcony and you'll see a statue striking a pose. Interact with it and you'll learn the 'Make Contact' Gesture. For now, you're done here so head back down to the room you ended up in after climbing the ladder to find a bunch of goodies scattered across a hallway. This includes: Blue Elixir, Blindfold Cap, 2x Madman's Knowledge, and Pearl Slug. Continue down to the bottom of the hall. You can now open the enormous doors here. 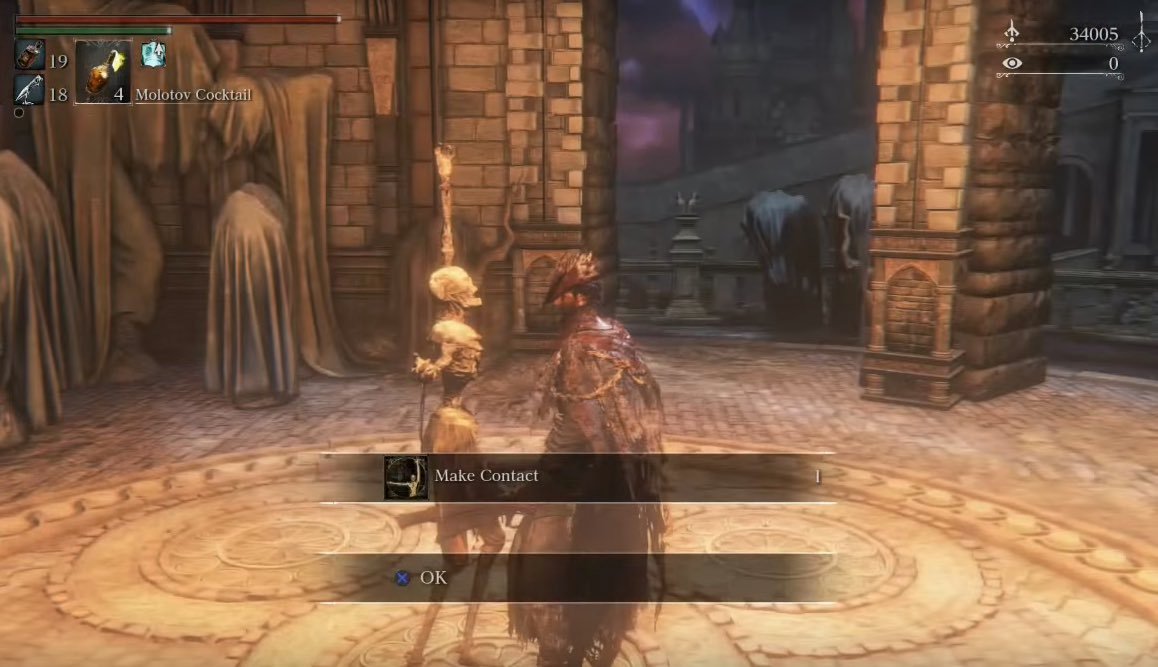 This leads to the next section: The Orphanage.