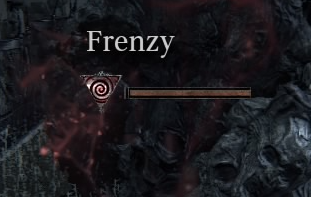 Frenzy is a mechanic of Bloodborne.
It fills up like a bleed or poison meter, and it lowers both your damage intake and output.

Frenzy works similarly to bleed in Dark Souls. When the Frenzy meter is filled, a large amount of the player's health is lost instantly. However, unlike the Bleed status, Frenzy will continue building up once you receive it. Because of this, you don't necessarily need to keep getting hit to Frenzy; simply getting hit once or twice can cause it. It will eventually cap and stop building up. (needs testing whether Frenzy build-up stacks or if the timer is reset on each hit). It is speculated that Frenzy is the result of the Hunter being forced to process information incomprehensible to humans, such as information about the Great Ones, Eldritch Truth, or Cosmos.

Some enemies in Bloodborne inflict Frenzy. They are: