Hunter Axe is a Trick Weapon in Bloodborne.

"One of the trick weapons of the workshop, commonly used on the hunt. Retains the qualities of an axe, but offers a wider palette of attacks by transforming. Boasts a heavy blunt attack, leading to high rally potential. No matter their pasts, beasts are no more than beasts. Some choose this axe to play the part of executioner."

Results from testing on an unarmored level 120 character with a +10 Hunter Axe with gems. Numbers are rounded to the nearest 100th. 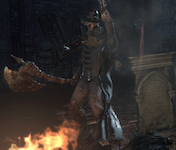 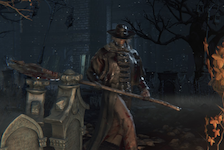