Stats are player attributes in Bloodborne. When you level up in Bloodborne you increase an attribute by one point. Attributes like Strength and Skill are represented by numerical values and determine what armor and weapons can be equipped, while attributes like Arcane and Bloodtinge govern how much damage certain Weapons or Items do. Attributes also give your characters increased stats, e.g. Vitality increases your hit points and Endurance improves your Stamina.

Your character's current level, as determined by your expenditure of attribute points.

Level also affects the amount of physical defense you have, see Defense Increase per Level.

Blood Echoes are the main currency in Bloodborne.

Insight is a minor currency that represents the depth of one's inhuman knowledge.

The Strength stat governs heavy physical weapon ATK as well as increasing visceral damage. Determines whether or not you can use certain weapons.

The Skill stat governs more nuanced physical weapon ATK and increases your visceral damage. It also Determines whether or not you can use certain weapons.

The Bloodtinge stat governs power of weapons that deal Blood damage (like most firearms and the Chikage, Bloodletter and Simon's Bowblade).

It determines whether or not you can use certain weapons.

The Arcane stat governs power of Arcane ATK. Determines whether or not you can use certain weapons. Also increases Discovery Rates.

HP is the amount of damage you can take before you die.

Stamina governs the amount you can attack and dodge before having to wait for it to refill.

The rate at which items will drop from enemies. The higher the number the more frequently they will drop.

Defense against physical (non-magical) attacks (increased only by gaining levels).

Resistance to rapid poison attacks. The higher this attribute, the more resistant you are.

Resistance to the lure of frenzy. The higher this attribute, the more resistant you are. Frenzy carves out roughly 70 to 80% of your max HP.

The higher this attribute, the closer you are to beasthood when temporary transformed. (Note: raising the Beasthood meter will not transform your character into a beast. However, the Beast Claw's transformed state does give you beast arms, and the Beast's Embrace rune transforms your character's appearance and makes them weaker to Fire and vs. Beast damage, with the benefit of stronger beasthood and an improved move-set for the Beast Claw).

Reduction of damage from blunt attacks.

Reduction of damage from thrust attacks.

Reduction of damage from firearms and other blood attacks.

Reduction of damage from Arcane attacks.

Reduction of damage from Fire attacks.

Reduction of damage from bolt attacks.

Determines the damage of your trick weapon (normal physical damage).

Determines the damage of your firearm and weapons that deal Blood damage like the Chikage, the Bloodletter and Simon's Bowblade.

This stat determines your arcane damage.

This stat determines your fire damage.

This stat determines your bolt/lightning damage.

Determines the Slow poison stackup. This is the poison which stacks up to become a damage over time as we know.

Determines the rapid poison stackup. This works not as a "poison" and does not give the target a damage over time. (It works like Bleed in Dark Souls 1 & 2)

This determines the damage you do to Kin enemies.

This determines the damage you do to severely transformed Beasts 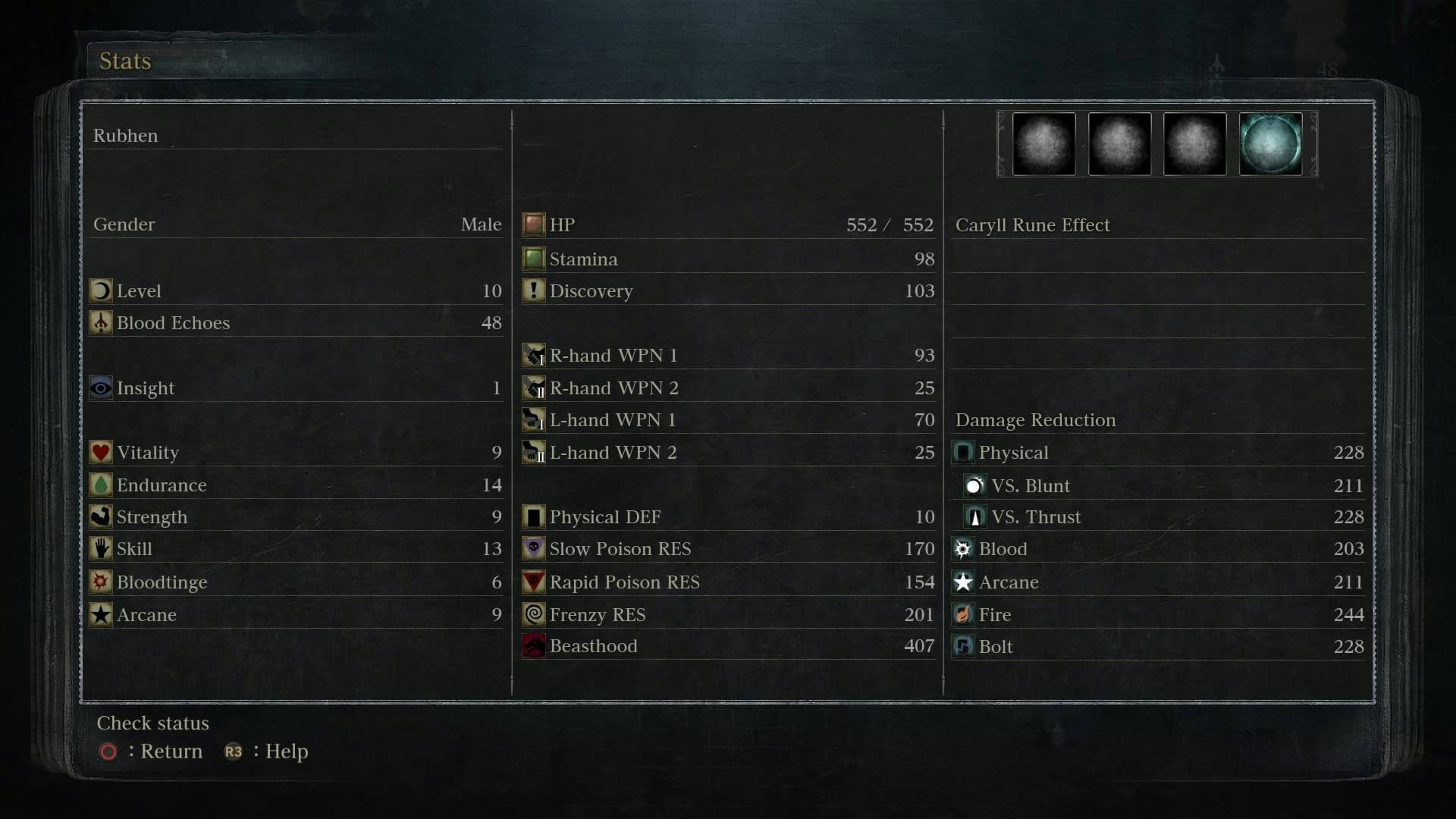