Visceral Attacks are the equivalent of ripostes in Bloodborne. Performed after a successful Gun Parry, players can inflict massive damage on enemies that are in a susceptible state. 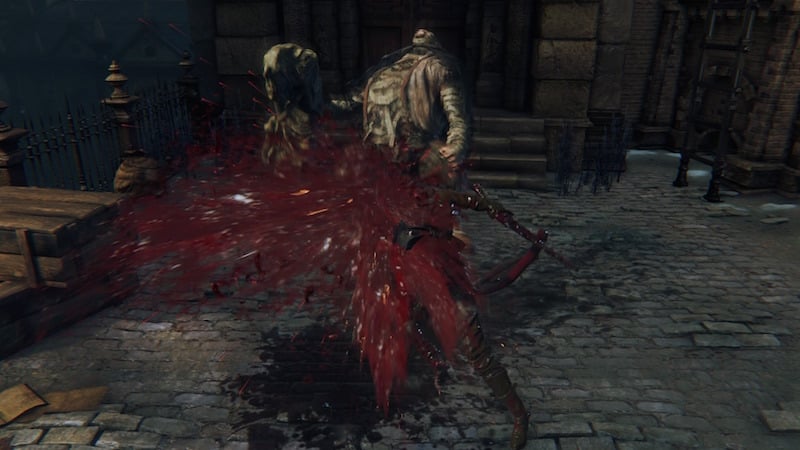 If the trigger is successful, you will hear a very specific sound, and the enemy will go into a "stunned" animation.

From this point on, walk up to the enemy and press R1 to perform a Visceral Attack, which will knock the enemy down.

- Visceral Attacks scale with Blood Level and the Skill stat.

- This means that weapons specced for Blunt, Arcane, Fire or Bolt, will have considerably weaker Visceral Attacks.

- Weapons that deal primarily Blunt damage, but are not specced to do only Blunt damage (Adept Gems) have normal Visceral Attacks.

- Some bosses can be parried, while others will be left open to a Visceral Attack after absorbing sufficient damage.

- A Visceral Attack will restore all orange health.

- For the duration of a Visceral Attack, you are invulnerable.

- Visceral damage increases dramatically between 1 and 10 points in Skill.

- Visceral damage increases additively by roughly 0.5% per point in Skill after Skill reaches 50.

- You may be visceralled by hostile hunters and certain bosses (Maria and Gehrman).

- After a Visceral Attack, there's enough time to heal or dash away.

- After stunning an enemy, there's enough time to perform a single roll towards them, and press R1.

- The player need not be in front of an enemy to trigger a Visceral, but the player does need to be directly in front of a boss if that boss is not otherwise parryable.

-Base visceral attack damage is not connected to the weapon you are using. This means that the damage is the same regardless of whether you are using the Blade of Mercy, Kos parasite, the beast cutter, or even just your bare fist.

-The damage does not depend on your weapon’s attack rating or on the weapon you use per se. However, any blood gems that increases thrust damage will increase visceral attack damage as well since viceral damage is considered a thrust attack. But, the effect any gem has on visceral damage is independent of the regular effect it has on your weapon. For example, you could stack thee adept thrust up gems on a beast cutter, a weapon that has no thrust attacks. This would not increase the damage of regular attacks. But, it would increase your base visceral attack damage by the amount indicated by the gems.

-The threaded cane's whip form increases skill scaling by +15%. This has the same effect on visceral damage as a +15% Sharp gem when the cane is in that form.

-Logarius’ wheel’s transformed form decreases all physical damage by 30%. This includes the damage of visceral attacks.

You can read a detailed article on visceral attacks here.