Simon, the Harrowed is a non-player character in Bloodborne. He was added with The Old Hunters DLC 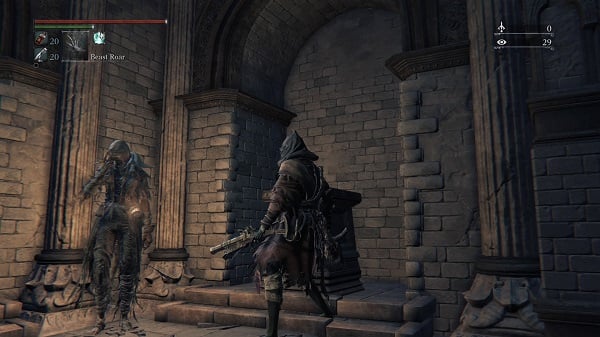 "You seek nightmares, and the secrets within, do you not?"

This character can be found at The Hunter's Nightmare, and later on at Research Hall and Fishing Hamlet

By shortcut back to Hunter's Nightmare lamp:

You're a hunter with your sanity, aren't you?
Must've taken a wrong turn then, eh?
Well, we're more alike than you think.
This is the Hunter's Nightmare, where hunters end up when drunk with blood.
You've seen them before.
Aimless, wandering hunters, slavering like beasts.
This is what the poor fools have to look forward to.
So, don't be brash, turn back before it's too late.
Unless, you've something of an interest in nightmares?

Ahh, yes, I see…
You sense a secret within the Nightmare,
And cannot bear to leave it be.
As if the spirit of Byrgenwerth lives on within you!
Such inquisitive hunters will relish the Nightmare.
But beware, secrets are secrets for a reason.
And some do not wish to see them uncovered.
Especially when the secrets are particularly unseemly…

"Yes, as it should be.
Hunt your beasts, and think no more on the secrets of the night.
That is the very best a hunter can do.
Just don't let the blood intoxicate you."

If he kills Ludwig:

"Oh, he's well and truly gone, now.
A tragic figure. But he will shame himself no longer.
He died with his ideals untarnished.
He was a true hero, and earnt that much, at least.
Here, this is Ludwig's guiding Light.
The blinding thread, that lead, and mislead, that consummate hero.
The poor brute."
"Do you know why the Hunters are drawn to this Nightmare?
Because it sprouted from their very misdeeds.
Things that some would rather keep secret.
A pitiful tale of petty arrogance, really.
High time someone exposed the whole charade."
"Now, now, go on ahead.
You seek nightmares, and the secrets within, do you not?"

At the Research Hall lamp

Oh, hello. Not a pretty sight, is it?
The true face of the blood-worshipping, beast-purging Healing Church.
But that's not all.
You seek the secrets field by the Nightmare, do you not?
Then here's what you must do.
Climb the Astral Clocktower, and kill Maria.
She hides the real secret…

At the Lighthouse Hut lamp:

…Oh, you, I'm afraid, I've made a botch of things…
…I can hear the bell, now…
…The beast-hide assassin, he's after me…
…Again and again…
…It never ends…
…Please, I need you to do something…
…This village is the true secret.
Testament to the old sins…
…It feeds this Hunter's Nightmare…
…Please, bring to an end to the horror…
…So our forefathers sinned?
…We hunters cannot bear their weight forever…
…It isn't fair, it just isn't fair…

If you attack him:

Simon is a rather unique character in the world of Bloodborne, having inhabited several different positions in support of and in opposition to the Healing Church, as a Healing Church Hunter. Most likely originating as a simple Yharnam citizen, Simon hailed from the earlier days of the Healing Church's initially glorious (and eventually disturbing) roots. Like many others before and after him, he was a Church Hunter following in the footsteps of Ludwig the Holy Blade who heeded the call to combat the scourge of beasts. Simon admired Ludwig, like most of his time, and saw him as a hero, even after his transformation into a hideously disfigured and grotesque beast. Going by his dialog, it can be inferred that Simon was familiar with Ludwig both in his human years and well after his downfall.

Adding to his distinguishing characteristics, Simon held a strong distaste towards firearms. As the nature of the hunt and the technology used continued to advance towards bigger guns, even those supported by Ludwig himself for hunting larger beasts, Simon distanced himself from his fellow hunters by requisitioning a specially-crafted weapon from the Healing Church Workshop: a bow that could be folded into a blade. A rather isolated figure among the Church Hunters, most scoffed at Simon's choice in arms, with very few of his close friends and confidants actually respecting his tastes and decisions. As the Church Hunters became more proactive and began stalking Yharnam citizens "before the signs of the scourge manifested", Simon joined the ranks of the Church Hunters who hid in the shadows, disguising himself as a common wayward vagabond.

Yet somewhere along the line, Simon grew disillusioned with and possibly even horrified by the Healing Church, and soon aimed to expose its true misdeeds to the rest of the world. Whether it was the hunt, the stalking of citizens who showed no signs of the scourge, or the discovery of the nefarious experiments being conducted in the name of the Healing Church which led to his disillusionment is unknown. At some point, Simon found a way into the Hunter's Nightmare while retaining his sanity, much like the player Hunter, rather than joining the ranks of the countless old hunters consumed by blood who were condemned to an unending hunt for all eternity. His exact goals were uncertain, however Simon likely intended to put an end to the source of the Nightmare.

However, if the player allows Simon to pursue his quest, once he drew too close to the secrets held within the Nightmare, he catches the attention of the beast garbed assassin of the Healing Church, Brador. Attacked by the man repeatedly, a fatigued and mortally wounded Simon would make his way to the lighthouse hut in the fishing hamlet within the Nightmare, where he would eventually fall to his wounds, but not before imparting his final wishes to a worthy hunter to continue his quest and end the Nightmare once and for all.

Attack him a few times with a strong attack until he becomes hostile (sidenote: he will stay hostile for the rest of the game) then let him walk out into the Cathedral. He will shoot three arrows at you - you can simply walk left to avoid for the first two and then walk right for the third one. After that quickly close the gap and empty your stamina bar into him, then quickly jump back because he will use a meele attack. Do this until he is dead and drops the bowblade. I would recommend using at least a +3 weapon.

Used +4 Threaded cane right after finishing Amelia. Aggro him, take him into the cathedral and hit him with the whip. You can get him to walk into a pillar and then hit him without any fear of being hit. Only shoots in increments of three, so very easy to dodge; if he uses the sword form, VERY easy to visceral him. 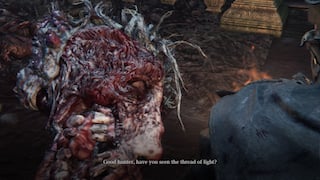 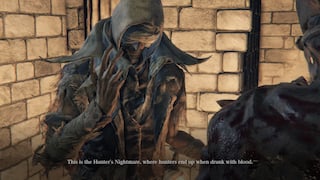 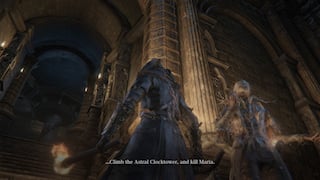