Valtr is a non-player character in Bloodborne. He was added with the Patch 1.07

This character can be found inside the shorcut hut to the right of the first lamp in Forbidden Woods. He is the leader and Master of The League

Valtr's summon sign appears in the Blood River of the Hunter's Nightmare, just before the cavern to fight Ludwig, take a right turn and you will find Messengers ringing his bell there. You must also equip the Impurity Rune to be able to summon him. Additionally, Valtr can be summoned in the Grand Cathedral of the Old Hunters' Nightmare to fight Laurence, provided you have Laurence's Skull.

Ahh, a new face, are you? And an accomplished hunter... it would appear. *chuckles* I am Valtr, Master of the League. Members of the League cleanse the streets of all the filth that's spread about during the hunt. Like any half-decent hunter ought to, you know? Haven't you seen enough of these wretched beasts, freakish slugs, and mad doctors? Sentence these fiends to death. With the help of your League confederates. What do you say? Why not join the League?

Edit - Upon joining the League:

"Now, there is one thing you must know. By the oath of the League, those who bear its rune will see vermin. Vermin writhe deep within all filth, and are the root of man's impurity. All vermin are to be crushed. The League exists to expunge all vermin, ridding us of any trace of human corruption. And so, until we are rid of all vermin, you must continue to hunt and kill. This bloody fate is ours alone. Do not expect the world to grasp our work... But remember, the confederates will always have my blessing... And each other. Always."

"Yes. As a hunter well should. Commit this to heart."
Our own Caryll rune, symbol of the League." ( Obtain Impurity)

Refuse: Nothing happens.
Valtr requests you to reconsider.
You can talk to him again to join.

"The night brims with defiled scum,
and is permeated by their rotten stench.
Just think, now you're all set to hunt and kill to your heart's content!"

"Well, how quaint... You scoff at the League?
Then you are yourself a beast! A defiled mess of rotten flesh!
When you are dead, your rank blood will curdle with vermin!"

When player is killed:

Female Character: "Vermin writhe and squirm... You no good wench."

A Yharnamite's favourite tale tells of a group of constables, who once chased a Beast back to Yharnam, all but one were killed. It was said he killed and ate the Beast in vengeance. This is implied how Valtr earned his title "Beast Eater".
Source: Constable Set Item Description

After crushing 5 vermin, return to Valtr's location to pick up the Master's Iron Helm.

Once you pick up the Master's Iron Helm Valtr will no longer be wearing it when he is summoned by the Old Hunter Bell.
His name will also be represented as "Valtr, Beast Eater", instead of "Valtr, Master of the League" when summoned. This implies that he is no longer the master as he has passed the title on to the player by leaving them his helm. 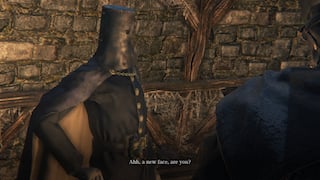 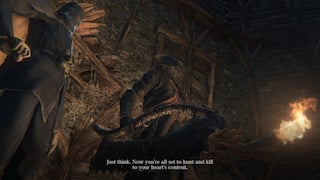 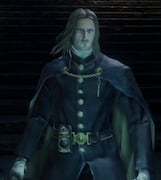 Easy kill: Attack him and quickly run down to the elevator you've opened up and activate it, he will plunge to his death trying to follow you (this method also works for the hunter that spawns after Valtr's death or departure) just beware of your enemy pulling a plunging attack as they fall.