Eileen is an assassin whose sworn duty is to dispose of other hunters that have been corrupted by their lust for blood. Like the player, she hails from outside Yharnam and is a foreigner to the region, but her presence in the city is driven by an entirely different set of motives; she makes a point of keeping a low profile operating in the shadows, and you may never meet her in the first place if you don't go out of your way to explore. You can start her quest either on the Dry Dock - Rafters in Central Yharnam or to the left of the Oedon Chapel's front entrance in the Cathedral Ward, and your choices after that point will determine her fate. Helping her defeat Henryk in the Tomb of Oedon is the tipping point of her quest - failure to do so before entering the Forbidden Woods for the first time will sometimes result in her becoming your enemy, and will prevent you from receiving any of the successive rewards other than the Crow Hunter Badge. It is best to complete the Tomb of Oeden portion of the quest before progressing further.

Upon speaking with her at the sewers:

Oh, a hunter, are ya? And an outsider? What a mess you've been caught up in. And tonight, of all nights."

Prepare yourself for the worst. There are no humans left. They're all flesh-hungry beasts, now."

Still lingering about? What's wrong? A hunter, unnerved by a few beasts? Heh heh... No matter."

"Without fear in our hearts, we're little different from the beasts themselves." (Gives 'Shake off Cape' expression)

"What are you still doing here? Enough trembling in your boots. A hunter must hunt."

"...not to go near the tomb below Oedon Chapel in the Cathedral Ward."

"Don't go near the tomb below Oedon Chapel in the Cathedral Ward."

"I have business there first..." (giggles)

After the Tomb of Oedon hunter fight:

(Breathing Heavily) "That wasn't necessary of ya."

"But you have my thanks."

"You must have killed Gascoigne as well then."

"But try to keep your hands clean... The Hunter should hunt Beasts."

"Leave the hunting of Hunters, to me." (Laughs) (Gives Approval gesture) (Runs away)

At the top of Grand Cathedral steps when friendly:

"I'm afraid I've made a bit of a blunder. I'm just going to have a short rest."

"No more dreams for me. This is my last chance."

"What a fool I am. I'll have to tread carefully."

"But that thing still lies in wait. Turn back. This is my score to settle." (Gives Wait gesture)

"My prey lies in wait this way. Turn back. This is my score to settle."

After the Grand Cathedral hunter fight:

"Don't you ever listen to your elders? No matter, you did save my life."

"I don't seem to be apt for this life anymore... My glory days were long ago now..."

"This too is hunters' work, but bears no honor. A burden you may choose to carry."

"The decision is yours alone. Ahh, my eyes grow heavy..."

At the Grand Cathedral, when hostile and hunting the player:

(Laughter) "Few hunters can resist the intoxication of the hunt. Look at you, just the same as all the rest..."

"The hunters must die... The nightmare must end..."

"Only I can stop this madness!" (continued laughter)

When Eileen has been significantly injured, "The beasts cannot be stopped. What good are hunters now?"

(Yelling) "Your blood is mine! A hunter's blood for me! Your punishment is death! Death to hunters!"

"Enough of this terrible dream!" (laughter)

"All hunters must die!" (laughter as her body fades)

Eileen seems to have been a former hunter herself at some point. If you fight Eileen and are killed by her, her dialogue "You still have dreams? ...Tell the little doll I said hello..." indicates that she knows of both the Hunter's Dream and the Plain Doll, suggesting that she was a former hunter trapped in the Dream, much like the players themselves, who managed to break free from cycle of death and awakening. In the encounter with her at the foot of the Grand Cathedral, she mentions that she no longer dreams, and therefore that death is now permanent for her. 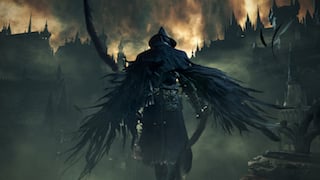 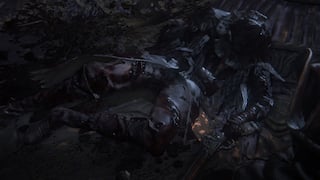