"Certain Church hunters obfuscate their identities and slip into the nooks and crannies of the city. These hunters are keen to early signs of the scourge, serving as a first line of defense against its outbreak. Or perhaps, when the time is ripe, they find signs of the scourge where there are none. It just goes to show, the corner beggar is not always who he seems."

Transformed Man or The Suspicious Beggar is an NPC in Bloodborne. He can be sent to Iosefka's Clinic or Oedon Chapel.


The Suspicious Beggar is first discovered, breathless, standing above several mauled bodies and eating one of them. He asks the Hunter if they were responsible for killing the Snake Parasite below the balcony, then thanks them and asks if they know of any safe places. He'll give you two Pungent Blood Cocktails upon answering with a yes. The Suspicious Beggar is actually a massive Abhorrent Beast in disguise, and when attacked, he will transform into his true form.

The Suspicious Beggar can be found in the Forbidden Woods. After making your way through the first part of the Forbidden Woods or riding down the shortcut elevator in the building by the lamp, drop down on the path ahead and turn left, then enter the building across the small bridge and go up the ramp to the right. Go out the window, follow the path up the ladder to the left, traverse the gears above where you can find the Cannon, and the Beggar will be out on the rooftop eating a corpse.

If told about Oedon Chapel, the Suspicious Beggar will move just outside Oedon Chapel near the door across from the lantern, by a cart.

Note: If you wait for the red moon to appear before meeting him, he will disappear for the rest of the playthrough.

"Blimey! Don't scare me like that. On a night like this... I took you for a monster."

"Oh, thank the stars, you're fairly normal... Was it you put down that awful beast?"

"Oh, that thing had me be trembling, frozen in me boots. And then you came along."

"Would you know of any safe havens?"

"Oh you've given me hope... Terribly kind of you."

"Take this. It's all I can offer as thanks." (gives Pungent Blood Cocktail)

"I owe this to you. It's a wonderful place."

"The way proper Yharnamites ought to live!"

"I really do owe you a terrible lot."

"Finding me such a nice place to live."

"This is a smashing place."

"it's everything Yharnam ever had, and more!"

"Oh, you are a sick puppy! You drink the blood of half the town, and now this! And you talk of beasts? You hunters are the real killers!"

"Have you got a screw loose? Or is it your... animal intuition"

"You hunters have got more blood on your hands."

"Die! Die, die! Hunters are killers, nothing less! You call ME a beast? A Beast!? What would you know? I didn't ask for this!"

"Rancid beasts, every last one of us..." 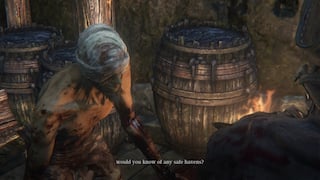 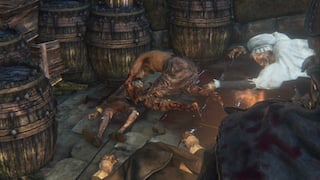 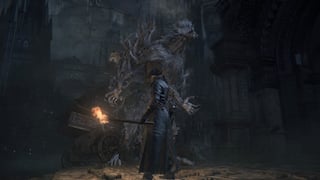