Nightmare Frontier is a location in Bloodborne. This area features an interconnected map and challenging enemies. 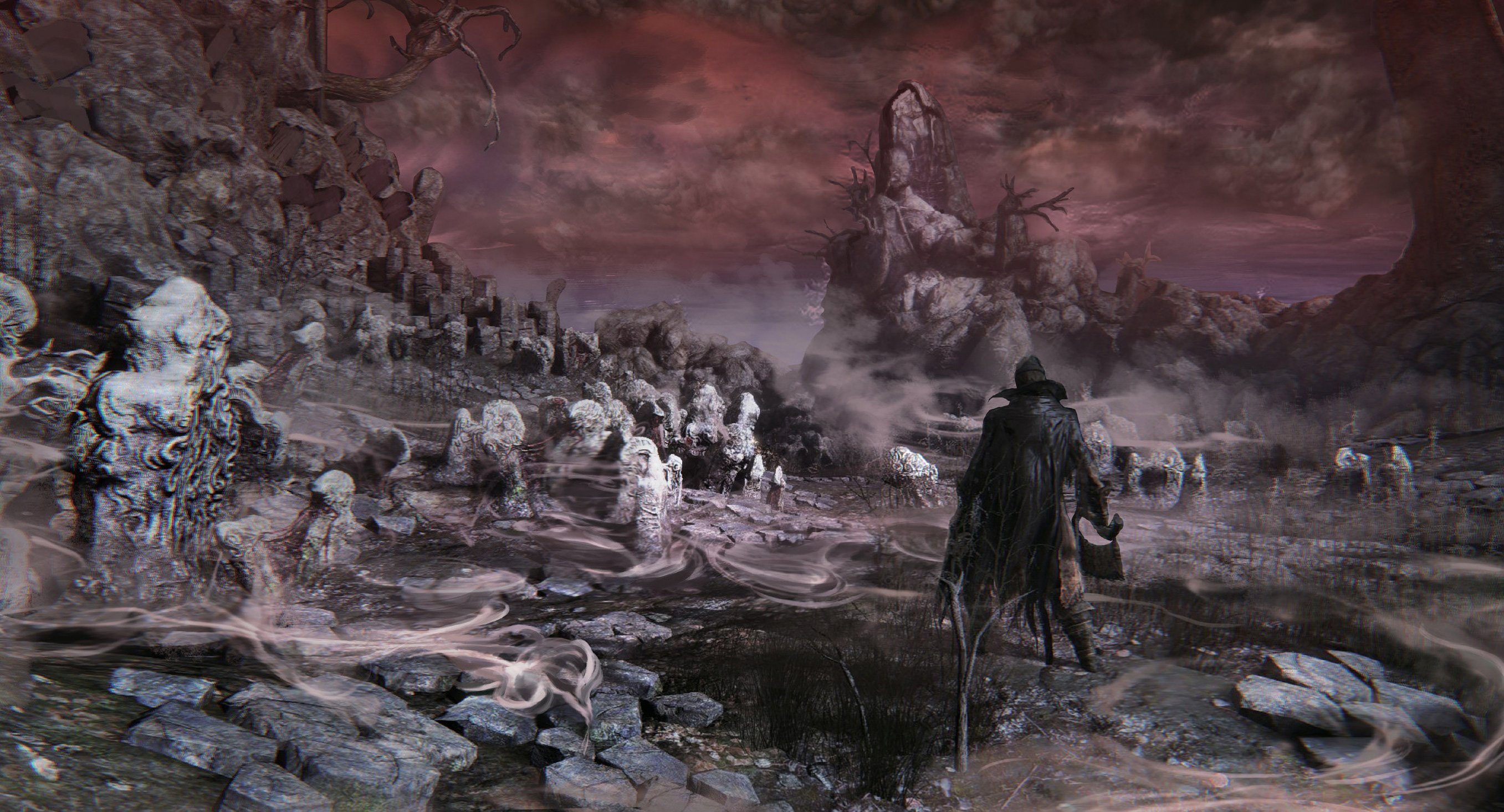 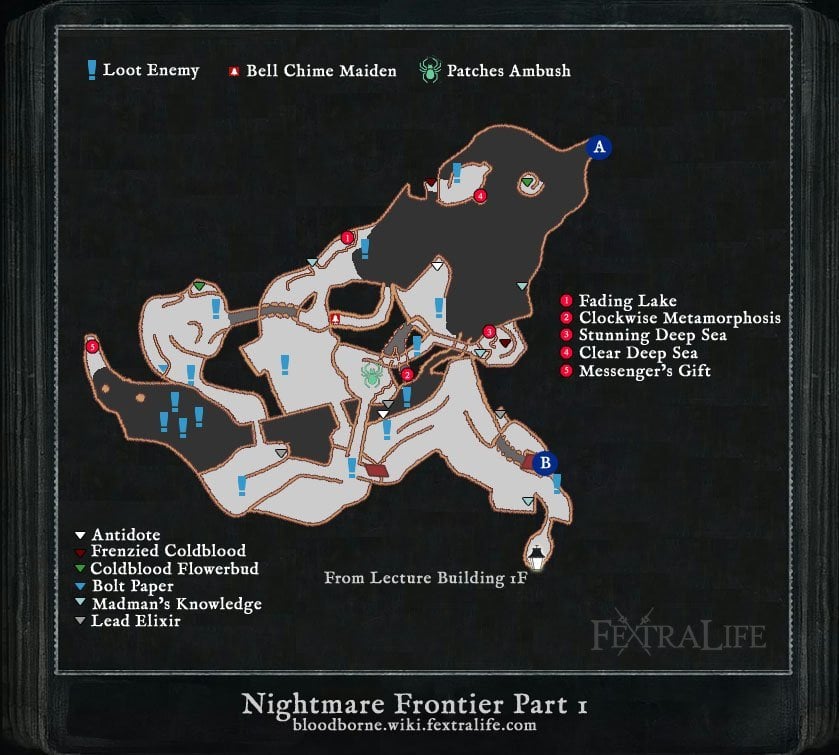 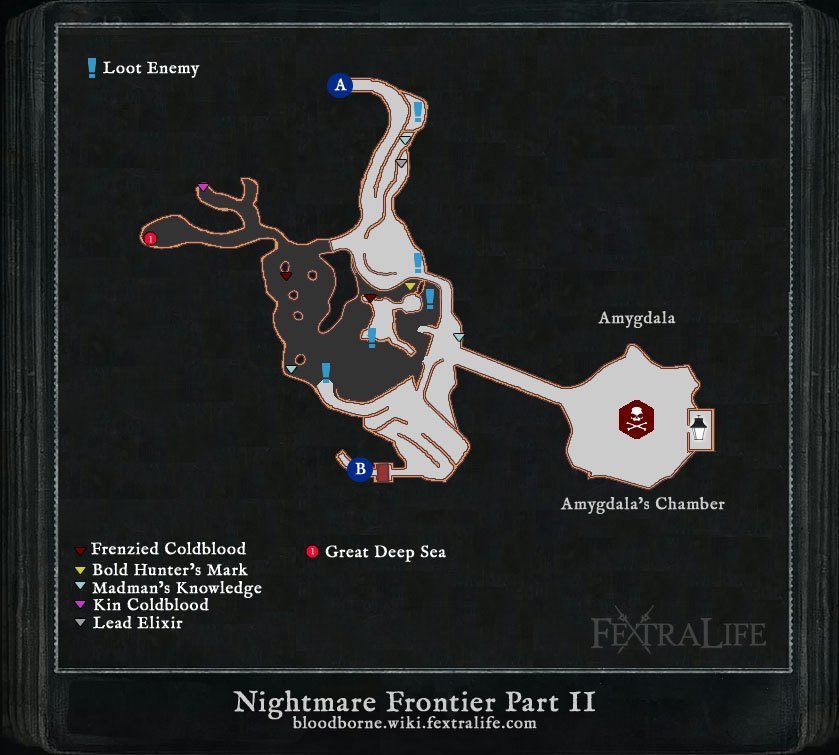 Upon arriving, the player finds themselves in a cave with a lamp. However they cannot return to Hunter's dream at this point because of a Chime Maiden's presence if the bell resonates with a Sinister Resonant Bell. After exiting the cave, you'll notice a ramp on your immediate left, instead of going up it right away, kill the Scurrying Beast hidden to the right of the slope. Advance after killing it. Atop the ramp we see a Silverbeast sitting with its back facing the player, with a Madman's Knowledge hidden on a body on the left. Backstab the beast for an easy kill. Right underneath it, you will find a cave with an elevator shaft - it is a shortcut leading right to the boss, but cannot be accessed at the moment. 2 Lead Elixir can also be found on a body here. 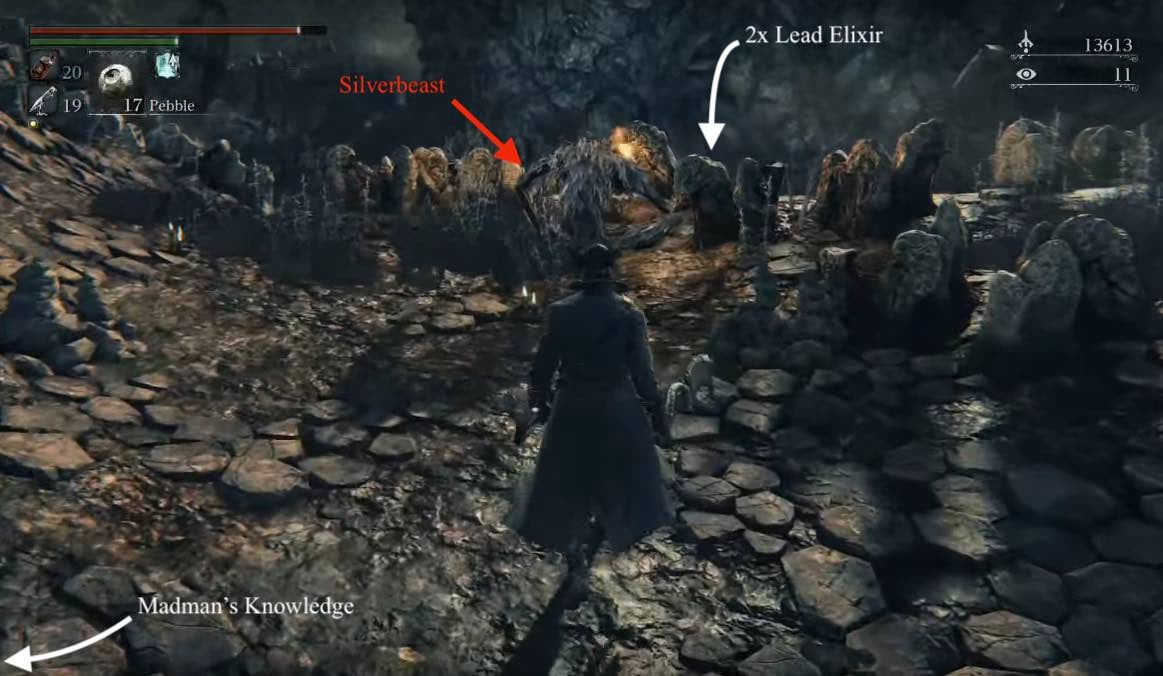 When advancing further, stick to the right ledge and you will find another Silverbeast sitting near the ledge and a Large Wandering Madness right next to it. Try to kill the Large Wandering Madness as soon as possible before the other gets a chance to attack you(Dropping down into the swamp here allows you to obtain the Messenger's gift. This will be elaborated upon at the end of this guide.). Advance and you will see yet another Silverbeast sitting with its back facing the player. Exploit this again. You may miss the Wandering Madness on your way to the Silverbeast if you're not careful, as they blend in with the environment; keep an eye out for Wandering Madness all over the map, they're everywhere! You will then cross a bridge, after which will cause an attack from 2 NPC hunters. 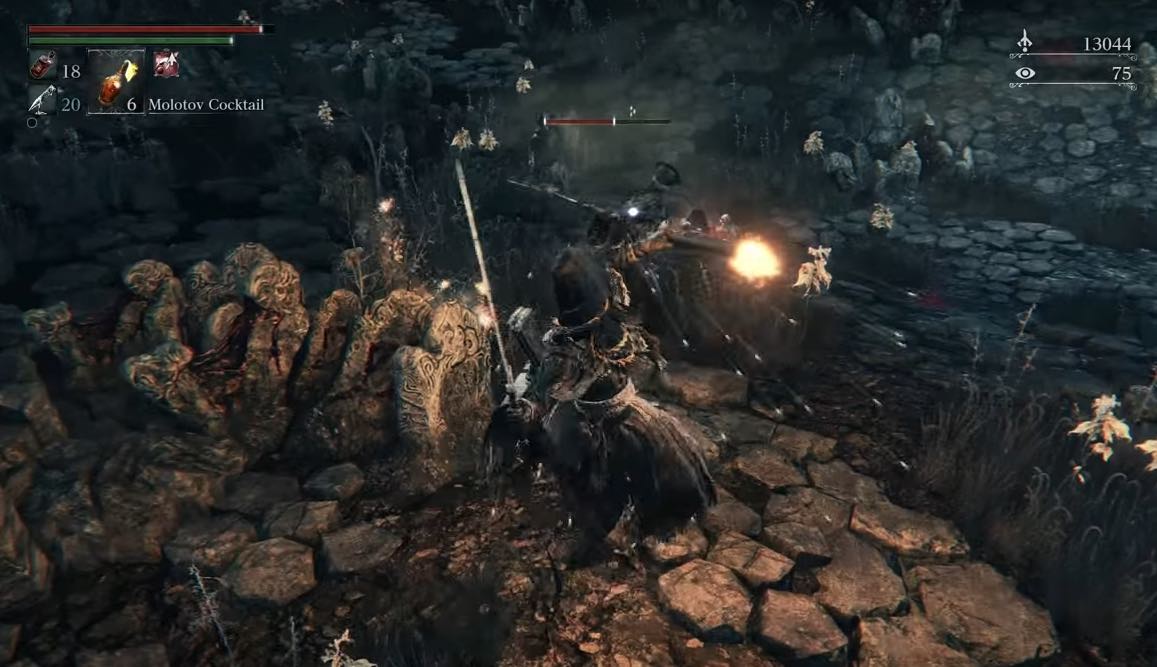 After dispatching them, continue forward until you can walk up the ramp on the left, jump over the gap and obtain a Fading Lake rune. A Madman's Knowledge can also be found below the gap. Advance to the right past the ramp and you will see a branching path, one of which leads to a large poison swamp. If you are playing online, go that way: we have unfinished business with the Chime Maiden. Do not enter the swamp; rather, stick to the right cliff and you will see a blue lantern and an opening on the cliff. Right on top of the ramp you'll find her. Greet her with a backstab-viseceral attack. Alternatively, if you wish to have an easier PvP matchmaking, it is advised to keep her alive for PvP dedicated purpose, especially the opening area right after the lamp is a convenient PvP location.

We may now return to Hunter's Dream. As the next area is much more dangerous, this is recommended if you wish to spend your echoes first.

Both branching paths lead to the boss, but the one on the right is recommended since the poison swamp is huge and there will be Yetis throwing boulders at you Nonetheless, there are a few items (mainly coldblood consumables) in the swamp so it might be worth taking a bit of time and picking them up.

Taking the path to the right and you find yourself in a tunnel with a Silverbeast. However this one is more dangerous as it fights you on all 4s (whereas the other ones stand upright and wield a torch at first). You will also find 2 Blood Vials on a body and a Wandering Madness near the exit of the tunnel. A large area follows, with 3 Yetis throwing boulders at you. Care should be taken if you intend to take them out, as their boulders are deadly; the boulders can still deal damage after crashing for a couple of seconds, so beware of this. Alternately, it's easy enough to run past them since they are slow and do not chase the player. To continue, take the path on the left (the Yeti on the right stands near a dead end), where a Silverbeast can be found. Their boulders can still hit you from here, so keep running or take cover behind a pillar while you fight.

After dealing with the third yeti, you should go through a tunnel and arrive at an area with three branching paths. To the right, is a Wandering Madness and nothing else. The one straight ahead will take you right back to your starting point (near the lamp), note that standing at the end of the tombstone will cause it to fall down and act as a convenient shortcut. To progress further, head left. Look to your right while on the bridge: is our old friend Patches clinging to the wall! As you would've guessed, Patches is no bueno in any Formsoft game, and just as he did in Dark Souls, he'll lure you in with shiny loot and throw you over the cliff in an edgy cutscene. Don't feel too hard done by, you'll get your chance at revenge. 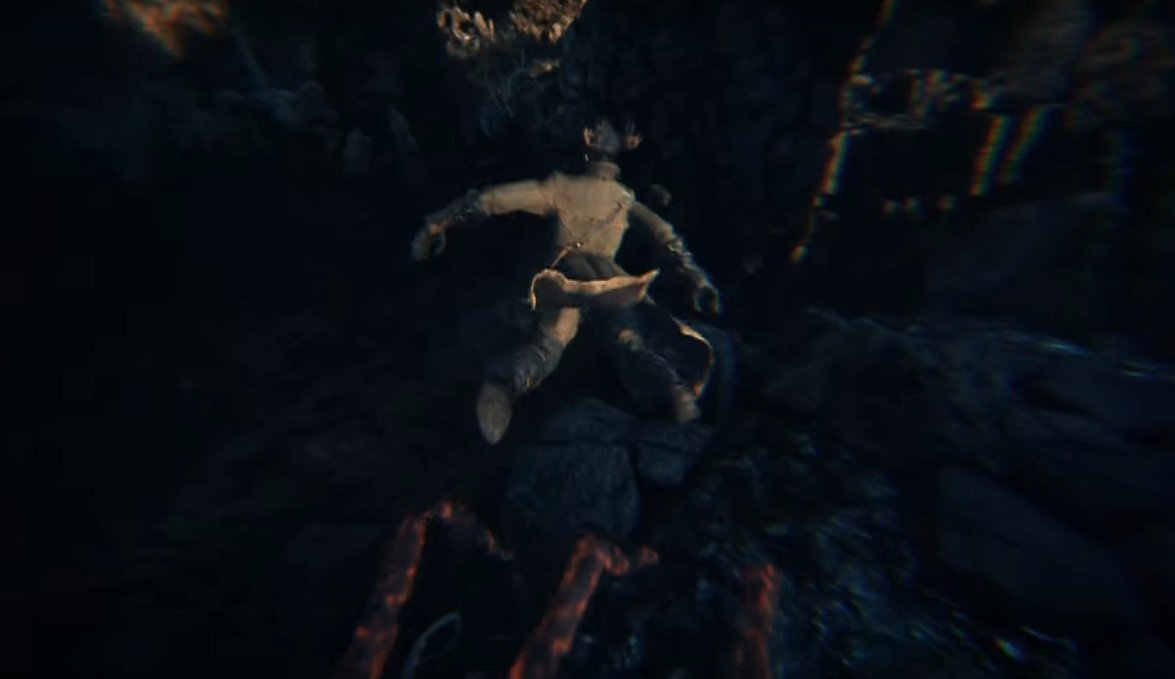 The next step is to collect the gift Patches has prepared for us: a Coldblood Flowerbud. Next, climb up the ramp on the left to pick up 2x Blood Vials and a Scurrying Beast, but do not drop down from there; rather, turn back and enter the tunnel where you can see a Yeti standing near a ledge, who would be terrorizing you should you have walked into the swamp from the beginning. After dealing with him, turn right and go down, picking up 2 more Blood Vials on the way. We will now have to drop down into the swamp. Make sure to equip Antidotes as the swamp inflicts slow poison on you. After picking up a Great One's Wisdom and killing the 2 Parasitic Leach guarding it, exit the tunnel (turn left) into the great swamp and walk towards your right. You will soon see a blue lantern and a Yeti next to it: there is the exit.

Once there, make sure you have your health healed to full. We will come across a Winter Lantern. Here's a few things to note: 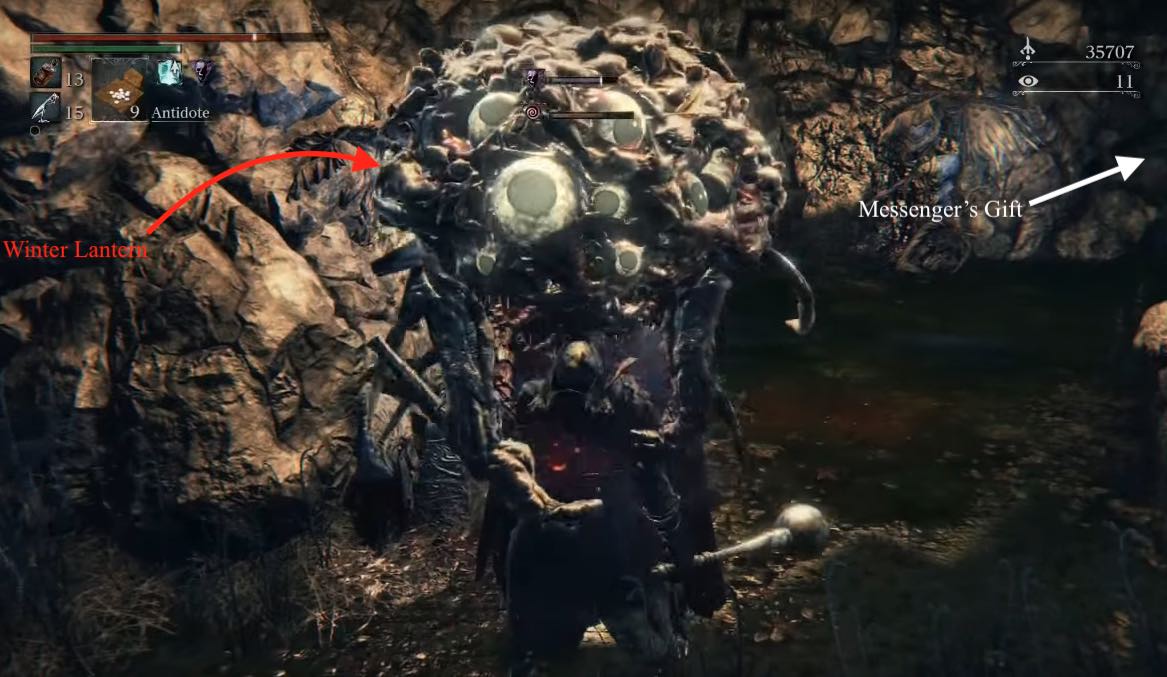 While running past the Winter Lantern is also an option, there is a Large Scurrying Beast hidden nearby, killing it is recommended; it is found by standing at the Winter Lantern's initial location, turning back to where you came from, and look to the lower area on the right. This beast is especially valuable since it drops 2x Blood Stone Chunks as opposed to the Twin Blood Stone Shards like rest of its brethren do. In one of the two passages here, you can find the Messengers' Gift.

Over the jellyfish's corpse we arrive in another large area, with more poison swamp on the right. There are a few Coldblood consumables and a Caryll hidden within the swamp, but before we do that we need to first activate the shortcut mentioned earlier. Go straight ahead, avoid dropping into swamps with fallen stone pillars along the way. Do not turn left onto the bridge where a large building can be seen on the other side yet; that's the boss arena. Keep going straight and we soon come across the last Silverbeast we need to fight, patrolling a flight of stairs which leads to the elevator shaft. Now that we can transit directly from the lantern and the boss arena, that's where we are headed. 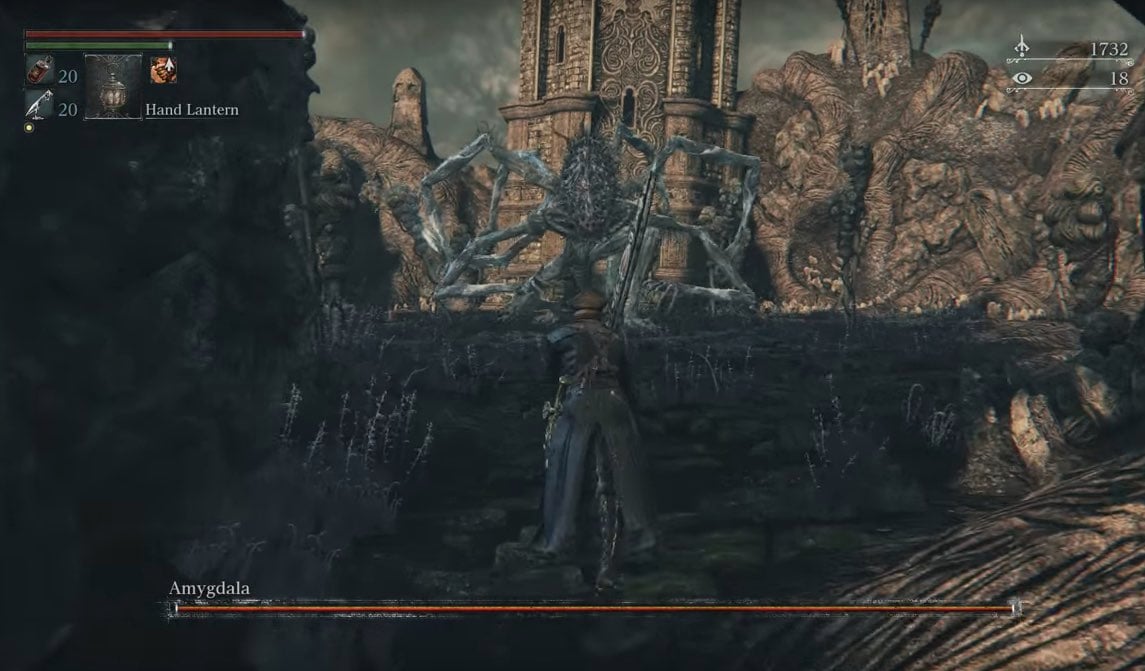