Kirkhammer (教会の石槌 Church Mallet) is a Trick Weapon in Bloodborne.

"A trick weapon typically used by Healing Church hunters. On the one side, an easily handled silver sword. On the other, a giant obtuse stone weapon, characterized by a blunt strike and extreme force of impact. The Church takes a heavy-handed, merciless stance toward the plague of beasts, an irony not lost upon the wielders of this most symbolic weapon." 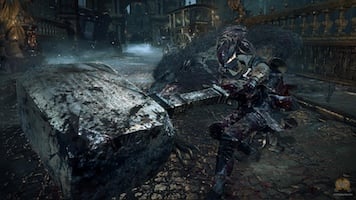