The 1st Floor Sickroom is where the player begins their journey as a hunter in Bloodborne. The player wakes up on an operating table to find the place nearly deserted. You will later revisit the area, and it will be called Iosefka's Clinic

Items in back entrance

After the cutscene, you are prompted to name and customize your character, see Character Creation for help on with this. When you are done a 2nd cutscene begins. Following the cutscene you are now in control of your character. There is a note on a chair in that room that mentions Paleblood for the first time, read it before opening the door on the opposite side. You will find several messengers on the floor in this building, they give you tips and teach you how to play. Keep moving and you will reach a room with a Wolf Beast, attempt to fight it and if it kills you, you will wake up in Hunter's Dream.

Note: It is possible to kill this Wolf Beast using your bare hands but it will take a while and you will not receive any substantial drop. Dodging behind it and using a charged R2, followed by an R1 attack will usually kill it. You can also run past the beast and up the stairs where you can open the door to leave the clinic. Once the door is open run to straight then make a left toward the gate and open it. After you open the gate you enter Central Yharnam. Next from the gate run up the path and take a left past the second carriage, the gate on the right is blocked. Hurry past the man and look on the left side on the ground for the lever. Pull it and the ladder will drop. Run up the ladder quickly and once at the top Sprint to the lantern, The man will still chase you so light the lantern and use it right away.

Inside the Hunter's Dream you will see a hill leading up to the only building in the area. This hill has numerous messengers on the ground that will give you your starting equipment. You'll have a choice of three Right Hand Weapons: The Saw Cleaver, Hunter Axe or Threaded Cane. Further up the steps you can choose your Left Hand weapon, in this case a choice of two firearms: The Hunters Pistol or Hunter Blunderbuss. Once you have chosen your equipment, head back down the hill to the farthest Gravestone with Messengers at its base. These Gravestones act as portals to each Lamp you unlock throughout the game. Select the 1st Floor Sickroom and you will be taken back to Iosefka's Clinic.

When you return from the Dream, light the lamp and go back up the stairs to the room you started the game in. The door to the room is now closed but there is an NPC on the other side that you can talk to. Iosefka will not let you into the room but she will give you 1x Iosefka's Blood Vial. Now head back to the room with the wolf Wolf Beast and kill it. In the next room, on the left, pick up the 2x Blood Vials from the body and open the door to exit the building.
Outside, pick up the 10x Quicksilver Bullets by the gravestone and open the gate that leads to Central Yharnam. If you head left you can find 4x Blood Vials. Going right, follow the road around to the left, but be prepared for a Hunter hiding behind the carriage. Deal with him and pull the lever against the wall to drop the Ladder. Don't climb it just yet, continue up the road to find two more hunters sleeping on the floor. Kill them and smash through the crates in the corner to collect 6x Molotov Cocktails. Climb the dropped Ladder and light the Lamp of Central Yharnam.

Iosefka's Clinic
The locked gate on the right when exiting Iosefka's Clinic is unlocked by progressing through the Forbidden Woods and also allows the player to access the back of Iosefka's Clinic. To access this locked area, waken at the Forbidden Woods and head straight until you reach the town area with the dog cages on the left side. After you kill the dogs, there is an obscured path off to the left which leads to a cave. In the cave, there will be a poison swamp and some giant enemies that you must traverse to reach the small passage with the ladder that takes you to Iosefka's Clinic in Yharnam. Once here, you may unlock the gate and head to the back where there will be a Celestial Host. After killing it, climb the ladder to the roof and kill the carrion crows. Now, enter the open window into a hallway in the back of Iosefka's Clinic. If you sent any NPC's to Iosefka's Clinic, you will find them as docile Celestial Mobs which drop some items. If you turn right, you can open the door to the main clinic room where you will find the Cainhurst Summons key item, which allows the player access to Castle Cainhurst. If instead you turn left in the hallway, you will find some items in a room, as well as a separate corridor area where the player will encounter Iosefka who warns the player not to approach. If the player approaches, Iosefka will become hostile and the player will not be able to speak to her from behind the double doors any longer. If the player enters this area after the Red Moon event has been triggered by defeating Rom, the Vacuous Spider, Iosefka will instead be found in a non-aggressive state on a table. Killing her now will cause her to drop a One Third of Umbilical Cord consumable item. 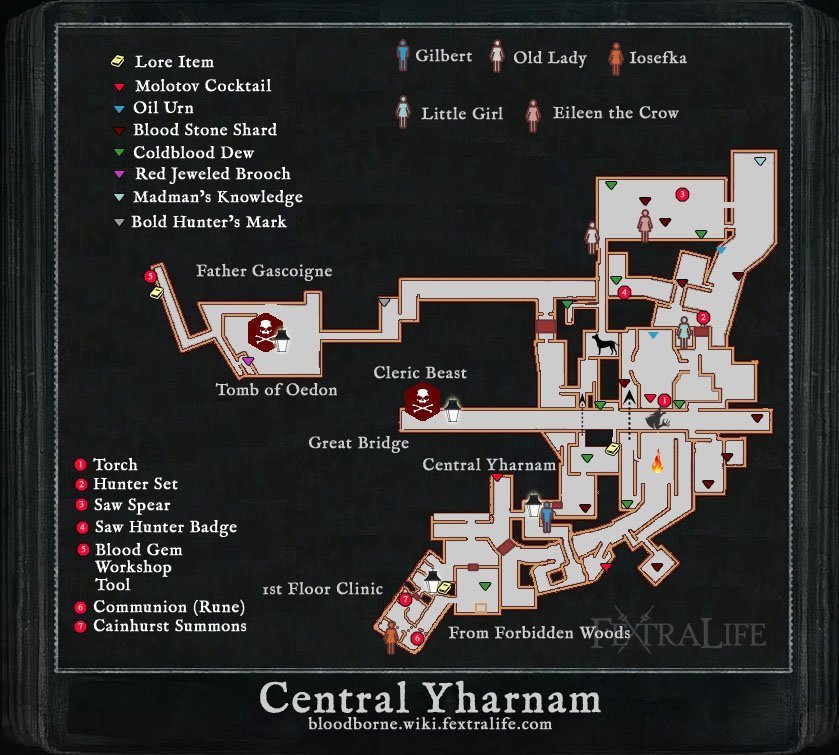