Watchdog of the Old Lords is a Boss in Bloodborne. It is a large hound looking creature that is on fire. It was seen in the Chalice Dungeon gameplay video, and currently can only be found within Chalice Dungeons.


--Easy Cane Whip (Whip Mode) Technique for Defiled Chalice Level 2 (By FalseShadows)--: The key is to stay close so as to only trigger his single sweeping bite attack. Watch out for the attack, evading accordingly (Backing a step or two should be enough, no need to jump backwards), as soon as the attack animation is about to finish (bringing his head back to normal position), do an R2 attack and IMMEDIATELY take 2 sidesteps to the right as he will do his Charge Attack.The Charge attack should miss and the lock-on might be disengaged. Face him, lock-on and close the distance right away and repeat the attack luring. This is a guaranteed hit to the head everytime if the distance is managed correctly. As you are approaching 40-50% HP mark, you will injure his head, marked by "heeling" of the enemy. This is a Visceral Attack opportunity, so be sure to line yourself well against his head to trigger it. Notice that injuring its head increases the damage of succeeding hits dramatically. After this is where things start to get dicey. He will do a Flame Burst attack, which you can avoid by backstepping twice/thrice depending on your position in the arena; after the attack, he will start to move faster. The luring method is pretty much the same, except the enemy will start to chain his Sweeping Bite attack up to 3 consecutive strikes, depending on how close you are. You can still aim to hit after the first Sweeping Bite, but should the dog chain his bites, your attack will miss and you have a small window of time to backstep or risk being hit by the succeeding bites. Luckily, the chaining of the bites are slow, so if you miss the first strike opportunity, evade the second and third sweeping bite and R2 strike as the third Sweeping Bite (The upward sweeping one) animation finishes and the attack should hit the head as normal. Remember to double/triple backstep once he starts to cue his Flame Burst (he changes his stance) he seems to do it more often as he is near-death. Repeat luring as soon as the Flame Burst finishes. He should be down in no time without you taking any damage. (Done at Lvl 127 with 35 Vit, 50 Skill and a +10 Cane Whip.)

--Holy Blade+9 and Evelyn+9 strategy (by Mr. Fluffybottom)-- This strategy yields the quickest damage that I've found (high skill + bloodtinge preferred). Lock on and stay in front of him. You will be focusing on his head. Keep Ludwigs Holy Blade in 1-handed mode for quicker attacks. Bait his biting attacks, paying close attention to whether he is doing a single or double bite. Wait until the last bite and dodge-step forward and strike him once in the head with the holy blade. Backstep out of range and repeat. If you're quick enough and have his animations down you can usually hit him once before the bite begins and again when it finishes. In between bites he will occasionally try to pepper you with small fire blasts from his claws and mouth. Backstep repeatedly to avoid these and then return to baiting his attacks. He will also occasionally vomit up a puddle of magma. As he begins gagging you can rush in and hit him a couple times before backing off. Be mindful of the puddle's location afterwards as the damage and stun-lock from it will wreck you. If you have enough phys%-up gems on your holy sword you should be able to break his head in time for stage 2 by focusing solely on it. When this happens he staggers. Hit him no more than 2 times and back off. He will do an AoE attack upon stagger recovery which can easily one-shot you if you get too greedy. He will now take increased damage from all attacks on his head.

Upon entering stage 2 (~70%HP) he will erupt flames from his body and become more aggressive. His bites will often be a 2-chain instead of a single so watch for the telltale movement before approaching for a hit. In addition, he will begin including a 3rd bite attack occasionally where he will snap forward at the player in a diagonal motion. This always goes to the player's left, so sidestepping to the right as it happens allows for 1-2 hits before he pulls back. His pepper breath attacks will happen more often now and include more hits, so watch yourself. Additionally, he will begin using is AoE attack occasionally instead of just when staggered. Backpedal when you see the cinders swirling around him or die. Finally, when he approaches stage 3 he will begin using a charge attack (the same attack he likely opened the fight with). He announces this by stopping, spreading his legs, and roaring. He then swings his head down and lunges forward. This is a do or die moment for this fight. You can avoid this by sidestepping to the right in the moments before impact. If you dodge too early he homes in on you. Alternatively, you can take these charges as an opportunity to parry if you've broken his head already. Pay close attention to his movements when he sets up for the charge. As he roars and brings his head down there's a slight pause where he tightens up his legs before lunging at you. As soon as he begins to lunge after this you can shoot him in the head to parry. He will fall to his knees and be vulnerable to a visceral attack to the head. Whether you dodge or parry is up to you and how comfortable you are with your timing. If you miss the parry the charge may easily one-shot you or leave you with a sliver of health at most. High risk, high reward. Alternatively, for Arcane users, once he has 50% HP left, spamming A Call Beyond combined with Bloodbullet will make this fight almost trivial.

Finally around 30%HP he enters stage 3. He erupts flames again and speeds up all of his movements. He will become extremely aggressive and begin charging more often. He will also begin using a more powerful AoE more often. It has more range than before. Backpedal as far back as possible when you see him charging it up. Being near the center WILL kill you. His bite chain will always be 3 hits now and he will tend to use his fire blast attacks more often. They will have increased range and duration so be wary. At this point in the fight it may be wise to focus on shooting his head when he's walking towards you if you have any bone ash. This will speed up the last portion of the fight up. Beyond that, just keep peppering him with hits in between his attacks and you should be victorious. 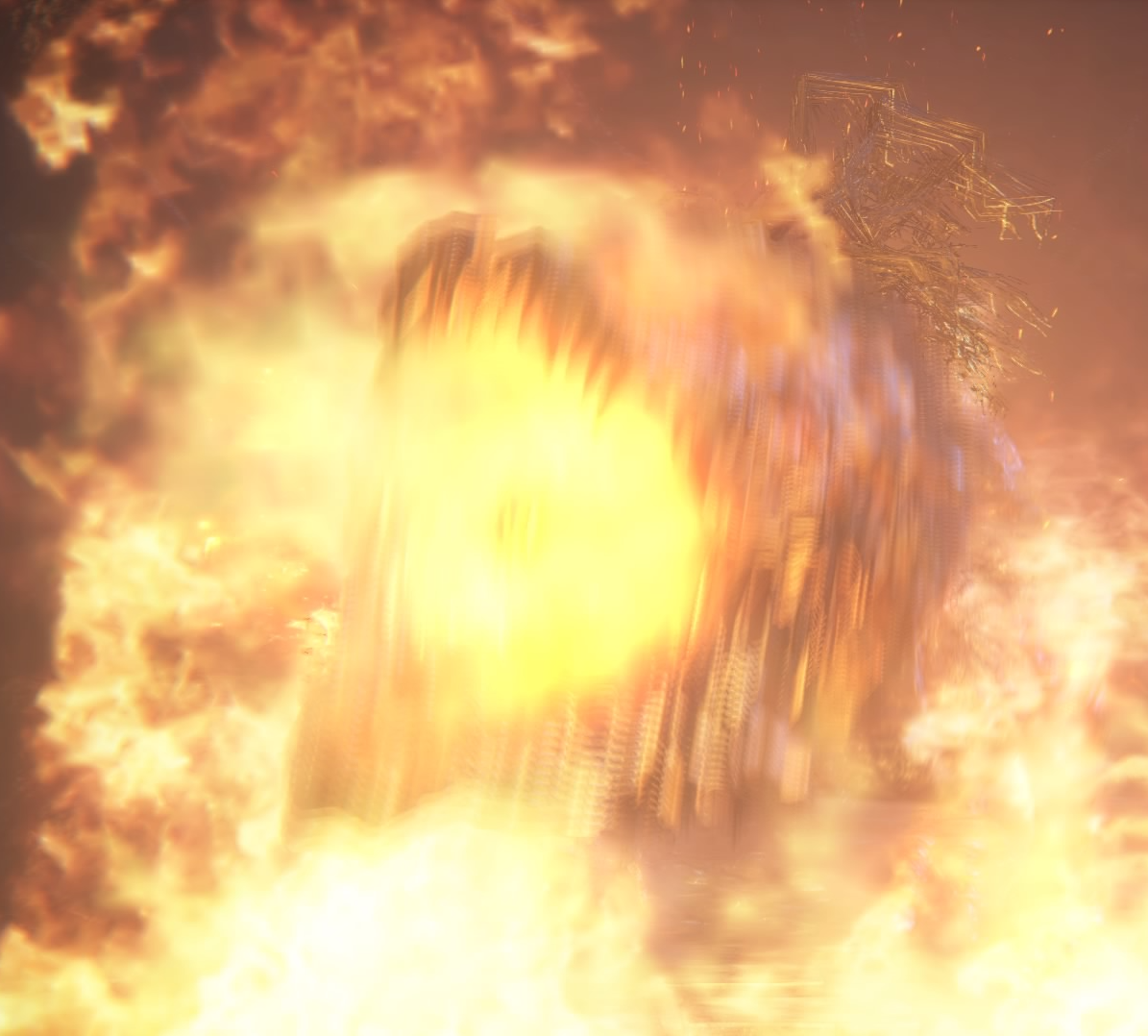 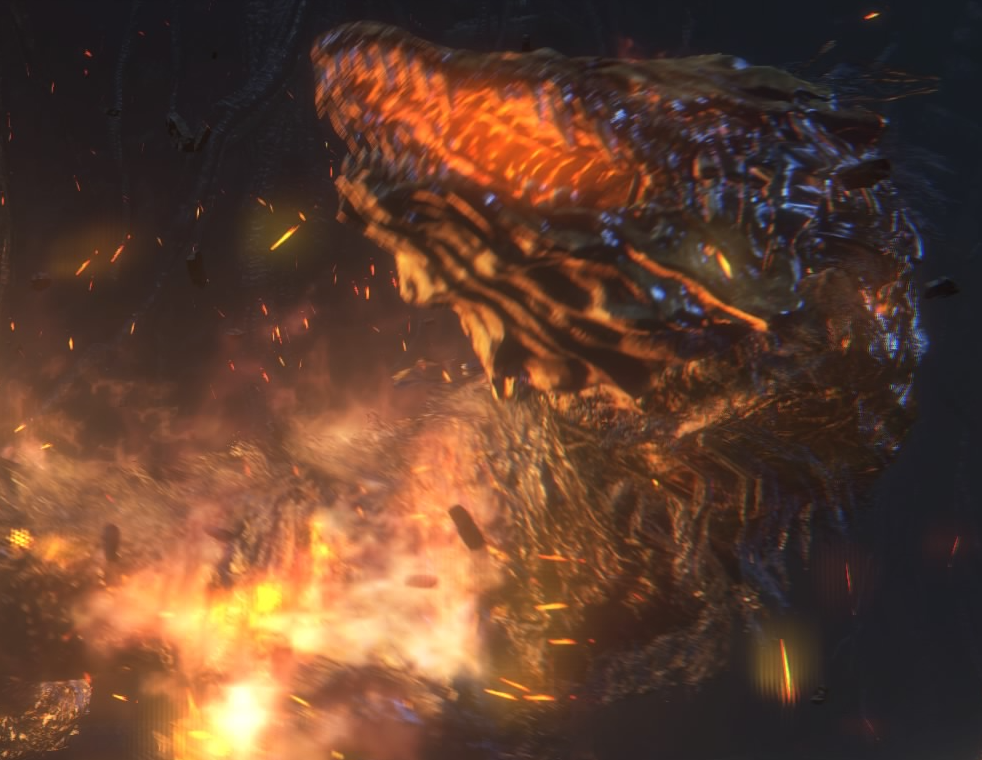 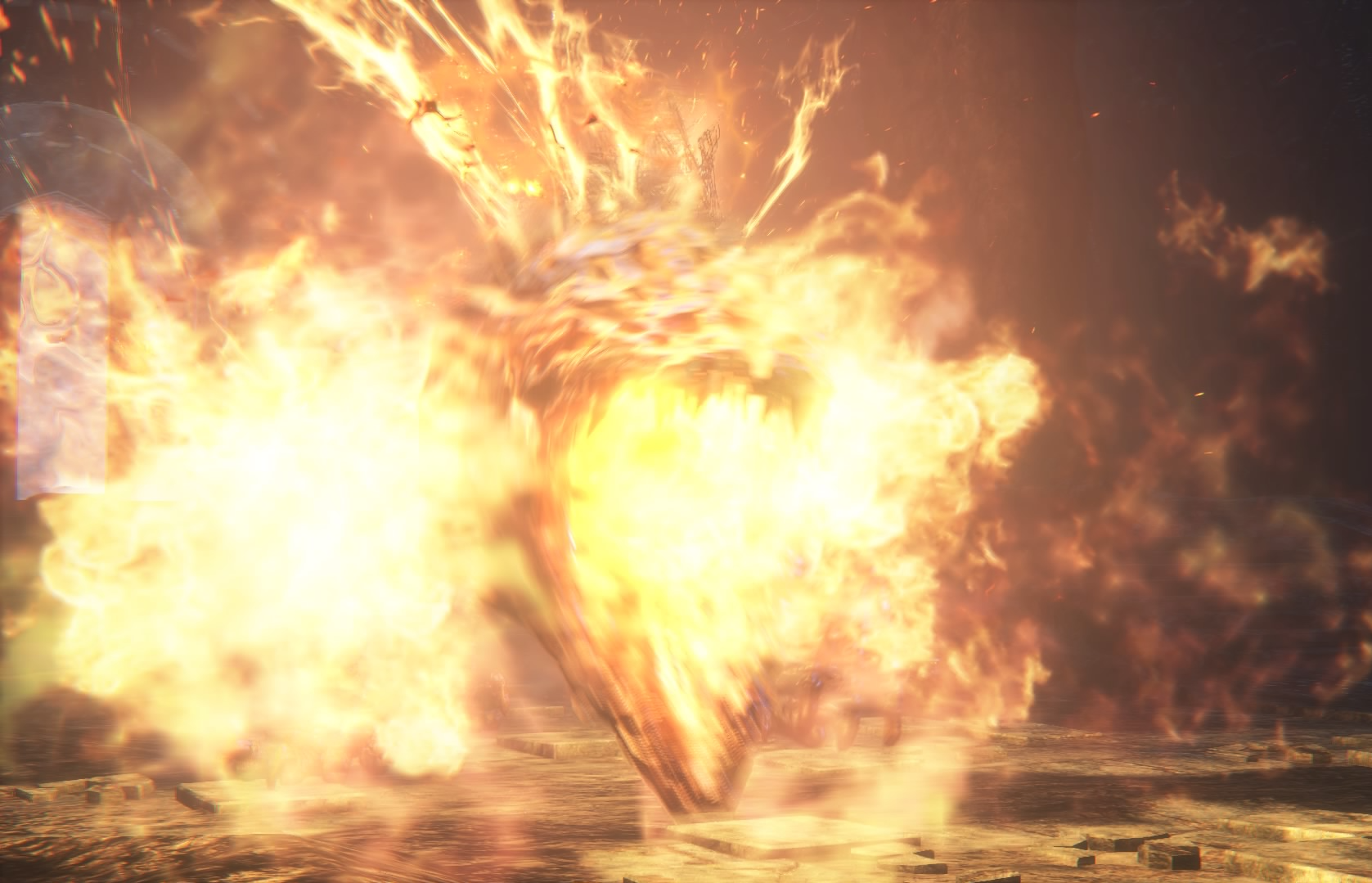 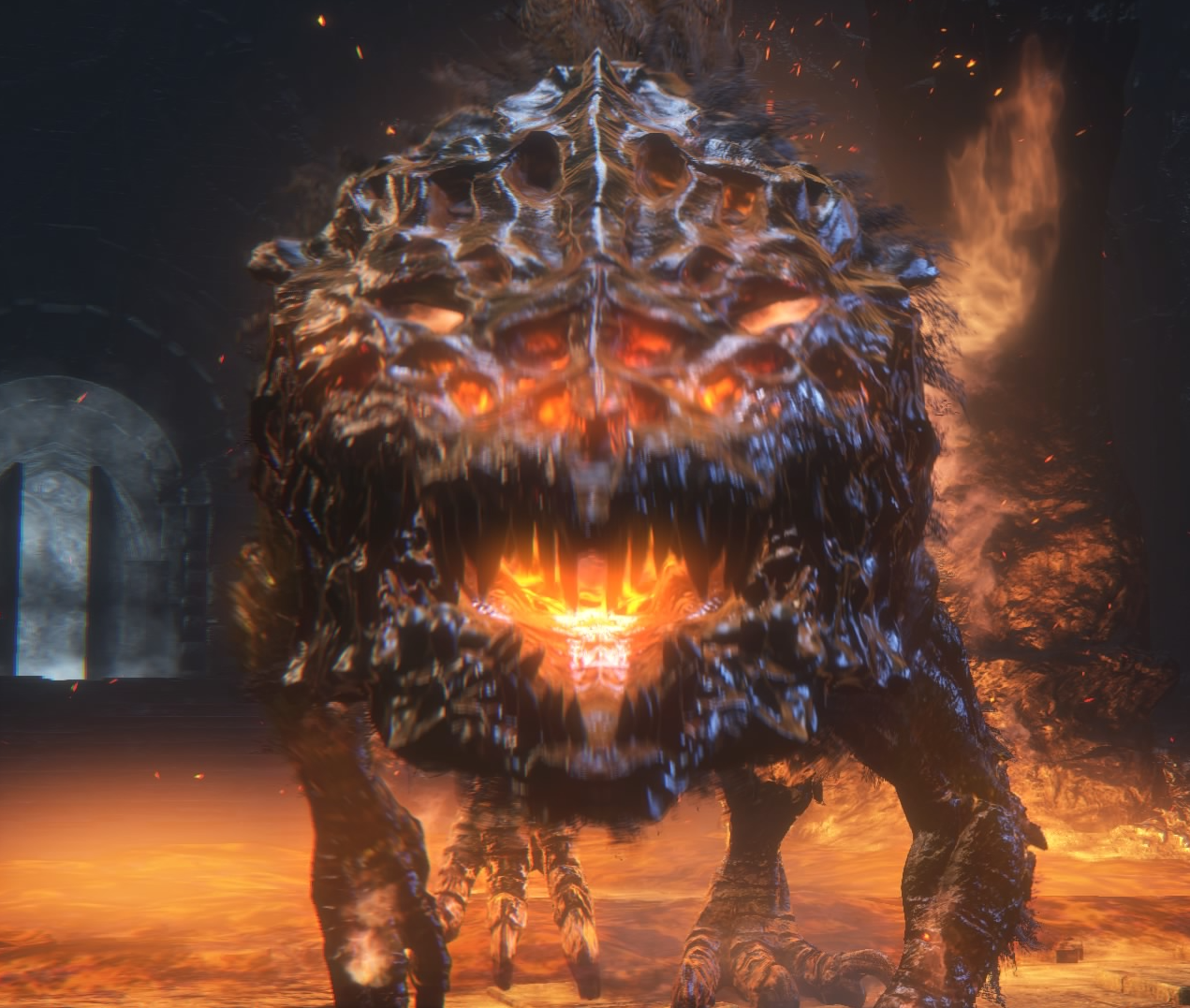 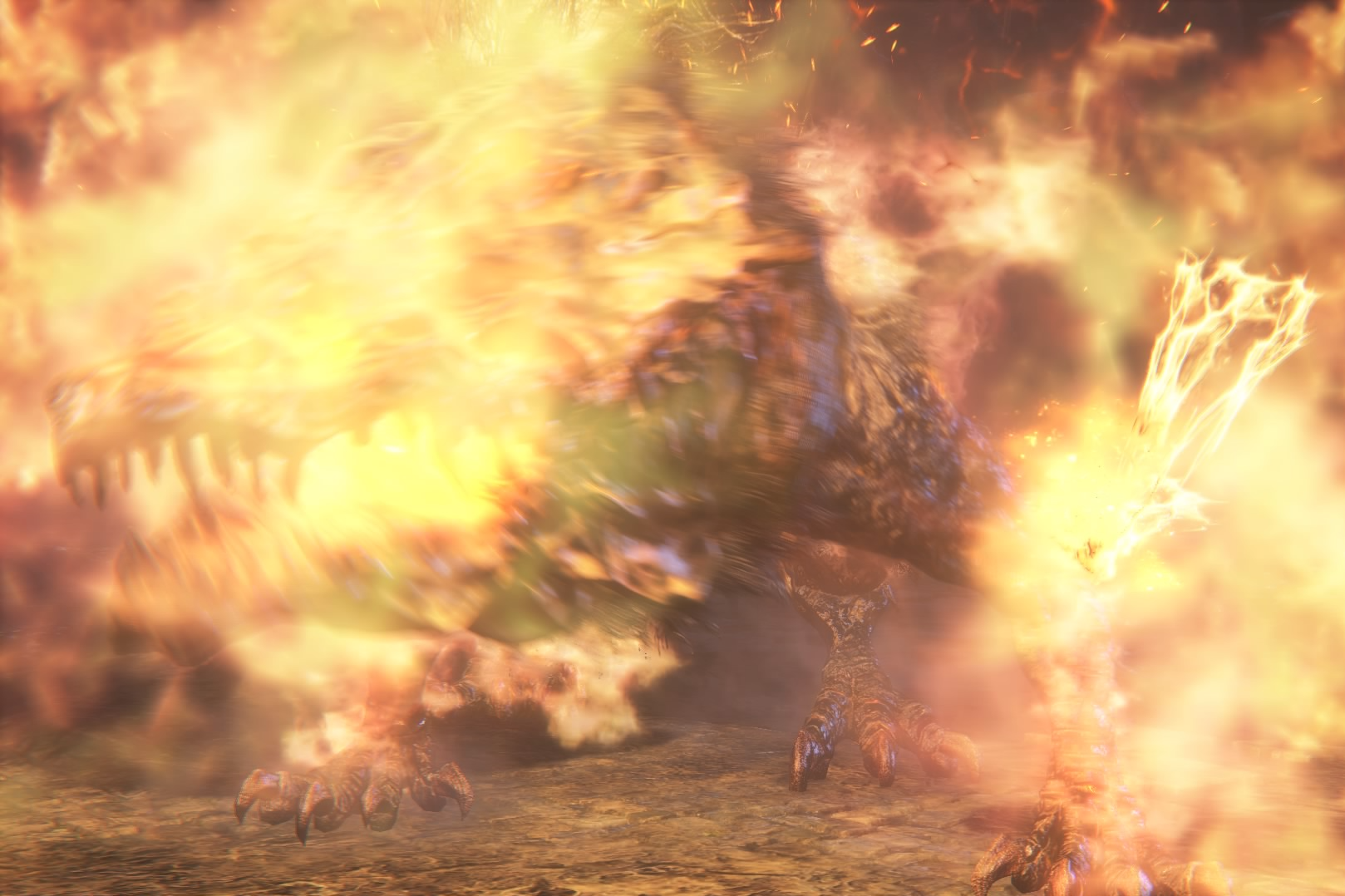