There are three (known) different endings available for Bloodborne. The endings will depend on whether or not you accept the decision given to you at the very ending of the game. Choosing Submit Your Life will unlock the first ending, while Refuse will unlock the other two endings, which will be chosen depending on whether certain criteria were met. It is worth noting that no matter which ending is chosen, you will be thrown directly into New Game + when the credits are over.

After completing the Nightmare of Mensis. The player may travel back to the Hunter's Dream, and proceed to follow the path behind the tombstones, that are normally used to transport the player to various lamps around the game. Continue through the gate, and Gehrman, The First Hunter can be found at the top of this flowered hill, on the left.

SPOILER WARNING! This page contains spoilers for the end, or near-end, of the game. You have been warned.
Most of the information here is speculation, if you want detailed explanation of the lore in Bloodborne visit the lore section of the wiki.

The first ending in Bloodborne can be obtained by accepting Gehrman's offer.

When the player accepts/submits to Gehrman, he says "Farewell, my keen hunter. Fear the blood." With this, a cutscene ensues where the player is shown to turn around and kneel over. Gehrman stands up and puts his scythe to your neck, and with a swift cut decapitates the player. After a moment, the player is seen waking up with the sun having just risen and bells ringing in the distance. The Plain Doll is shown to be near what is most likely the player's grave, praying and saying "Farewell, good hunter. May you find your worth in the waking world." With this, the player obtains the "Yharnam Sunrise" trophy and the credits roll. 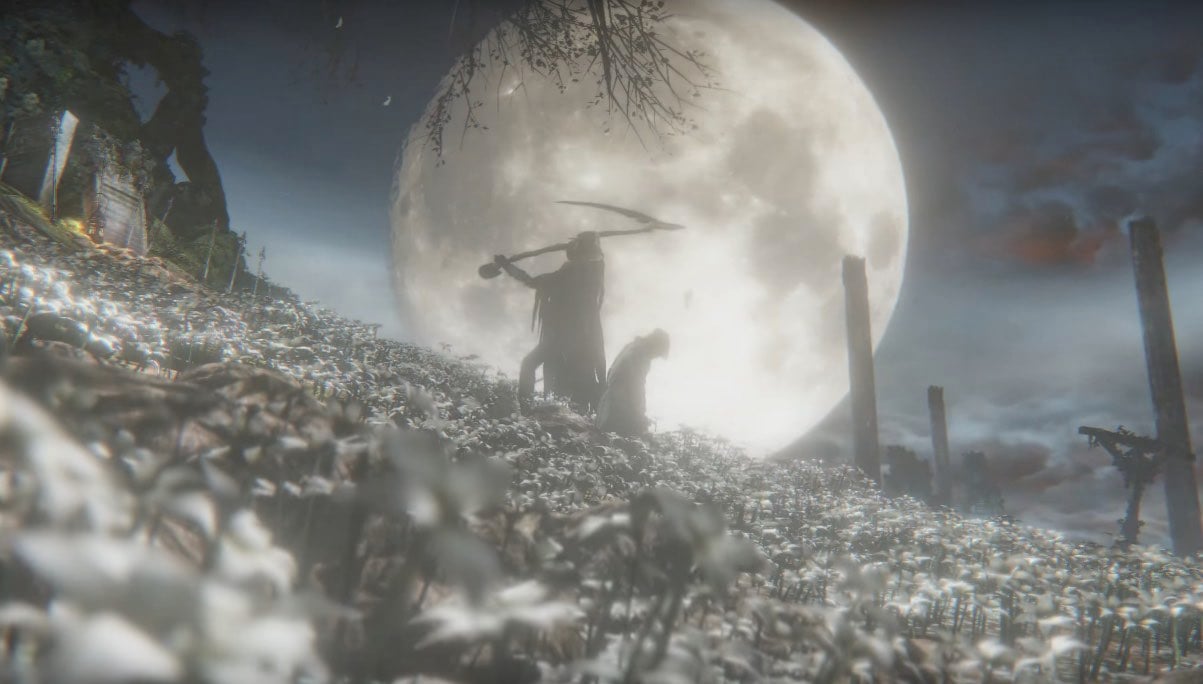 This ending heavily points to the idea that the entire game of Bloodborne is nothing more than a dream. When the player accepts Gehrman's offer, the death is a sign of the player waking up from his or her dream.
However, which one is dream and which one is reality is still debatable:
1. The Hunter's Dream is no more than a dream, Gehrman is indeed freeing you from the dream, and the player awakes at reality.
2. This can also be the opposite, the sunrise is the player's dream, which means the Hunter's Dream is actually the reality, and "awakening" is equal to an eternal death. Gehrman's intent could actually be preventing the birth of the Great One.

The second ending in Bloodborne can be obtained by refusing Gehrman's offer. Once the offer has been refused, the player cannot later accept the offer: the first ending is locked off. This ending cannot be achieved if the player has consumed three or more One Third of Umbilical Cord items over the course of the game, as consuming these items triggers the third ending.

When the player refuses Gehrman, he says "Dear oh dear, what was it? The hunt, the blood, or the horrible dream?" After this he begins standing up, and afterwards says "Oh, it doesn't matter. It always comes down to the hunters' helper to clean up after these sorts of messes." He then pulls out a curved sword and attaches it to the long handle on his back, exclaiming "Tonight, Gerhrman joins the hunt..." With this, the player is thrown into a fight with Gehrman, The First Hunter. 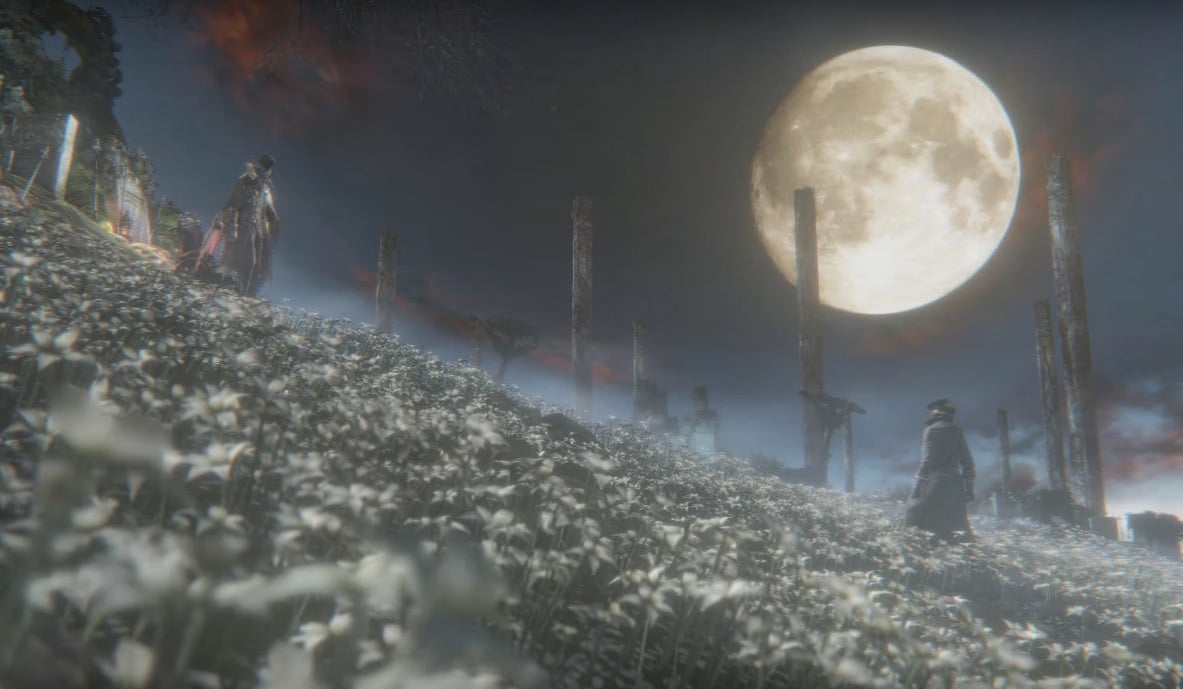 If the player dies to Gehrman during the fight, he says "You must accept your death. Be freed from the night..." However, the game does not then end, and the player will respawn in the Hunter's Dream in front of the headstones. The field of flowers will be obscured by a boss fog gate. Gehrman will be hostile towards the player as soon as they re-enter the arena. The player must defeat Gehrman to end the game: they cannot change their mind about refusing Gehrman's offer.

When the player defeats Gehrman, he says "The night, and the dream, were long..." Upon his death, a cutscene ensues where the player is shown looking at the crimson moon with an ominous figure approaching. The player then slowly walks up to the figure, who then grabs the player and after a few seconds seems to incapacitate the player. After a blackout, the Plain Doll is shown pushing a wheelchair, and as the camera scrolls up the person in the wheelchair is revealed to be the player (as opposed to Gehrman). The Plain Doll kneels down beside the player and says "And so, the hunt begins again." A shot of the sky is shown wherein the moon has just risen. The player obtains the "Honoring Wishes" trophy and the credits roll. 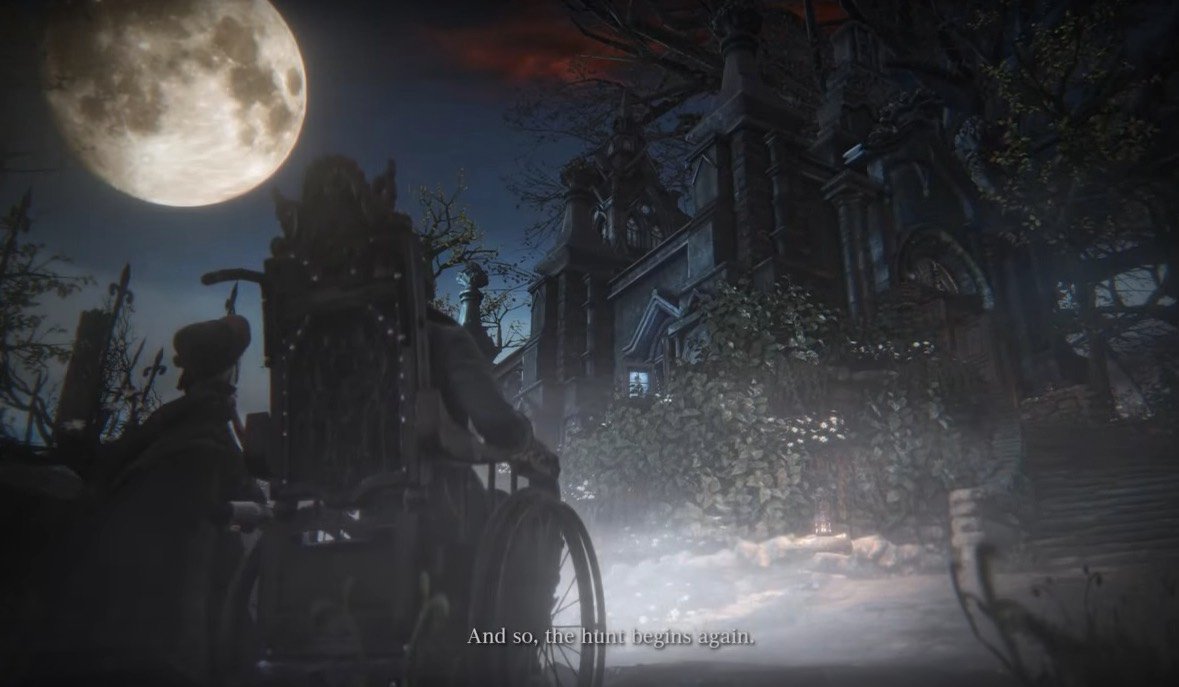 The entity that grabs you may be what the nightmare itself stems from, and the player is shown to take the place of Gehrman as the new watcher of dreams.

The third and final ending in Bloodborne can be obtained by refusing Gehrman's offer with additional criteria being met. The additional requirements are simple: the player must use three One Third of Umbilical Cord. Although there are four possible cords for the player to get in a single run, only three must be consumed. (consuming them is the only condition. It does not matter where or when you consume them, as long as it is before Gehrman dies. This includes consuming them after losing to Gehrman, and even consuming them during the fight.)  Consuming these items means the player can no longer achieve the Honoring Wishes ending. 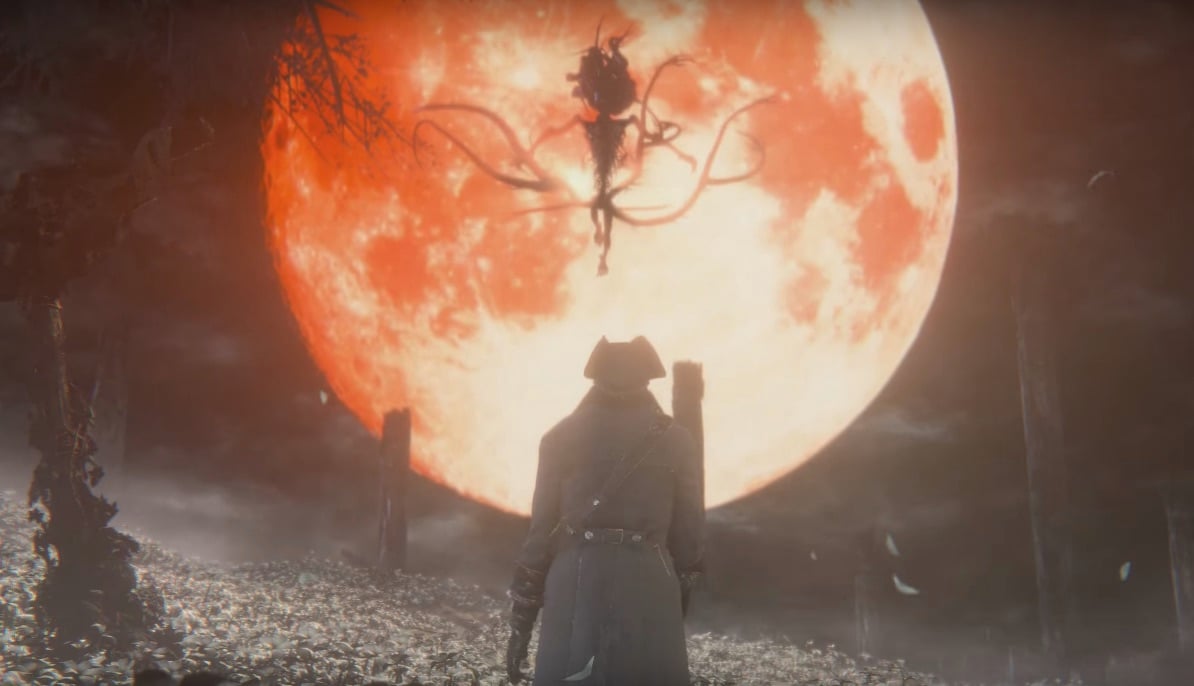 This ending follows the same pattern as the second ending; however, once Gehrman is defeated, when the entity tries to grab the player a shining light appears and the entity is knocked back. The entity, now seemingly enraged, shakes its head and lets out a cry before challenging the player. This puts the player into a boss fight with Moon Presence. If the player dies to Moon Presence, they will respawn in front of the headstones in the Hunter's Dream, like with Gehrman. Once the player has defeated Moon Presence, rather than getting the usual PREY SLAUGHTERED message, they instead get a message saying NIGHTMARE SLAIN. After a moment, a cutscene is shown with the Plain Doll walking up to what appears to be a small slug-like creature whose colors and coat resembles that of the Moon Presence. The Plain Doll says "Are you cold...?" She then proceeds to pick up the slug and, after a small giggle, says "Oh, good hunter," with the cutscene ending and the player obtaining the "Childhood's Beginning" trophy. 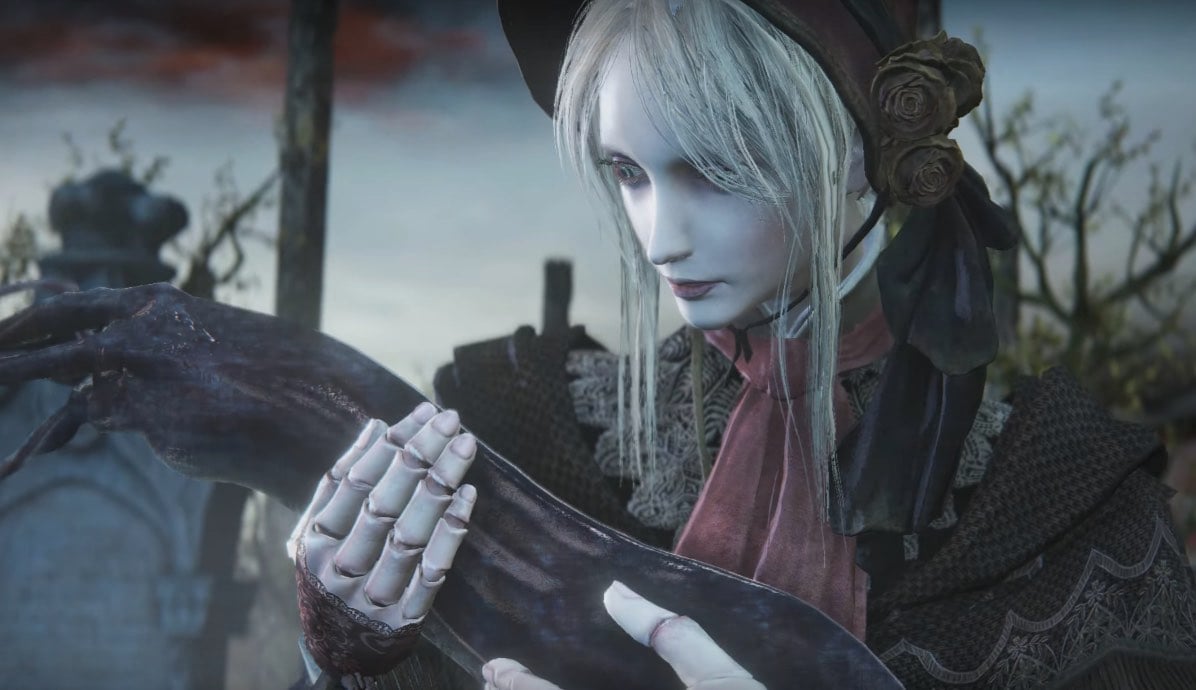 It's worth noting that the trophy title is curiously similar to Arthur C. Clarke's book "Childhood's End", which suggests that human beings may one day evolve past the need for a physical body and become beings of pure mind.

Now that the player has consumed a full umbilical cord, you essentially become a Great One, and so the Moon Presence can no longer do what it had initially planned to do to you and it becomes enraged and simply attacks the player.

Or as with ending the game with the fight against Gehrman, where the player takes his place as the "First hunter," the part where the doll picks up the slug and calls it ''good hunter'' may indicate that the player now assumed the role of the Moon Presence.

P.S. notes in Byrgenwerth have been found that read something like a child being born when a full blood moon hangs low. Later on, in Hypogean Gaol, a note reads "Nightmarish rituals crave a newborn. Find one, and silence its harrowing cry." It is possible that the umbilical cord belongs to the baby born under the full blood moon, however, it is unclear what the baby represents or who was the one that gave birth to it. It also seems to mean that the nightmare wants to kill you because after eating the umbilical cord it then thinks you're the infant and wants to kill you.

There's a way to acquire Gehrman's Blood Echoes, despite having triggered the third ending.

Simply shut down the application during The Moon Presence's Encounter Cinematic. After booting the game back up, you will have acquired Gehrman's Echoes.

This trick can also be used to escape the Honoring Wishes Ending, and trigger the Childhood's Beginning Ending instead.

After booting the game back up, you need to consume 3 One Third Umbilical Cords and reload the Hunter's Dream for the ending to change.