.This page contains lore theories by Rakuyo. Please understand these are musings and interpretations by a player, and are not to be taken as official or representative of other's views. 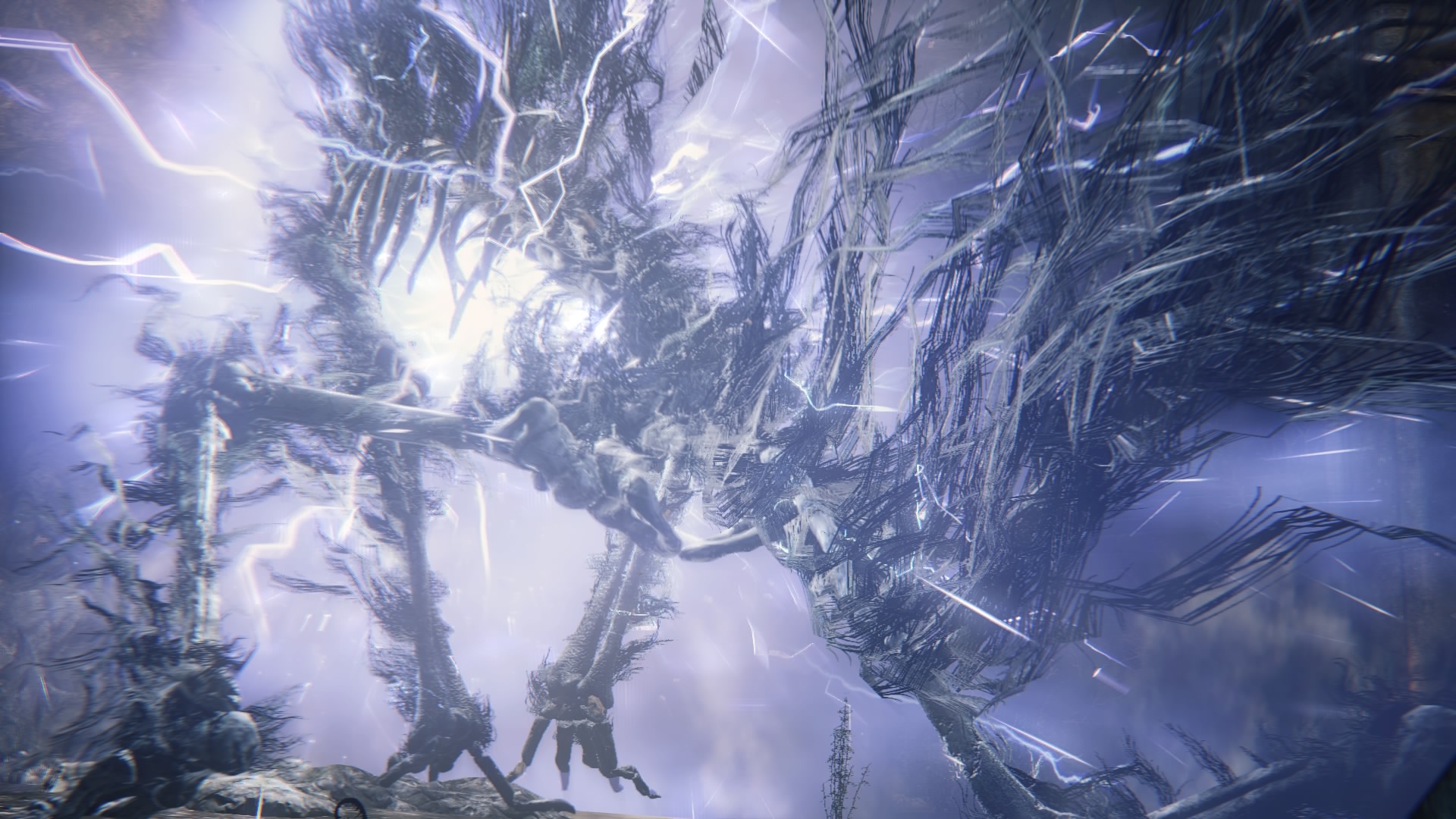 3. The Fake Sky of Bloodborne

5. The Fake Sky of Anor Londo

6. The Blue Lightning of The Black Sun

7. The Power of Humanity

Darkbeasts are a group of enemies typified by abundant screaming, dark/silver hair and an affinity to Bolt.

"Undead Darkbeast" is a term found on Beast Roar and Beast Claw and is analyzed at the end of the page.

Those that played Dark Souls games before have probably noticed a change in Lightning damage, now called Bolt.

In Bloodborne, electricity is blue instead of yellow and it has lost its tight connection to clerics and faith.

" employ pyromancy and Bolt is linked to "Darkbeasts" instead.

This color change appears to be no mere design choice, as Lightning Summoners 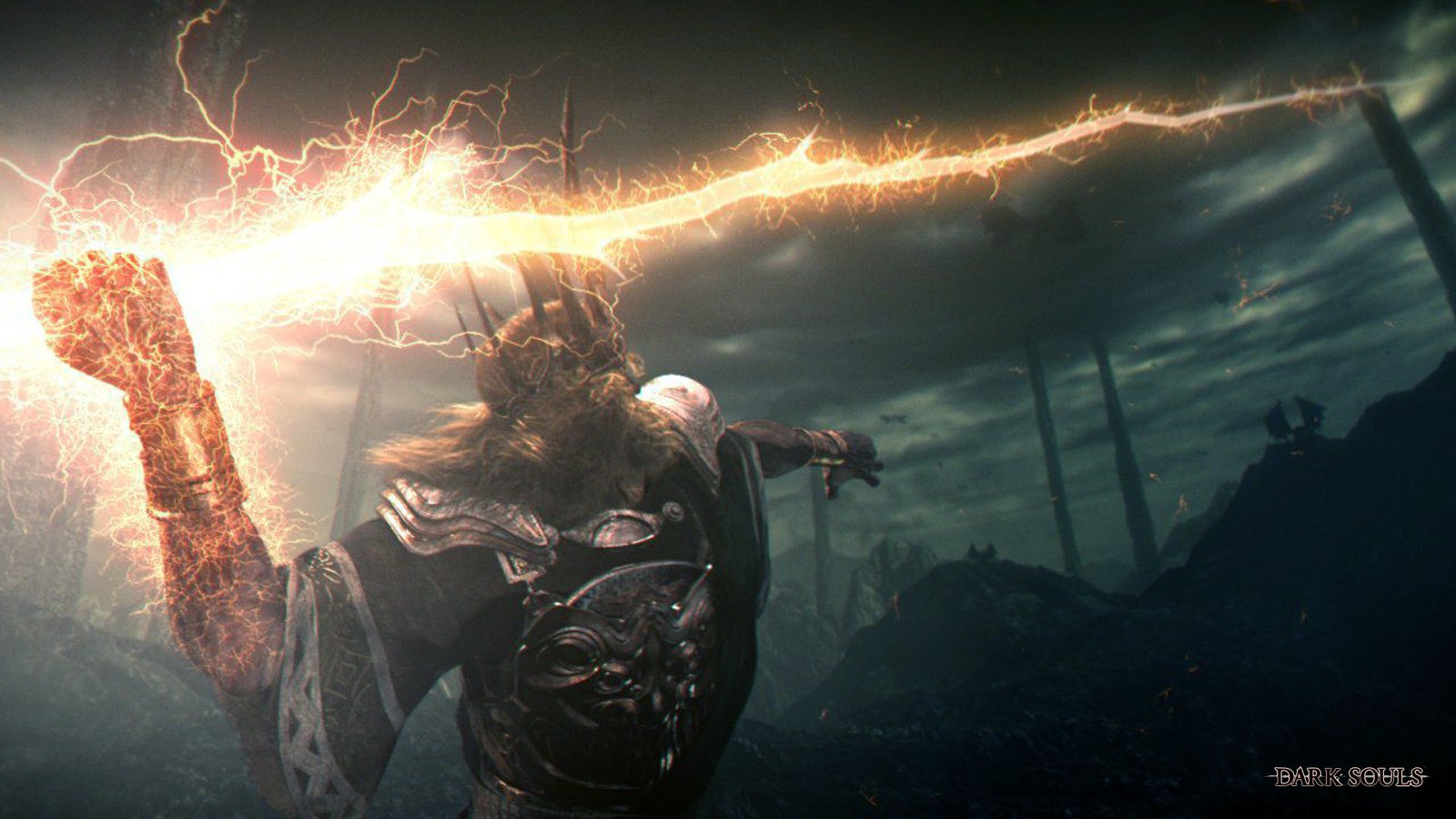 Why did it change? In Dark Souls it is stated that Lightning is not mere electricity but the very manifestation of sunlight.

"In the war that marked the dawn of the Age of Fire, Gwyn wielded these rays of sunlight,
which remains fierce even as they fade." - Sunlight Spear

Gwyn, a Zeus like deity, known as "The Lord of Sunlight" - threw Sunlight Spears, the basis for all Lightning Spear Miracles.

If yellow Lightning first stemmed from the Sun

Here's where things get risky, but I believe that in Bloodborne, much of the visible sky is artifice and that there is no Sun.

If you look at the "Sun

" in Cathedral Ward, an impossible shadow reveals that this Sun can't be a star of our universe.

It isn't the only bizarre anomaly that may be found, even in the pre-Yahar'gul/pre-Nightmare part of Yharnam

Furthermore, the sky has patches that seem deliberately created to appear unnaturally gritty, static and painted on

Bloodborne has an outstanding dev team, so I don't believe this is the result of laziness, but rather part of a dream narrative.

Many more details in Bloodborne, like cloud movement, defy explanation. Videos displaying such effects can be found here.

The Fake Sky of Bloodborne

Well known is that Bloodborne has 3 "Moon Phases

", but these phases are inconsistent across areas.

Touching Laurence's Skull triggers the "Night Phase" in all areas except the DLC, The Labyrinth, and The Nightmare Frontier.

Defeating Rom triggers the Blood Moon Phase, but not so in Cainhurst, Hemwick, Old Yharnam or the Byrgenwerth area.

These areas keep their Night Phase. The Labyrinth

All moons exhibit strange traits, in Byrgenwerth, clouds can move behind the moon, as if it's hanging in Earth's atmosphere

, and in Blood Moon Central Yharnam

The Blood Moon has a different size and color in Yahar'gul

, and in the Hunter's Dream

Such differences in size and appearance aren't limited to the Blood Moon, they appear in the Night Moon as well

Just by moving your character through the Forbidden Woods, you can witness the Moon changing its color and its size.

Near Valtr's hut, the Moon is actually quite large

, but deeper into the Forbidden Woods it appears to have shrunk

Another anomaly is that in the Forbidden Woods, the location of the Moon is opposite to that the pale Byrgenwerth Moon

I believe the Bloodborne universe follows profoundly different natural laws, or maybe the experience is really just a dream.

In our world, a Moon that's bright white or yellow can only be the product of the Sun's rays, but that's not true in mythology.

In mythology, celestial bodies are often independent entities and they are governed by their own laws and/or a designated deity.

, or because they're locked in celestial spheres.

Celestial spheres are circular solids that move around the Earth

Aether was the fifth element, the celestial substance that planets were made from, and which only ever moved in perfect circles.

It's possible that in Bloodborne the Moon is a luminous body in its own right, linked to a deity and subject to peculiar laws.

The Moon Presence, a hidden being which descends from the Moon

Human rituals may "beckon the Moon

" and it's this Blood Moon that's stated to play a role in the Scourge of Beasts.

"The Mensis ritual must be stopped, lest we all become beasts." - Yahar'gul, Unseen Village

, an evil god, adept at shapeshifting.

The Fake Sky of Anor Londo

The idea of the Sun being missing is strange, but From Software has used this idea before, in Dark Souls 1

There, in the monumental city of Anor Londo resided a deity known as Gwynevere, Princess of Sunlight

The player meets Gwynevere, but the benevolent deity turns out to be an illusion

When she disappears, the sunlight of Anor Londo disappears with her

The illusion of the princess is held intact by the only real deity left in Anor Londo, Gwyndolin, child of the Moon

Gwyndolin, known as The Dark Sun, leads the Blades Of The Darkmoon, who hunt down any who tarnish the illusion

His city of Anor Londo has interesting things in common with Yharnam, such as both being gothic megastructures

Other details include two angels

, and a major cathedral

Gwyndolyn could have been a forerunner of The Moon Presence

The Blue Lightning of The Black Sun

This could be what is sometimes called "The Eldritch Truth" the reality that Rom and The Moon Presence seek to obscure.

Those acquainted with this truth can choose to adapt to reality by embracing a new Sun, a Dark Sun

The darkness flowing from this theoretical "Dark Sun" could be formed into lightning, just like the rays of a Sun of Fire.

It only slightly alters the lightning, which is a derivative, giving it a dark blue color instead of the conventional bright yellow.

This Dark Sun may be Oedon, or some alien darkness, but it could also be the darkness found within one's own Humanity. 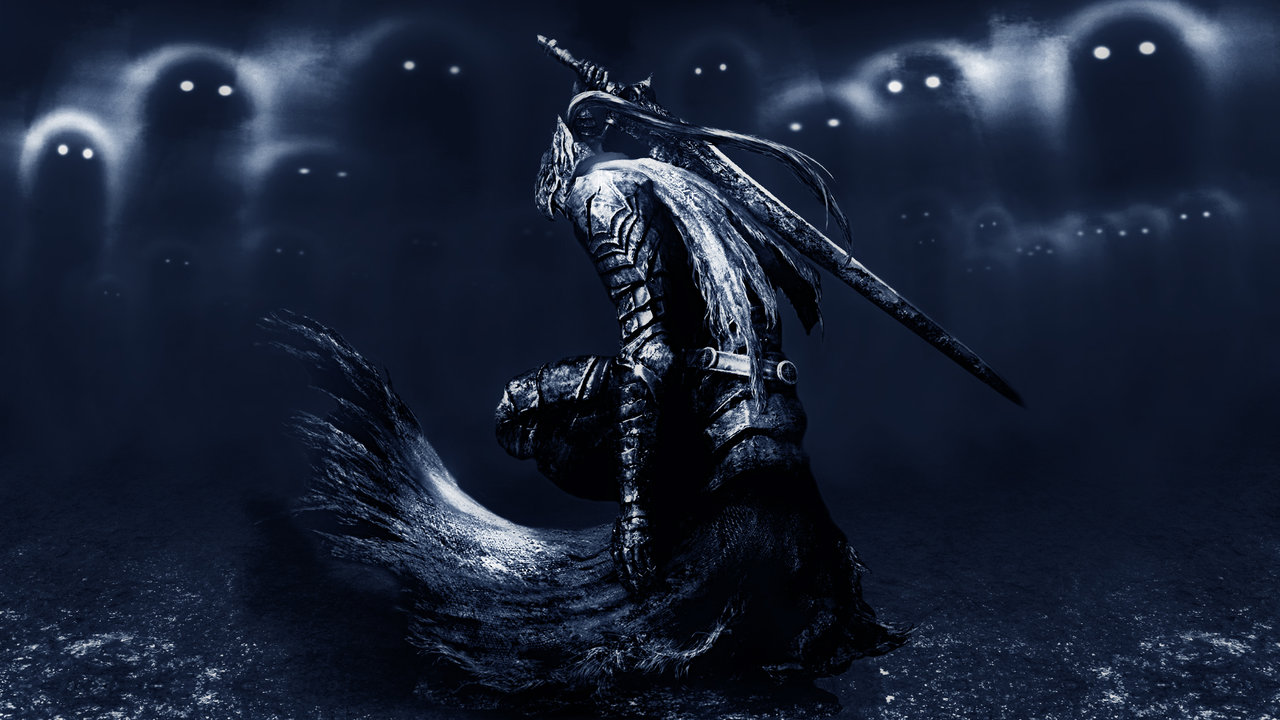 The Power of Humanity

More evidence to support this may be found in Yahar'gul, the birthplace of the Tonitrus and the Tiny Tonitrus .

Yahar'gul is a very dark place. It's the capital of the School of Mensis and their deranged philosophies.

Hunters of Yahar'gul are technologically adept and favor weapons like Tonitrus, Rifle Spear  and Beast Claw .

The Tonitrus itself displays the 3 holes, which may be symbolic of Formless Oedon

The encounter with the Suspicious Beggar reveals that Darkbeasts are intelligent, rational and capable of speech.

The form of the Abhorrent Beast , though feral, is fundamentally human and one can still notice his very human face

. His intelligence may not be at all diminished.

Inherent to Dark Souls lore is the idea that humanity is fundamentally dark, and that we are all to face this timeless curse.

What such human beasts represent, is the ability of that darkness to grow and break the limits of our personal power.

For humans do long for such things, they long for an inner darkness, one strong enough to overcome the constraints of morality.

With such darkness, men may truly become giants, and may even challenge the gods, a conclusion to be feared nonetheless.

"Undead Darkbeast" is a term read on Beast Claw

"Borrow the strength of the terrible undead darkbeasts, to blast foes back with the force of a roaring beast." - Beast Roar

"The long bones of an undead darkbeast... The bones are still alive, and grant a spurt of beastly power."  - Beast Claw

The Beast's Embrace form carries traits that can be "borrowed from Undead Darkbeasts", yet the form has no direct link to Bolt.

It's possible that "Undead Darkbeasts" refers to a larger group of beings than just the Bolt using lycanthropes.

Every Beast in Bloodborne may be in essence a Darkbeast, linked not so much to Bolt, but to the Dark of Dark Souls.

My own theory, which I present under Blood Lore is that The Beast Scourge is actually an outbreak of spiritual possession.

, otherwise found only on Cleric Beasts

Manus is the primordial ancestor of Humanity, said to have let his "Humanity go wild", after which he assumed a feral form

, also seen on Cleric Beasts and the Beast's Embrace form

A monstrous left arm is found on Huntsmen as well

, and Manus' "red eyes on horns" can also be seen on Cleric Beast

of DS2, a goat-headed warlock with wildly grown, gem inlaid horns may have served as a missing link.

The sorcerer led a congregation in Tseldora

. He was, therefore a cleric, and could thereby have inspired the Cleric Beast

Manus was forever in search of his Broken Pendant. Both Cleric Beasts, Amelia

Yharnam's werewolves may be a reiteration of Manus' metamorphosis, the loss of his mind and the "going wild" of his Humanity.

Another Manus trait can be found on Bloodletting Beast, as its awkwardly split back greatly resembles Manus' head

Bloodletting Beast shares the manlike traits of a Darkbeast, and has Abhorrent Beast's signature "stretch punch

Another manlike Beast is Gascoigne

, who also uses the same dark transformation mist as The Afflicted Beggar

Both Gascoigne and Bloodletting Beast have an unexplained resistance to Bolt, which may evidence their Darkbeast kinship.

The Moon Presence, already linked to lycanthropy by its connection to the Moon, could be behind all Beast transformation.

The Abhorrent Beast Gallery is available on a different page, here. 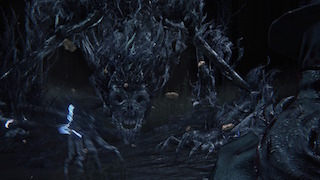 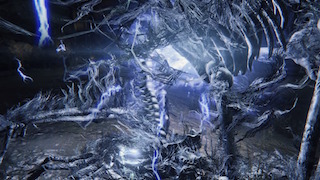 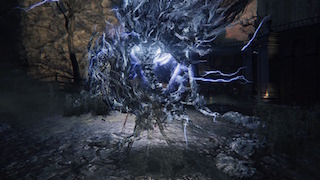 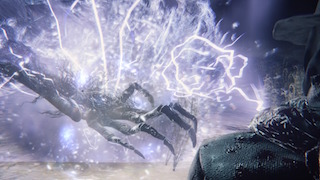 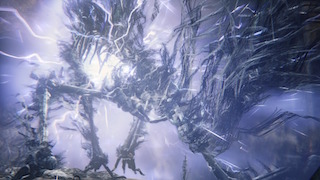 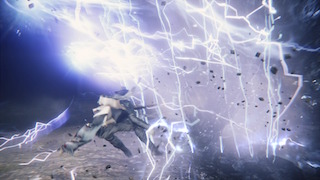 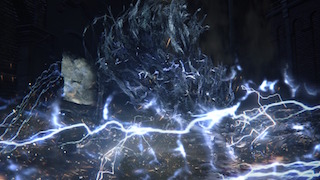 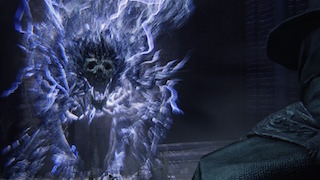 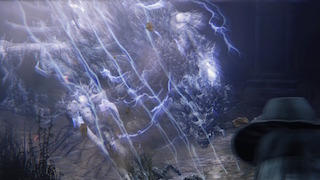 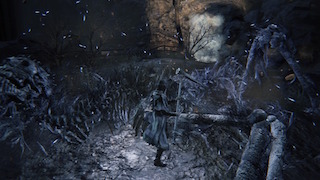 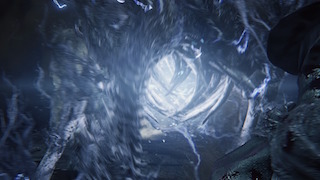 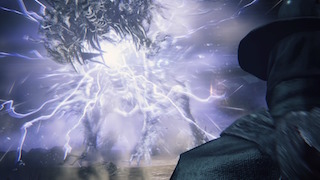