Beast-possessed Soul is an enemy in Bloodborne.

The Beast-possessed Soul is an enemy which is encountered at the bottom of the Healing Church Workshop, and in Chalice dungeons both as a regular mob and a boss. This beast is rather large and can seem overwhelming, particularly to inexperienced hunters.

This enemy has both melee and some pyromancer abilities. It will cast a selection of fire attacks and will use its claws in various combinations. The Beast-possessed Soul  isn't particularly fast, and most players should be able to either counter its move-set, or simply move behind it and use a charged R2 attack.

Most of the attacks can be triggered and countered as they are "telegraphed", and when it is casting fire the player can simply move behind it and keep hacking away. Like most beasts, it is extremely weak to fire.

At 50% health, some of its attacks will gain additional fire effects, such as the jump attack causing an AoE flame burst and its Lunge ending with a fiery explosion.

If it lands its Lunge attack on a player, it will chomp down on the player and become Blood-Drunk. In this state, its eyes will glow red and its attacks gain a significant damage boost. He'll also start using more pyromancy.

Beast-Possessed Souls that are found as enemies in a Chalice Dungeon will attack any living thing they come across, not just the hunter. It is possible to lure one through the whole layer and have it kill everything else for you. If you let it use its Lunge on you and become Blood-Drunk, the power boost will let it go toe-to-toe against even a Merciless Watcher.

Blood Gems dropped are based entirely on the type of labyrinth. 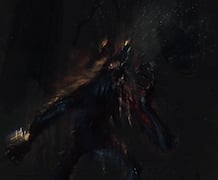 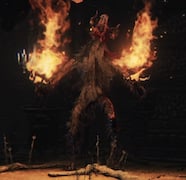 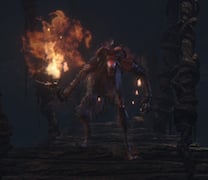