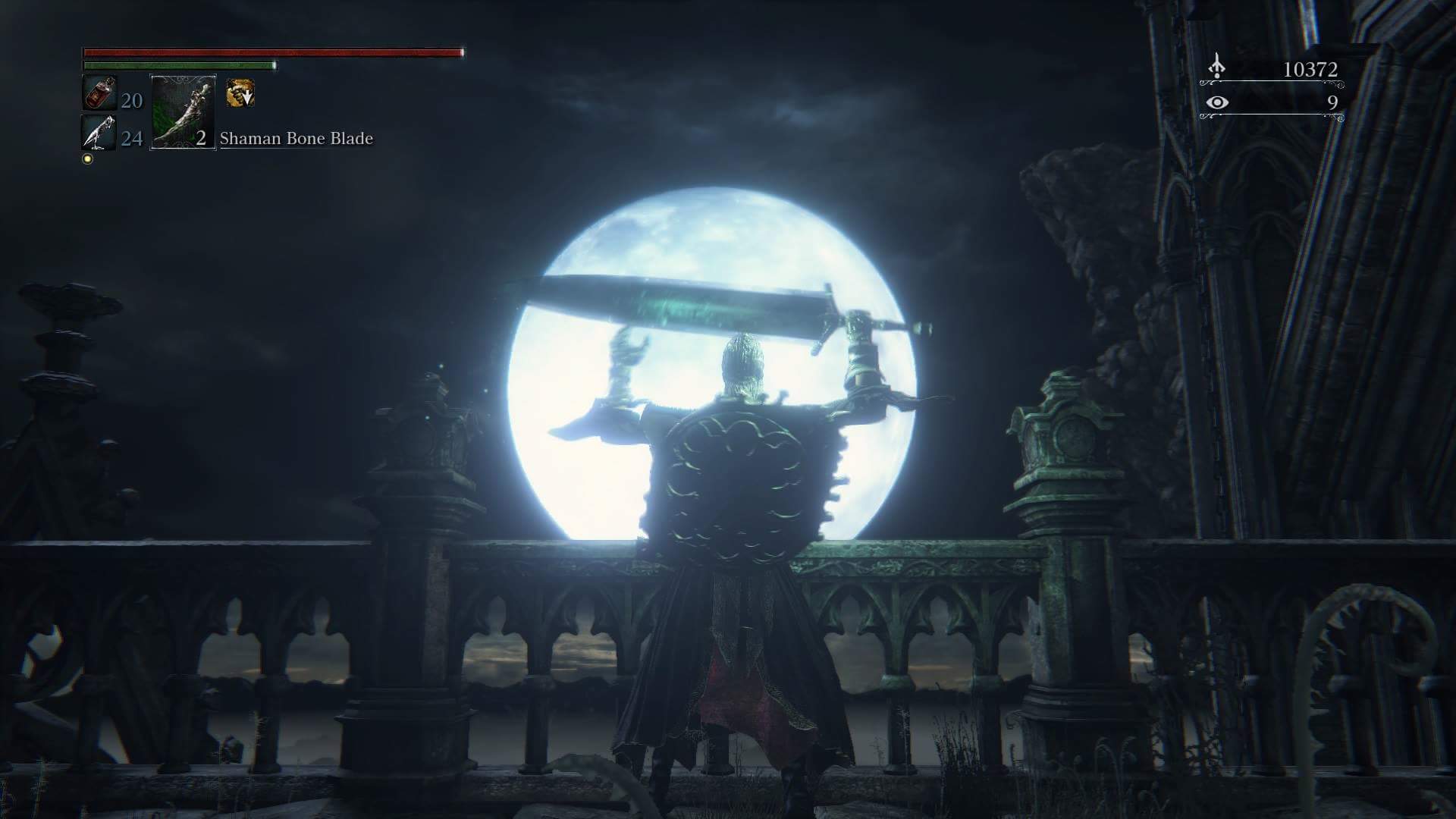 Aria Rosethorn is a player created character in Bloodborne.

From the ambitious student, to the master of the moon and its tides...

Aria Rosethorn was one of the many students that resided within Byrgenwerth in the time before this endless night. As a student under Willem, she was known as one of the few students who, rather than focus on study within the school, took to the streets and outskirts of Yarnham. Carefully studying the disease and malice of her fellow Yarnhamites, helping where she could, whether to cure their illness, or to make their last moments as painless as possible.

Every patient lost, every cough that sprayed blood on her face only strengthened her resolve to find a way to save every soul in Yarnham. She believed in a cure for everything.

Her cure came in the first pilgrimage.

One moonlit night, a group of scholars were heading on an expedition into the tunnels deep below Yarnham. The Tombs of the Gods. Aria had never been to these tunnels, as her search for medicines had only taken her across the surface world. Only a small hunch inclined her to join the party, and journey to the darkness the lie below Yarnham's cobbled streets.

Upon reaching the depths of the Pthumerian labyrinth she discovered the one thing that would save Yarnham from the clutches of pestilence. Or so it would seem.

This thing they found there was the Blood of the Gods. The Old Blood.

With it Aria made miracles happen along side her fellow scholars. Laurence, Edward, and Ludwig. Using this blood, Aria believed that this blood could ascend the people past humans mortality to disease. Eventually convincing him to leave Byrgenwerth and found his own school, as Master Willem would never allow such a potent substance of purity upon the populous. Laurence leaves Byrgenwerth along with Aria and Ludwig.

As Aria established the ministry of Blood Healing, Laurence, in order to expand their operations founded the Healing Church. This church cured anyone who could reach their saintly grasp, and even made some of them stronger than before their disease. The church ushered Yarnham into a beautiful time of purity and happiness. Aria had no doubts that she had done what was right, and continued her ministration without qualms. Little did she know that Laurence was only using blood ministration as a means to a end for his goals did not walk in the shadow of his friend. Quite the opposite really. Laurence did not want to just cure humanity, he wanted to ascend it.

Aria no longer saw her friend upon his construction of the Choir. The last thing he said to her was that "Master Willem will not continue the work he started at Byrgenwerth, so we must do it ourselves."

Years go by as Aria wanders Yarnham, praises ringing in her ears and the applause she gains by simply placing her feet upon the ground of the common man. She knew that Laurence had fallen from their original plan, and knew something that she did not, and something bad was about to happen.

One night as she wished the townsfolk a good evening she was attacked by a massive werewolf creature. The jaws of the beast snapping at her heels as she ran down the alleyways of the town she once felt safe in. Upon reaching a dead end she turned to face the creature. Saliva and blood dripping from its maw. Claws covered in flesh and chunks of bone, and in its eyes, the face of a fellow Yarnhamite that she once knew.

"This is what you wanted Laurence. This is your ascension?" she whispered.

As the beast lunged for her she was blinded by a dark cloak, but this was not enough to shield her from her patients life splatter onto her face and clothes as she screamed in despair. The blade plunged deep into the beast's chest as it let out a screech of pain, and it fell along with her savior.

The figure pulled of its hat and mask. Ludwig was his name.

"Aria. I meant to tell you about this, but I think you already know what I'm going to say..." He said with grief in his voice.

"What is happening? This is Laurence's ascension? His master's work?"

Upon this the sound of a glass bottle shattering could be heard, and from that same direction came the sound of flames roaring up from oil, and the sound of townsfolk burning in the flames. Ludwig escorted her to the balcony area where she saw it all. Beasts were clawing at the black cloaked Hunters as they were swallowed by the inferno that sprung up in the towns cathedral.

"Aria. The Ashen Blood... was a lie. It was created by Laurence as an excuse to use the old blood on a larger scale."

Aria understood. She watched as the people she cured and cared for. Anthony, Clara, Matthew... mothers, sisters, friends... were all slain that moonlit night.

"The red moon hangs low, and beasts rule the streets," She whimpered. "Are we left no other choice than to burn it all to cinders?"

"No other choice remains Aria. No cure resides in the world that can cure something like this. You can not save these people. Not this time."

After the tragedy of Old Yarnham, that very same workshop closed and was boarded off from the rest of Yarnham. Ludwig had founded a group in its place: the Healing Church Workshop.

Aria, now alone as Laurence locked himself in Upper Cathedral ward along with the choir, despaired in what has happened to her beloved people. Seeing Ludwig leave Cathedral Ward every night across the Great Bridge to slay the inhabitants of her city. She could not do anything to save her people anymore, for she was a doctor to humans, not beasts.

Aria watched for the gate to the Great Bridge to open, but unlike every other night Ludwig did not cross. The bridge did not even open. Ludwig must of either grown tired of the hunt, or maybe his quarry resides some where else. Somewhere much closer. The door to her room burst open as hunter with a crow-like visage appeared.

"You are no hunter, but the blood you administered to the people of this city is on your hands." He stated.

The hunter was covered in the stench of murder. The hunter clearly murdered her assigned bodyguards. All twenty of them, for no man of the church led him to her doorstep.

"And what evidence do you have to support your claim? The people call you the Thorn in their side and clearly the folk do not run to your aide at this moment. Must mean you are not that important to them. Aria you must die. I do not like doing this, but go quietly so this city can as well."

The hunter raised his sword above his head and the moon that shined through her tower window danced around his blade. He swung his blade and sent a shadowy lightwave hurtling towards her. The wave struck her in her chest and blasted her against the latticed glass, cracking it across the entire window ruining the image upon it.

He walked closer and placed his blade tip onto her chest preparing to thrust it deep into pure heart inside.

"I do this because I know you would have done this yourself, and I wanted to say goodbye."

"Aria. Accept it. Everything has fallen apart. You can not cure your people."

"But you can make their last moments as painless as possible."

He opened his hand and watched her drop all the way to the bottom of the tower. She watched to make sure she fell to the bottom...

Aria awakens inside a carriage. The first thing she saw upon regaining her sight's clarity was the the moon hanging low concealed by the snow and cold of the mountainous winter. The carriage rocked and bounced riding on the broken stone road. Aria sat up upon the seat inside knowing not what to do except wait for what Ludwig was planning, or rather, how his plan ends. The snow eventually cleared and she bared witness to what she knew as the Forsaken Castle of Cainhurst. Ludwig sent her to Cainhurst. The place that Edward fled to with the "forbidden" blood.

The carriage stops and two knights opened the door. They were dressed in silver decorative armor, wielding curved swords and exotic firearms. Their scabbards were filled with blood.

"Okay ma'am." He said stoically. "Step out of the carriage. We will escort you to meet the Queen."

The knights began to walk forward not bothering to check if she would run off rather than follow, because they knew Cainhurst was her only lead into what Ludwig had done with her. She walked in a fear fueled awe of the castle, as Cathedral Ward always was massive, but the castle was more so. Royalty watched her every step, and even servants were stopping work to see what was to be done. Some watching with concern, some with evil smiles.

Upon reaching the Queens throne a thunderous voice filled the room.

"Aria Rosethorn. Ludwig has told me about you." A deep male voice announces. "Step forward, or submit to our knights."

Aria keeps her head down and kneels before the voice.

"Aria. Ludwig has told me of the acts that the church has performed. We know of the lies that Laurence has shared and the heinous crimes he has committed."

"While we do not fully support your side of the fight, as we require blood to survive, we can give you aid and teach you to fight as the hunters do."

The throne creeks as the man stood up. He walked to her and slides his blade into the scabbard and cloaks the blade in blood.

"Look me in the eyes if you understand what you must do. If you do not feel free to keep your head down. Regardless, you will be given the strength to fight against the church and Laurence."

He placed his blood-soaked blade onto both of her soldiers and was escorted out.

10 years had passed since being granted the status of a knight, and she was about to embark on one of her own personal missions outside of Cainhurst. She was to enter the Hunter's Nightmare to save the blood drunk hunters from their horrible fate. If murder was the cure to suffering it would certainly work in a place where death reigns.

Upon reaching the end of river she was met with an unsightly beast. A monster. A amalgamation of flesh and eyes. A single face looked upon her and hollowed with sorrow. Ludwig.

Upon defeating him his last blessing was the blade she wields today. Ludwig's TRUE holy blade. With this sword she now walks in places where disease hangs about the air. Where people rest upon their beds in hope of release.

Her last words before her vow of silence to honor her fallen friend.

Aria can mostly be found in the Research Hall and Upper Cathedral Ward.